We study the substitution between secured and unsecured interbank markets. Banks are competitive and subject to reserve requirements in a corridor rate system with deposit and lending facilities. Banks face counterparty risk in the unsecured market and incur an opportunity cost to pledge collateral. The model provides insights on interest rates, trading volumes and substitution between the two markets. Using transaction data on the Euro money market, we provide new empirical findings that the model accounts for: (i) borrowing banks are active on both markets even when their collateral constraint is not binding, (ii) secured interest rates may fall below the deposit facility rate. We derive and empirically test predictions on how "conventional" and "unconventional" monetary policies impact interbank markets, depending on whether marketable collateral is purchased or not. 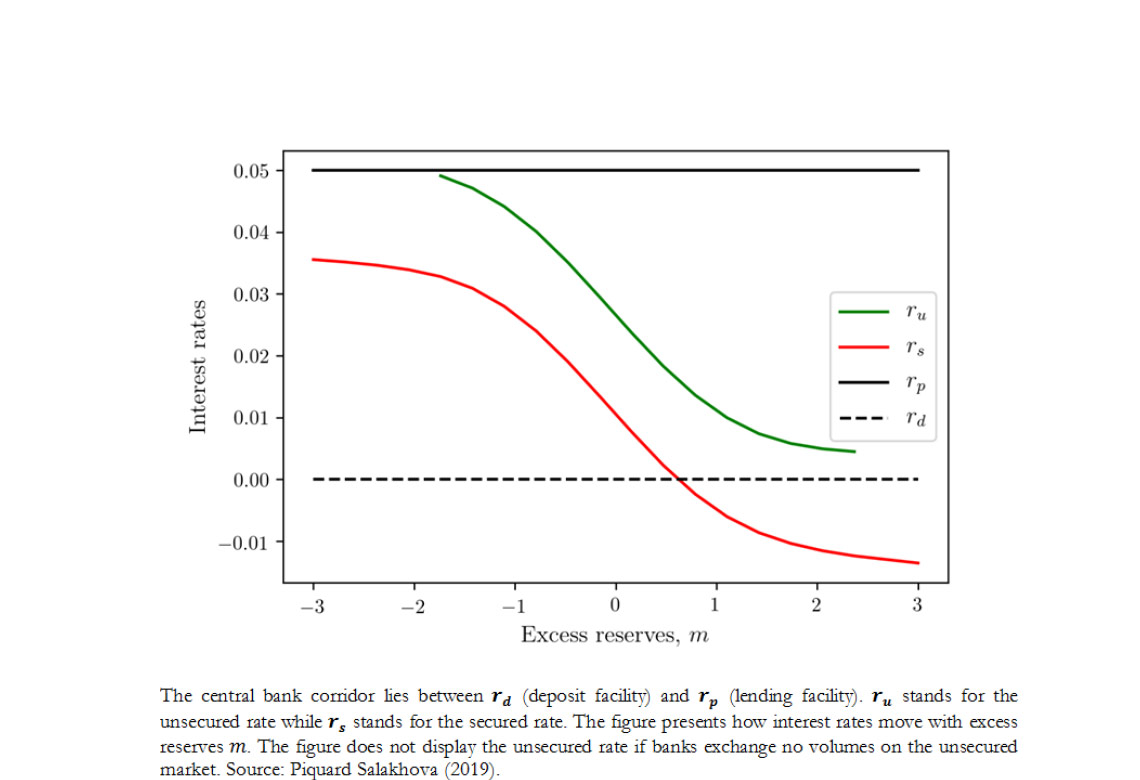 Secured and unsecured money markets are prime short-term funding markets for banks. They play a key role in the transmission of monetary policy, and while the interbank unsecured interest rate is the actual monetary policy target of most central banks around the world, the repo market has only recently attracted attention of policy makers when repo rates went below the deposit facility rate. However, there is still lack in understanding how banks decide in which market to trade, and how the two markets co-exist and react to monetary policy.

In this paper, we study the joint behaviour of banks in the unsecured and secured markets.

Some questions that we aim to address in this paper include; do banks borrow on the unsecured market because of collateral shortage? Why and when can repo rates go outside of the monetary policy corridor? What is the role of unconventional monetary policy and counterparty risk in the allocation between the two markets?

We start by documenting new empirical facts regarding these markets. We use transaction level data from the payment system TARGET2 to retrieve the unsecured interbank loans and a unique dataset from the Eurex GC Pooling market, an interbank market operated by Eurex. We first show that banks may borrow on both markets, even when their collateral constraint is not binding. This new finding sheds light to former theoretical contributions. It reveals that banks funding policy does not follow a pecking order; they do not strictly prefer a type of funding to the other. Instead, unsecured and secured borrowings are imperfect substitutes for banks. Second, we document that both unsecured and secured volumes drop when excess reserves rise, confirming evidence from the literature. Third, we show that increasing excess reserves drives the unsecured rate to the ECB deposit facility rate, but the rate in the secured market may fall below the deposit facility rate when excess reserves are high. This fact is surprising because neither imperfect competition with non-banks, nor repo specialness (the need to hold a specific security) is present in our data. These two usually explain why the repo rate may fall below the deposit facility rate. Indeed, in our data, the participants are only European banks, and lenders do not receive special securities but a claim on a basket of collateral managed by Eurex.

Then, we build a model that is able to account for such stylized facts. Like the benchmark model from Poole (1968), banks are subject to shocks on their reserve holdings in a corridor rates system with reserve requirements. However, banks can lend or borrow simultaneously in the two markets: the unsecured and the secured one, in exchange for collateral. We introduce two financial frictions: lending banks face counterparty risk in the unsecured market, and all banks incur an opportunity cost of collateral, that is, they derive some additional utility from holding bonds that unpledged in the secured market.

Finally, we show how "conventional" and "unconventional" monetary policies differently affect interbank markets. While the two monetary policies similarly affect aggregate volumes and the unsecured rate, they change the substitution and spread between the two markets because they have opposite effects on the opportunity cost of collateral. Empirical tests confirm such predictions: the VLTRO and APP similarly affect unsecured interest rates while the secured rates relatively decrease when the central bank purchases marketable collateral.