Working Paper Series no. 792: Set-up Costs and the Financing of Young Firms

We show that set-up costs are a key determinant of the capital structure of young firms. Theoretically, when firms face high set-up costs, they can only be established by leveraging up and lengthening debt maturity. Empirically, we use a large sample of French firms to show that young firms have a significantly higher leverage and issue longer-maturity debt than seasoned companies. As predicted by the model, these patterns are stronger in high set-up cost industries and for firms with lower profitability. Last, we show that, following an exogenous shock that reduces banks' supply of long-term loans, young firms in high set-up cost industries grow significantly less. 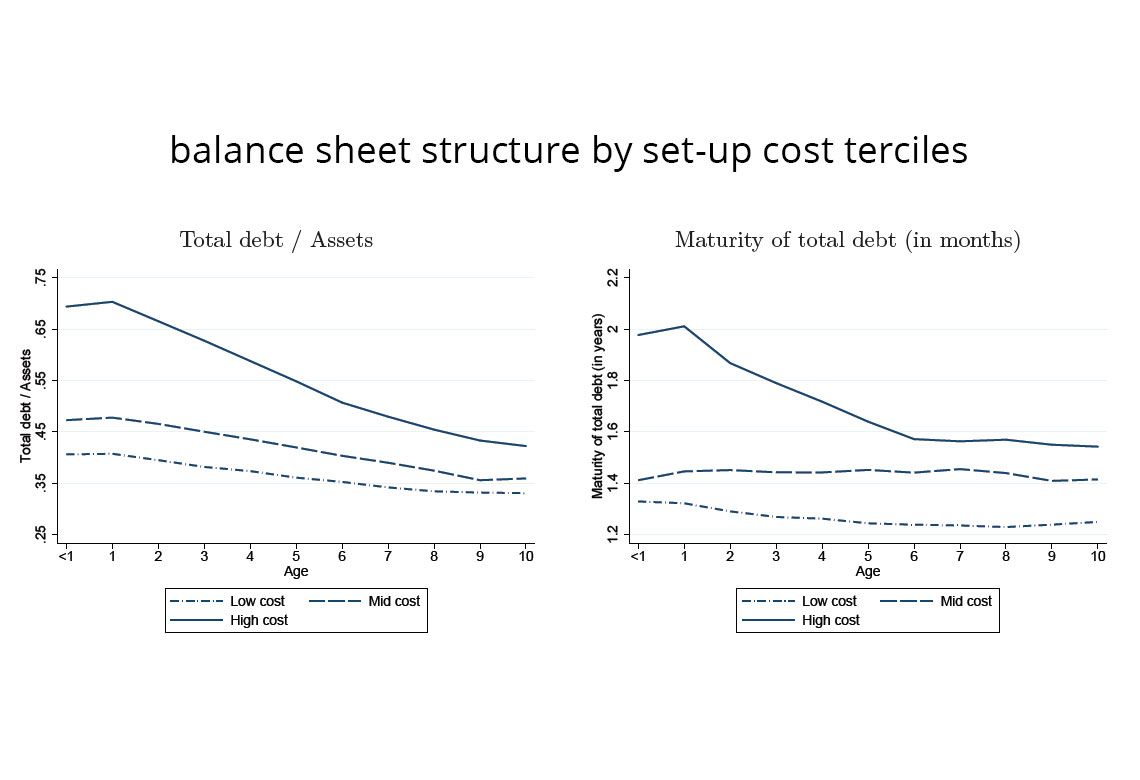 Despite the importance of young firms in the economy, little is known about their financing and their capital structure, due to severe data limitations. We start by documenting two facts using a large sample of French corporations: young firms have higher leverage and longer-maturity debt than seasoned companies. These facts are a priori surprising if one accepts the usual assumption that young firms are more subject than older firms to adverse selection and moral hazard frictions. Indeed, in standard models, such frictions are associated with lower external financing of any type, whether equity or debt. Conditional on accessing debt markets, these models also predict low leverage and short-term maturities for the most constrained firms.

In this paper, we propose an explanation for these facts, and test a rich set of associated predictions. In sum, the key feature that can reconcile theory and data is the existence of fixed set-up costs, i.e., of a minimum quantity of tangible or intangible assets a firm needs to start operating in a given industry. When firms face set-up costs that are large relative to the entrepreneur's initial net worth, they need to turn to external financiers. Provided they have limited cash flows when they are young, their ability to repay debt each period is limited. The only way to finance set-up costs is thus to lengthen debt maturity, provided the debt contract remains feasible. These effects are magnified in industries in which set-up costs are higher.

To formalize predictions on the role of set-up costs, we first develop a simple three-period model with moral hazard, inspired by Holmstrom and Tirole (1997). This model generates three main testable predictions. First, in industries with higher set-up costs, initial leverage and debt maturity are higher, and decline more quickly as firms age. Second, within industries characterized by a given set-up cost, firms with lower initial profitability should borrow with longer-term debt. Third, when the ability of financiers to supply longer-term debt is impaired, there can be heterogeneous effects across industries with different set-up costs: the patterns of firm creation and growth will differ across industries. In other words, set-up costs are not only important for firms' capital structure, but also for the transmission of bank shocks.

Building on this simple model, our main contribution is empirical. We take these hypotheses to the data, using several sources, including balance sheet data on a random 20% of all firms created in France between 2006 and 2016, and detailed loan-level data from the Banque de France. We then turn to formal tests using regressions. This allows us to include a variety of controls, as well as firm and time fixed effects. We confirm the finding that, within a given firm and after removing time effects, leverage and debt maturity decrease with age. We additionally confirm that, within industries with a given set-up cost, firms with lower cash flows borrow with longer-maturity debt. In the second part of the paper, we show that set-up costs are an important determinant of the transmission of financial shocks to the real economy. We do so using a quasi-natural experiment: the failure in 2008 of Dexia, a large French-Belgian bank lending to French municipalities. Following this shock, municipalities previously relying on loans from Dexia increasingly borrowed, at long maturities, from other banks with whom they had pre-existing relationships. These banks were then constrained to cut the maturity of new loans to corporations. In difference-in-differences regressions, we confirm that treated banks reduced the maturity of new corporate loans after Dexia's failure. Firms in high set-up cost industries, for which the availability of long-term financing is more important, were more severely hit. Two years after initial loans were made, young firms in high set-up cost industries and borrowing from treated banks were smaller and held less fixed assets.