Working Paper Series no. 634: Should euro area countries cut taxes on labour or capital in order to boost their growth?

The large imbalances within euro area have led to renew interest in tax policies that could reduce labour costs and thus improve competitiveness and growth. In this paper, we consider whether it would be more growth-enhancing for euro area countries to, instead, use capital income tax cuts. To address this issue, we focus on the open-economy dimension and make the simplifying assumption of complete insurance markets. Using a DSGE model calibrated for France within the euro area, we show that the increase in output resulting from tax cuts on capital income would indeed be higher than the increase in output resulting from tax cuts on labour, both in the short and long run. Importantly, the strong response of output to capital income tax cuts appears to be partly explained by the particularly high level of capital income taxes in France. Moreover, such tax cuts would be less efficient if they were expected to be only temporary. Finally, we illustrate our main points through a recent fiscal package implemented in France, which combines labour and capital income tax cuts. After briefly assessing this package, we find that investment and real output would have been more strongly boosted in the medium run if this package had been focused to a larger extent on reductions in capital income taxes. 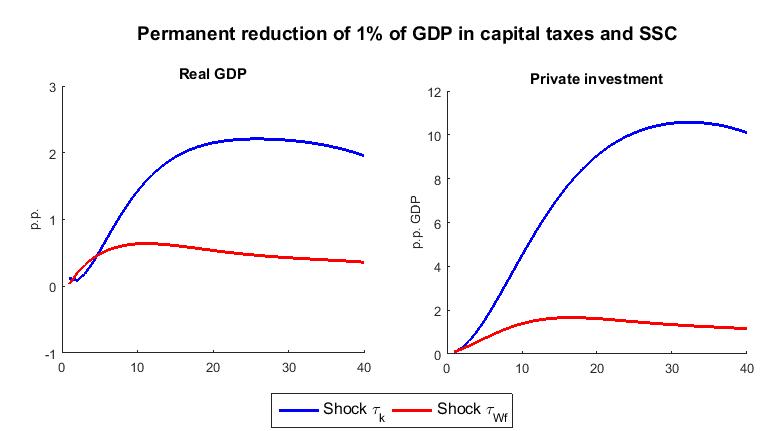 Since the launch of the euro, internal imbalances have been a strong feature of the euro area. In the absence of exchange rate adjustment, some international institutions have recommended cutting labour taxes, for example through a shift toward the consumption tax, for improving competitiveness, employment and growth in countries which suffer from current account deficits (e.g. IMF and European Commission).

In this paper, we consider whether it would be more growth-enhancing for euro area countries to use capital income tax cuts rather than labour tax cuts. In contrast with the literature on optimal taxation, we adopt here a positive approach, where we just try to assess what DSGE models with usual frictions can tell us about the impact of such taxes on key macroeconomic variables, instead of looking at their optimal level with respect to welfare. We also choose to focus on the open-economy dimension and to leave for further research the analysis of such effects for incomplete insurance-market economies.

The contribution of this paper is twofold. In a first stage, we provide simple intuitions about the different impact of these two instruments on economic growth by using a simple Real Business Cycle (RBC) model. Indeed, we demonstrate the stronger long-run effect on output for permanent reductions in capital income taxes. Moreover, this effect is non-linear: the size of this effect increases with the level of capital income tax from which the cut is implemented. Second, we refine this quantitative analysis by building a larger DSGE model with more realistic features and calibrated for France within the euro area. Against this backdrop, we show that permanent shocks on capital income taxes have a stronger impact on output both in the short and long run. This conclusion is reinforced for France, given the high level of capital income taxation compared to the rest of the euro area. Still, reductions in capital income taxes would be less efficient if they are only temporary, or alternatively if their implementation is perceived as imperfectly credible.

We also illustrate these points by taking into account a package of fiscal reforms implemented in France since 2013: the “Credit d'Impôt pour la Compétitivité et l'Emploi” (CICE), which was subsequently incorporated into a broader Responsibility and Solidarity Pact (“Pacte de Responsabilité et Solidarité” - PRS) in January 2015. Roughly speaking, these reforms involve reductions in labour and capital income taxes, financed by tax hikes on consumption and decreases in government spending. We first provide an assessment of this package as it was implemented. Then we show that it would have raised investment and output by a larger amount if the tax cuts had been more focused on capital income. With such an alternative package, employment would have fallen somewhat in the short run (due to a degree of substitution in capital for labour) but would have risen more in the medium run given the higher increase in output.

For these quantitative simulations, we build a DSGE model with the following features. First, its core incorporates the main frictions necessary for obtaining realistic impulse responses. Second, the French economy is modeled as an open-economy which trades with the rest of the euro area (REA) and an exogenous rest of the world, so as to take account of the effect of competitiveness gains. Third, the reduced weight of France within the monetary policy matters for the real interest rate reaction and its impact on investment dynamics. Fourth, we distinguish between public investment and public consumption to account for a potential negative impact of governments' investment cuts on the supply side of the economy.

publication
Working Paper Series no. 634: Should euro area countries cut taxes on labour or capital in order to boost their growth?
Download (EN)