The procedure for overindebtedness was born in the late 1980s, in a context of strong expansion of consumer credit. In 2010, better supervision of business practices by the public authorities helped to limit the scale of consumer credit. Overindebtedness now concerns financially fragile populations with low levels of debt. The main goal of this paper is to set up an explanatory model of overindebtedness. A first model highlights the significant impact of the standard of living on being overindebted. However, disparities remain between family structures. The main limitation of this first model is the fact that it relies essentially on aggregated data. Therefore, a second model, which is focused on the population of overindebted households only and uses a rich database, allows accounting for different factors playing a role in the orientation towards personal recovery, which is the orientation that is offered to the most financially vulnerable overindebted households. 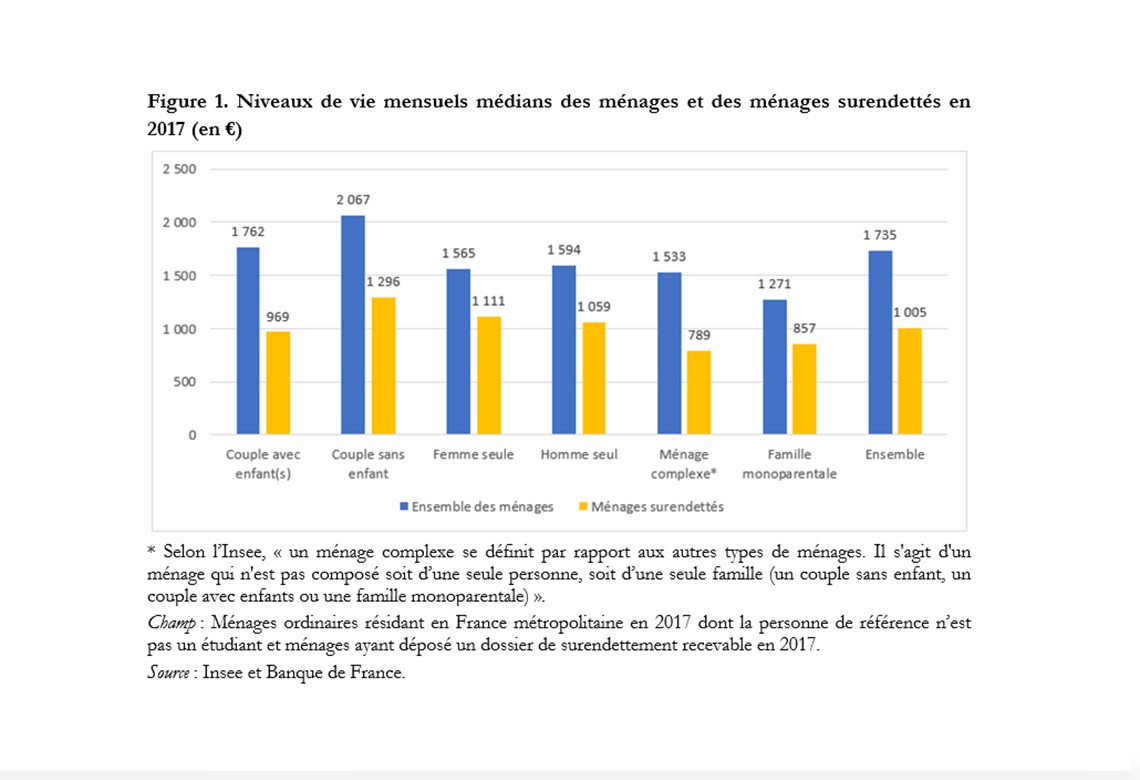 This paper aims at presenting the main factors playing a role in being an over-indebted household in France. The procedure for over-indebtedness was born towards the end of the 1980s, in a context of strong expansion of consumer credit and lack of supervision of the latter. The goal of this procedure is to provide solutions for households who struggle with their non-professional debts. Since 2010, better supervision of commercial practices by public authorities has made it possible to considerably limit the scale of consumer credit. Today, households affected by over-indebtedness are therefore mainly vulnerable low-income households. In 2019, a study conducted by the Banque de France, for example, highlighted single women with children being over-represented among over-indebted households. Therefore, our goal will be to present a statistical modelling of over-indebtedness in France.

In order to analyze the impact of several factors in being over-indebted, it is necessary to analyze the characteristics of all French households. However, individual household data is not available. An alternative solution is to construct a database of simulated households using aggregate information available on family structure and household income (part 1). The former database is then used to implement a statistical model that makes it possible to quantify the respective impacts of the two factors considered (part 2). Finally, the final part of the study looks at the actual population of over-indebted households and identifies the factors that determine orientation towards personal recovery, which is the solution offered to over-indebted households with the most deteriorated financial situations (part 3).

These analyses show that the standard of living remains the key factor in over-indebtedness (see figure 1). Its impact is all the more important as the initial financial conditions are weak: while an income supplement will have a negligible impact for a well-off household, it would significantly reduce the likelihood for a household with a modest income of being over-indebted. However, family structure also plays a significant role, for equal standards of living: single parents, for example, are most likely to be affected by over-indebtedness, other things being equal.

Personal recovery is the solution offered by the commission to households whose financial conditions are such that no recovery plan can be suggested. This implies the total erasing of the debts owed. Among over-indebted households, those who are oriented by the commission towards this solution are also those whose living conditions are the most deteriorated: unemployed, low-income individuals, single-parent families or single men are the most vulnerable to this situation. Those households also very often have low amounts of debt compared to other over-indebted individuals. As a result, in 2019, only 26.6% of overall debt was owed by those households.