We propose a novel approach to quantify spillovers on financial markets based on a structural version of the Diebold-Yilmaz framework. Key to our approach is a SVAR-GARCH model that is statistically identified by heteroskedasticity, economically identified by maximum shock contribution and that allows for time-varying forecast error variance decompositions. We analyze credit risk spillovers between EZ sovereign and bank CDS. Methodologically, we find the model to better match economic narratives compared with common spillover approaches and to be more reactive than models relying on rolling window estimations. We find, on average, spillovers to explain 37% of the variation in our sample, amid a strong variation of the latter over time.[

Assessing spillovers between financial assets is a difficult exercise. When a shock occurs in one market and then spreads to others, prices of those markets are affected in a quasi-contemporary manner. It is difficult then, ex post, to identify the source of the shock and thus to distinguish correlation from causality in the movement of financial time series.

Moreover, the magnitude of the transmission of such shocks is not stable over the observed period. Therefore, a good spillover model should not only succeed in identifying the shocks in question, but also take into account the time-varying effects they have on other markets. Several papers in the literature have proposed to solve this problem by estimating models on rolling windows. However, this methodology has downsides: in rolling windows new observations have little weight compared to past observations, so that such model lack in responsiveness.

In this paper, we propose a novel model to quantify spillovers based on the work of Diebold and Yilmaz (2009) and Lütkepohl and Milunovich (2016). We estimate this model on sovereign and bank Credit Default Swaps (CDS) in the Eurozone. More specifically, we use this methodology to assess the national and international propagation of credit risk shocks and to analyze the extent of the sovereign-bank nexus across countries.

Our main results are methodological. By comparing our estimates with those of other models used in the literature, we observe a superior performance of our methodology with respect to the two issues mentioned: the identification of shocks and the reactivity to new events. Concerning the identification of shocks, we compare the capacity of the models to clearly distinguish between bank and sovereign shocks. For example, during the Italian political crisis of May 2018, Italian bank and sovereign CDS spreads increased significantly at the same time, thus reinforcing the likelihood for any spillover model to mistake this sovereign shock for a bank shock. As shown in the graph below, for this particular event the SVAR-GARCH model we propose is the only one correctly identifying the shock. Analysing the performance more generally  on a large list of bank and sovereign events, the SVAR-GARCH compares favourable to competing models. Concerning the reactivity of spillover estimates, we compare the different methodologies by performing Granger causality tests. We find that the estimates produced by the SVAR-GARCH model are more reactive, especially compared to models estimated on rolling windows.

We also present economic results that further support our identification strategy: The spillovers the model produces retrace well the Eurozone crisis; for example by underlining the importance of Irish shocks at the beginning of the crisis, followed by a rise of Italian and Spanish shocks. Moreover, we find that the spillover estimates are positively associated with channels of credit risk transmission that the theoretical and empirical literature suggests.

All in all, the model we propose appears well suited for estimating spillovers between CDS markets, combining an attractive identification approach with time variation in the spillover estimates, while contributing to the active literature on methodologies for spillover estimations. Moreover, to the extent that our model imposes relatively few restrictions, it lends itself to be a useful tool for the analysis of spillover dynamics on a broad set of financial markets, instruments and variables. 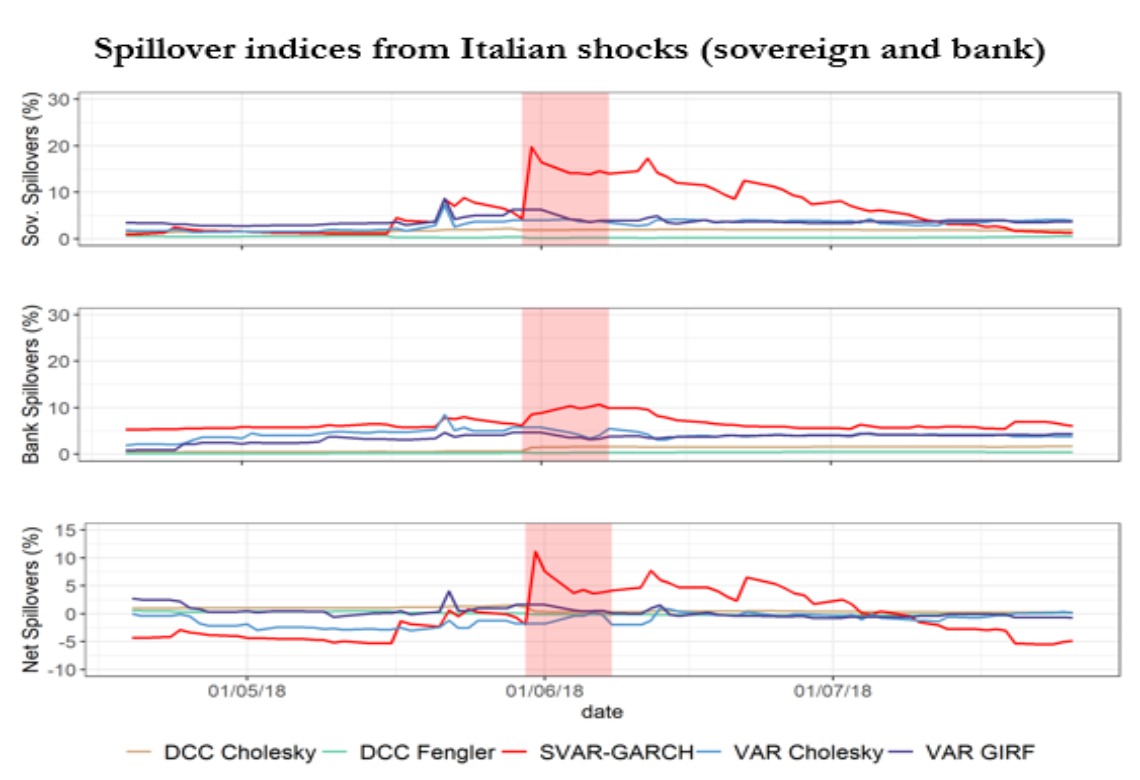