Working Paper Series no. 699: Taxation of Savings and Portfolio Choices of French Households

France is the European country in which, together with the United Kingdom, the taxation of saving is highest (6% of GDP in 2016, against on average 3.8% in the European Union and 3.5% in the euro area). This situation is evaluated with regard to the theoretical debate on optimal taxation. Although no clear-cut conclusion can be drawn from that debate, it appears that the “dual Nordic” is nowadays widely considered as satisfying. However, theoretical research tends to underestimate the genuine tax burden, as they do not take two factors into consideration, namely cumulated taxation and inflation. In fact, although taxation is only one the factors that influence the allocation of assets, it plays an important role in savers’ choices. As an illustration, an evaluation of the impact of the newly-created ‘prélèvement forfaitaire unique’ (single flat tax on saving income) is provided by Christian Pfister. 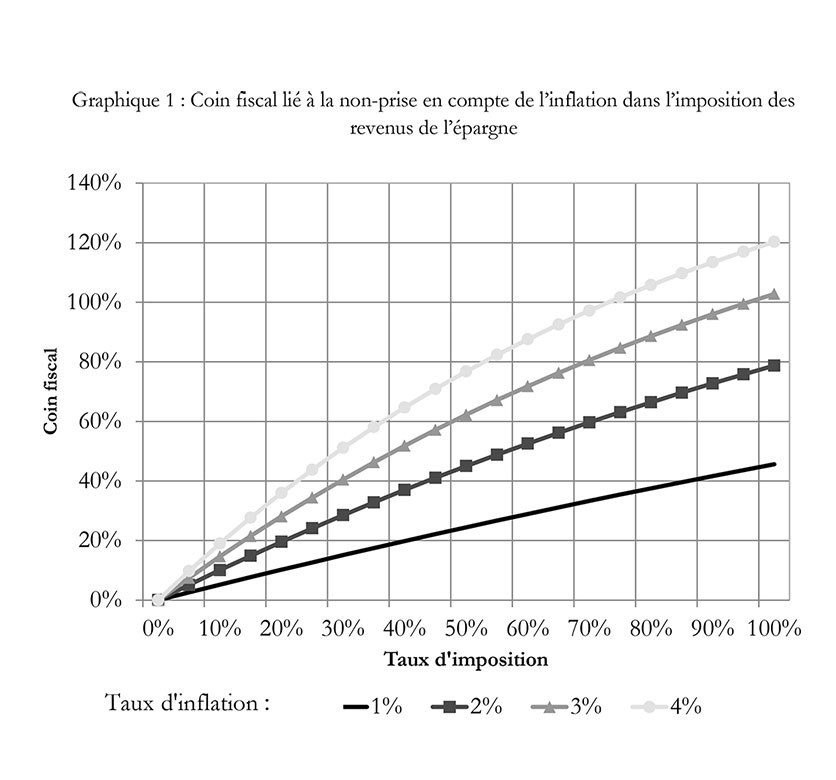 France is the European country where, along with the United Kingdom, savings taxation is the highest (6% of GDP in 2016, compared to an average of 3.8% in the European Union and 3.5% in the euro area). This high level of taxation in France reflects the very strong increase in taxes on household capital income since the crisis (+0.8 point of GDP since 2007 compared with +0.1 point in both the EU and the euro area), with in particular the increase in social security contributions and above all the fact that capital income has then been subjected to the income tax (IR) scale. On the basis of this observation, the paper first examines the appropriateness of the taxation of household savings in France with regard to theory. In a second step, it assesses the impact on asset allocation and the financing of the economy. The emphasis is on financial savings, particularly in the second part.

The theoretical debate focuses on the notion of optimal capital taxation. Although this debate does not deliver a clear-cut conclusion, it appears that the Nordic dual system, where labour income is taxed according to a progressive scale and capital income is taxed proportionately, at a low or median rate, can be seen as a "reasonable" compromise between economic efficiency and redistribution objectives. However, theoretical research tends more often than not to underestimate the real weight of compulsory taxes because it does not take into account two factors: the cumulated effect of taxes on income on capital, on capital itself and on its transmission; and inflation, as taxation is based on nominal income and not on real income, which in principle matters alone to savers.

French savers are not irrational and do not bear the mark of a "risk allergy". It is therefore the risk/return characteristics of the different asset classes that determine their portfolio allocation in the first place. This is reflected both in what they themselves say when questioned in surveys and in the possibility, on this basis, of properly accounting for their financial asset allocation at the aggregate level. In addition to other factors (level of financial education, still insufficient size of French financial markets, quality of financial advice, regulatory incentives), the taxation of savings nevertheless plays an important role. The orientation of French households’ financial investments is strongly biased in favour of financial products with preferential tax treatment. In 2000, life insurance and regulated savings accounted for 44% of these investments (including 27% and 17% respectively); in 2017, they accounted for 54% (including 39% and 15% respectively). By way of an illustration, the consequences on the allocation of households’ portfolio of the introduction of the single flat-rate tax (PFU), which brings our tax system closer to the Nordic dual system, are assessed using a model of the allocation of French households’ portfolio. It appears that in the long term the PFU would mainly result in a substitution of equity investments for life insurance, PEP and bonds. In addition, in the case of a PFU that would be extended to all financial investments, the substitutions in favour of equities would be reinforced, while investments in passbook accounts would be penalised.

However, implementing a look-through approach to French financial intermediaries shows that a growing share of household savings finances the rest of the world. Under these conditions, seeking to use the taxation of savings to "channel" it towards financing residents would be unlikely to be effective.