In this paper, we document the presence of “technology-induced” trade in France between 1997 and 2007 and assess its impact on consumer welfare. We use the staggered roll-out of broadband internet to estimate its causal effect on the importing behavior of affected firms. Using an event-study design, we find that broadband expansion increases firm-level imports by around 25%. We further find that the “sub-extensive” margin (number of products and sourcing countries per firm) is the main channel of adjustment and that the effect is larger for capital goods. Finally, we develop a model where firms optimize over their import strategy and which yields a sufficient statistics formula for the quantification of the effects of broadband on consumer welfare. Interpreted within this model, our reduced-form estimates imply that broadband internet reduced the consumer price index by 1.7% and that the import-channel, i.e. the enhanced access to foreign goods that is allowed by broadband, accounts for a quarter of that effect. 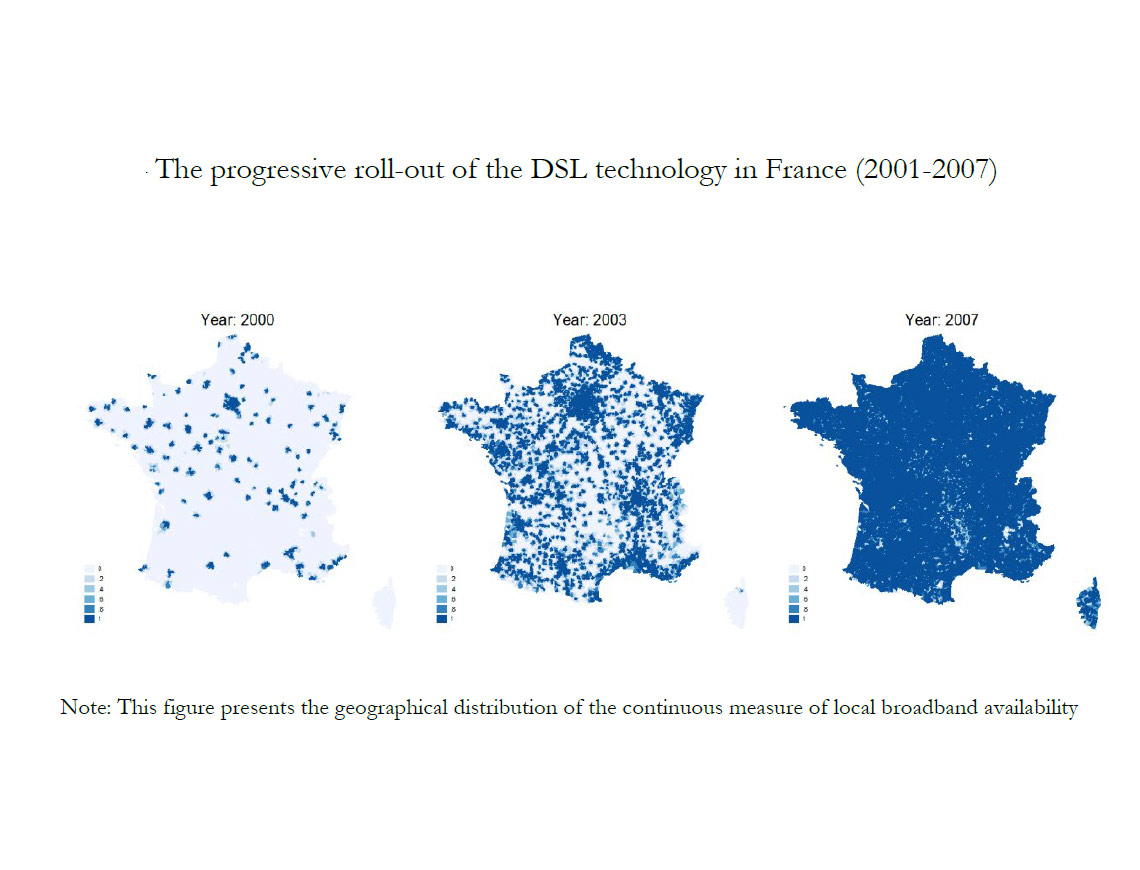 From 1995 to 2008, the value of imports by high-income countries has grown twice as fast as global GDP. This acceleration of globalization has induced well documented labor market impacts as well as rises in consumer welfare through lower prices and gains in varieties. This period was also characterized by radical innovations in information and communication technologies (ICT) and by their rapid diffusion throughout the world economy. It is most likely that the “ICT revolution” lowered the cost of carrying out international transactions and contributed to raising the pace of economic integration. To the extent that ICT facilitated international trade, part of the consumer gains induced by trade development should be attributed to the diffusion of ICTs. In this paper, we test this proposition by estimating the effect of the diffusion of broadband internet on the importing behavior of French firms from 1997 to 2007 and by developing a theoretical framework to assess the impact of broadband-induced imports on consumer welfare.
We exploit the gradual roll-out of broadband internet in France, which was staggered over several years due to limited funding and completed primarily in order to maximize population coverage with only limited attention paid to local economic conditions. This setup provides natural ground for an event-study identifying how ICT availability affected firms’ importing behavior.
We find that the local access to broadband internet leads to a surge in the total value of firm-level imports. Our point estimate implies a 25% increase after five years. When applied to our estimating sample and taking into account dynamic effects, the aggregate effect of broadband expansion on the value of imports in constant dollars over the 1997-2007 period was to increase its growth rate from 75% to 91%, i.e. 16 p.p. or 21%.  We further document changes in importing activities along several margins. We find that the increase in the overall value of imports is primarily associated with an increase in the number of flows and find no effect on the average value per flow (where a flow is defined as the combination of an importing firm, an origin country and a specific product). All types of goods (intermediary, consumption and capital) are affected. We also find that broadband internet has a positive impact on firm performance as measured by value-added and sales. Importantly, the import-intensity of firms increases: the ratio of imports over sales is positively affected and the share of domestic inputs in overall consumption of intermediates declines.
In the final part of the paper, we assess the welfare implications of our empirical findings through the lens of a simple but general theoretical model of firm-level imports. Under our preferred values for calibrated parameters, our event-study estimates imply that broadband internet led to a price index decrease of 1.7%. The import channel contributed up to 0.48%, i.e. about one quarter of the overall effect.