Working Paper Series no. 740: A Theory of Falling Growth and Rising Rents

Growth has fallen in the U.S., while firm concentration and profits have risen. Meanwhile, labor’s share of national income is down, mostly due to the rising market share of low labor share firms. We propose a theory for these trends in which the driving force is falling firm-level costs of spanning multiple markets, perhaps due to accelerating IT advances. In response, the most efficient firms (with higher markups) spread into new markets, thereby generating a temporary burst of growth. Because their efficiency is difficult to imitate, less efficient firms find markets more difficult to enter profitably and therefore innovate less. Eventually, due to greater competition from efficient firms, within-firm markups actually fall. Despite the increase in the aggregate markup and rents, firm incentives to innovate decline—lowering the long run growth rate. 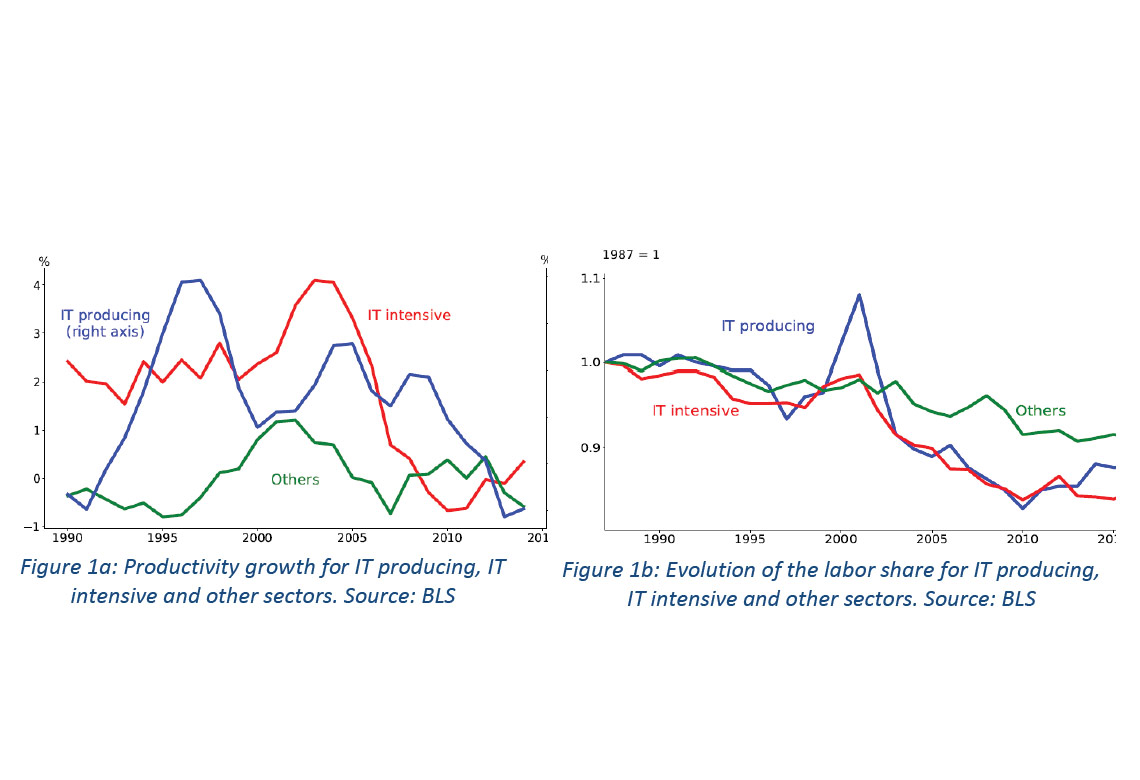 Over the past 30 years, the United States economy has been characterized by a number of macroeconomic facts that have been extensively discussed in the literature. First, growth has fallen continuously since the 1970s to reach a historical low in the last decade, with the important exception of the period 1995-2005 during which the US experienced a short wave of productivity. Meanwhile, labor’s share of national income has been declining quickly around the end of the 1990s, a decline that is mostly due to a composition effect: low labor share firms progressively gained more market power and became larger over time. As a result, the sectoral concentration, that is, the share of a sector total sales that is accounted for by its largest firms have been increasing. While many stories have been developed to account for these changes, the rapid development and diffusion of IT technologies are likely to be one of the main driving force. Evidence presented in Figure 1a show that IT intensive sectors did experience a burst in productivity growth during the 1995-2005 period, followed by an important decline. In addition, those sectors are also characterized by a larger declined of their labor share.

In this paper we construct a theory of endogenous growth with heterogeneous firms which potentially speaks to these facts. In our model, firms grow by investing into R&D in order to add more product lines, but face an overhead cost that makes it difficult to manage an increasing number of products.

Our story is that the IT wave have resulted in a reduction of this cost and thus in an increase in the span of control of firms. As a result, the most efficient firms, which are characterized by a low labor share, expanded to a higher fraction of lines.

Since high productivity firms have higher markups and lower labor shares on average across their product lines, their expansion into more markets results in an increase in the aggregate markup and a reduction of the aggregate labor share. This is entirely driven by firm composition rather than within-firm changes. Within-firm markups can actually fall, as the quality leader on a product line is more likely to face a high process efficiency competitor. Competition from an efficient follower can limit the leader’s markup whether the leader is a high or low process efficiency firm.

Thus, while the IT wave induces a burst of growth in the short run, in the long run the fall in overhead cost may lead to a slowdown in productivity growth. The expansion of high productivity firms into more lines eventually deters innovation because innovating on a line where the incumbent firm has high productivity yields lower profits. Both high and low productivity firms eventually curtail their efforts at creative destruction, knowing they will face stiffer competition. This can outweigh the positive direct effect of a downward shift in the overhead cost on R&D incentives, such that long run innovation and productivity growth may fall.

We then calibrate the model to show that it can quantitatively account for a large part of the macroeconomic facts described above, and qualitatively reproduce the short wave of productivity preceding the decline in growth.