We examine the gains from globalization in the presence of firm heterogeneity and potential resource misallocation. We show theoretically that without distortions, bilateral and export liberalizations increase aggregate welfare and productivity, while import liberalization has ambiguous effects. Resource misallocation can either amplify, dampen or reverse the gains from trade. Using model-consistent measures and unique new data on 14 European countries and 20 industries in 1998-2011, we empirically establish that exogenous shocks to export demand and import competition both generate large aggregate productivity gains. Guided by theory, we provide evidence consistent with these effects operating through reallocations across firms in the presence of distortions: (i) Both export and import expansion increase average firm productivity, but the former also shifts activity towards more productive firms, while the latter acts in reverse. (ii) Both export and import exposure raise the productivity threshold for survival, but this cut-off is not a sufficient statistic for aggregate productivity. (iii) Efficient institutions, factor and product markets amplify the gains from import competition but dampen those from export access. 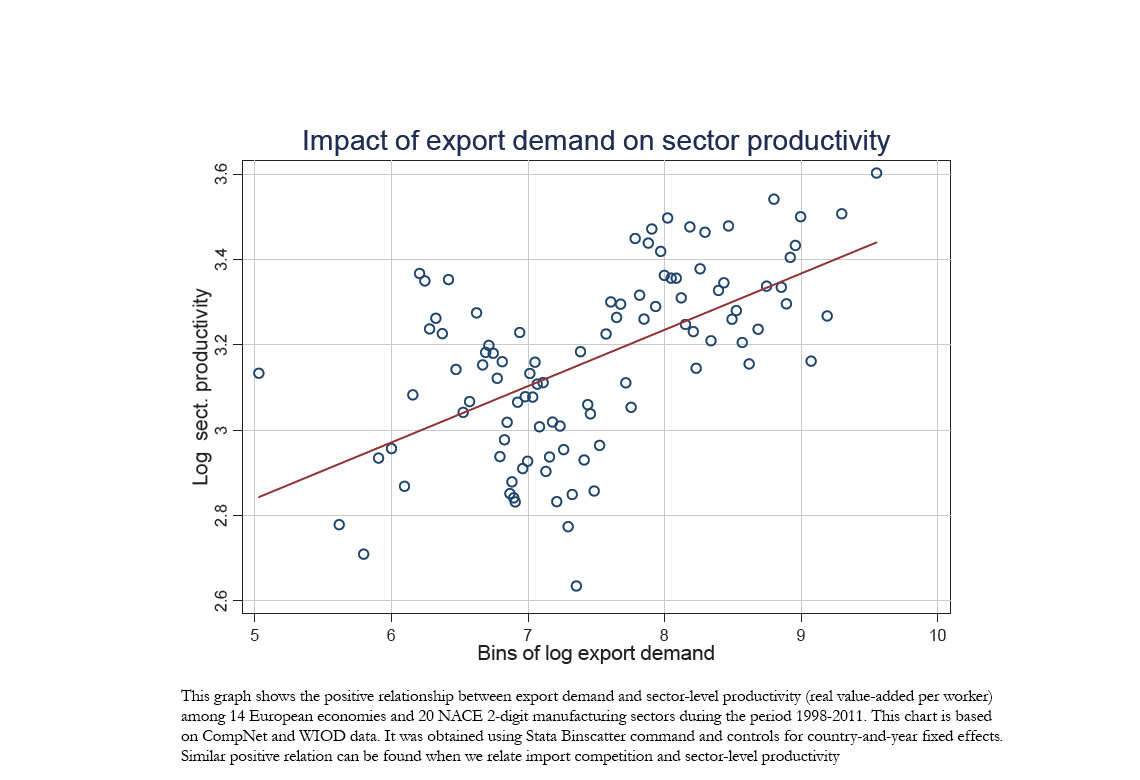 World trade has grown faster than world GDP since the early 1970’s, and it expanded twice as quickly between 1985 and the Great Financial Crisis. Of great policy interest is how globalization affects aggregate productivity and welfare, and how its impact differs across countries at different levels of economic development. In advanced economies, increased competition from low-wage countries has exacerbated public debates about the gains from trade, amidst rising concerns about employment, inequality and China’s dramatic expansion. In developing countries, trade reforms interact sometimes with weak fundamentals and have not always yielded all the desired benefits.
In this paper, we examine the welfare and productivity gains from globalization due to trade openness via export and import liberalization. We are particularly interested in the role played by market frictions, as they can potentially modify the gains from trade compared to theoretical frameworks where the allocation of resources between different firms follow the first best optimum. In the theory developed in the paper, these frictions take the form of implicit taxes or subsidies faced by firms operating in a given sector, which generate a “misallocation” of productive resources between firms. We evaluate how trade liberalization scenarios impact aggregate productivity and welfare depending on the intensity of these frictions.
We show theoretically that without distortions, bilateral trade or export liberalizations increase aggregate welfare and productivity, while import liberalization has ambiguous effects. Frictions implied by resource misallocation can either amplify, dampen or reverse the gains from trade. We quantify the size of the productivity gains or losses in our model simulations.
We then perform an empirical investigation of the effects of trade shocks on sector-level productivity, based on unique new data on 14 European countries and 20 industries, over the period 1998-2011. We empirically establish that exogenous shocks to export demand and import competition both generate large aggregate productivity gains. The estimates imply that a 20% rise in export demand would generate productivity gains of about 7% to 8%, while import competition increases productivity by about 1% to 10%.
Export expansion increases the average firm productivity (in particular via tougher firm selection) and shifts activity towards more productive incumbent firms (reallocation channel). Import competition also increases average firm productivity but the efficiency of allocation declines. This result is consistent with model predictions: rigid labour markets reduce the capacity of firms to respond to a more competitive environment via competitiveness gains, while firm-level frictions (misallocation) distort the optimal allocation across firms. Finally, we show that the efficiency of institutions in factor and product markets modifies the gains from trade. Exports tend to support sector-level productivity growth in the presence of market rigidities. However, market rigidities can lower the productivity impact of import competition, for instance by helping low productivity firms to survive