How to support private lending to firms in recessions is a major open question. This paper uses an unexpected change in the collateral framework of the European Central Bank that reduced the cost of funding loans to a subset of firms in France in 2012, to examine how bank adjust their corporate lending portfolio in a downturn. It provides causal evidence that targeted unconventional monetary policy can be an effective lever to increase private credit and reduce contagion of financial distress. The effect is strongly driven by firms with only a single bank relationship, especially less risky borrowers with information intensive banking relationships. 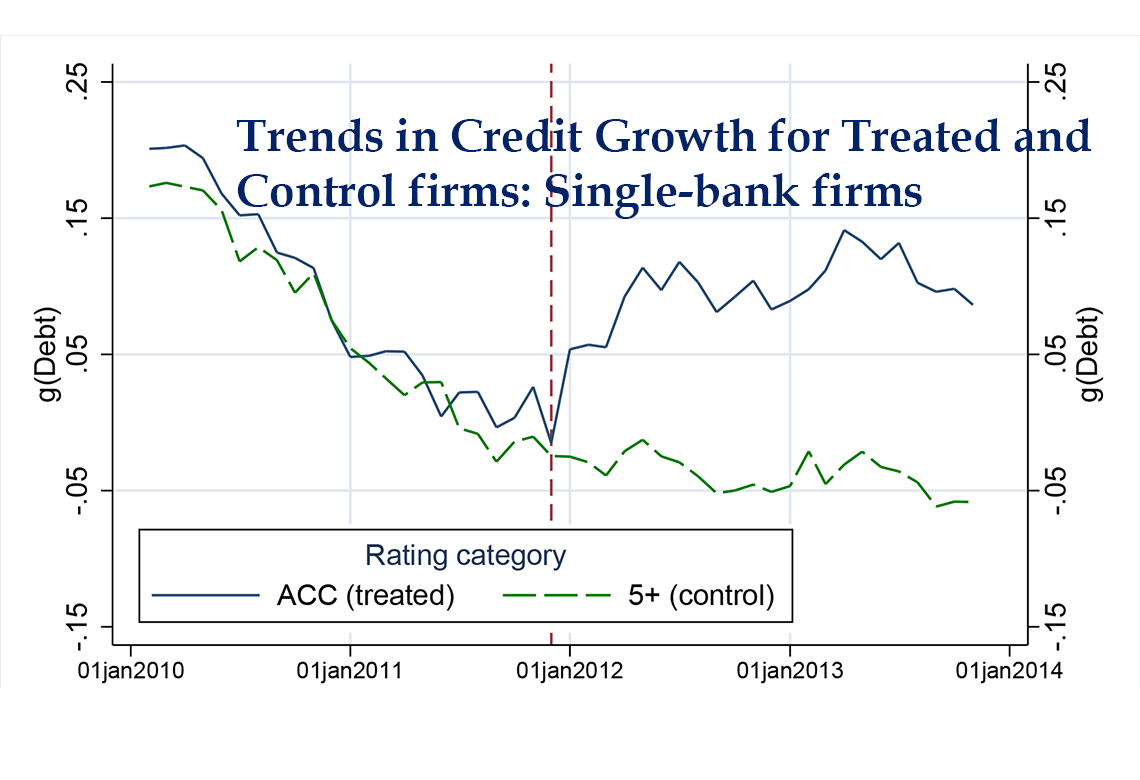 Supporting private lending to firms in times of economy-wide stress has been among the many policy goals of the Unconventional Monetary Policies (UMP) deployed since 2008, but the effectiveness and channels of such policies on lending to Small and Medium Size Enterprises (SMEs) in particular, and how bank relationships mediate this lending, are crucial questions that remain unanswered.

This paper exploits a unique natural experiment – an unexpected drop in the cost faced by banks of funding loans to a subset of their clients – to uncover how banks adjust their firm lending portfolios, which firms are most affected by bank belt-tightening in crises, and how lending relationships serve to transmit (positive) bank shocks.

The shock we examine is the introduction of the Additional Credit Claims (ACC) framework, as part of a package of unconventional monetary policy from the European Central Bank (ECB) and the Banque de France during the European Sovereign Debt crisis in late 2011. The ACC policy consists in a major expansion in the availability of collateralized long term lending to banks by the ECB - the vLTROs - together with a reduction of one notch in the minimum borrower credit rating required for a bank loan to be eligible as central bank collateral. Thus the ACC materially reduced the cost faced by banks of funding loans to a subset of newly eligible firms and created clear “treatment” and “control” groups for a difference in differences research design: firms in the credit ratings on either side of the new eligibility threshold.

Figure 1 illustrates the average growth rate in debt around the announcement of the LTRO-ACC reform for treated and control firms with a single bank relationship.

Treated and control groups are closely comparable and have very clear common trends in ex-ante credit growth, and treated SMEs experience a substantially higher growth in their amount of bank credit in the year following the shock (+ 8%).  We also find evidence that this effect is causally associated with a corresponding drop in the likelihood of payment defaults to suppliers and credit rating downgrades.

While the influential literature on shocks to bank liquidity largely excludes firms with only one bank relationship from their sample for econometric reasons, our empirical design allows us to examine the effects of a change in the cost of lending for all French SMEs in the affected credit rating categories, within bank loan portfolios. One of our central results is precisely that only single-bank firms receive substantial additional credit as a result of the policy. Moreover, within single-bank firms, the effect is driven by those with stronger lending relationships, provided they do not have weak observable characteristics, such as high leverage or low levels of tangible assets. These findings are consistent with the Bolton et al. (2016) model of banking relationships, in which the key benefit of relationships is that they ensure continued lending during crisis periods, but only for high quality firms.

Finally we also provide suggestive evidence that over 2011, in a period of stress for the financial system (the peak of the Eurozone Sovereign Debt Crisis), single-bank firms were substantially more credit constrained than firms with multiple bank relationships. If single-bank firms are indeed more credit constrained than multi-bank firms in bad times, then policies to induce bank lending to firms may be more effective if oriented towards them, especially given the potentially contagion-reducing effects (via reduced defaults on suppliers) reported here.