Rue de la Banque no. 58: What risk sharing and macroeconomic policy instruments in the Economic and Monetary Union?

The slowness and setbacks of the euro area financial integration process prevent it from playing a stabilising role, or even contributing to economic convergence. The priority is therefore to accelerate the emergence of a financing union, via pan-European banking groups, and a genuine capital markets union that removes the obstacles to the cross border allocation of savings within the euro area. The complementarity between private and public risk-sharing in a monetary union also leads to the recommendation that current surveillance and coordination mechanisms be strengthened, by creating new stabilisation instruments, under the aegis of a genuine macroeconomic authority for the euro area.
By Pierre JAILLET and Édouard VIDON 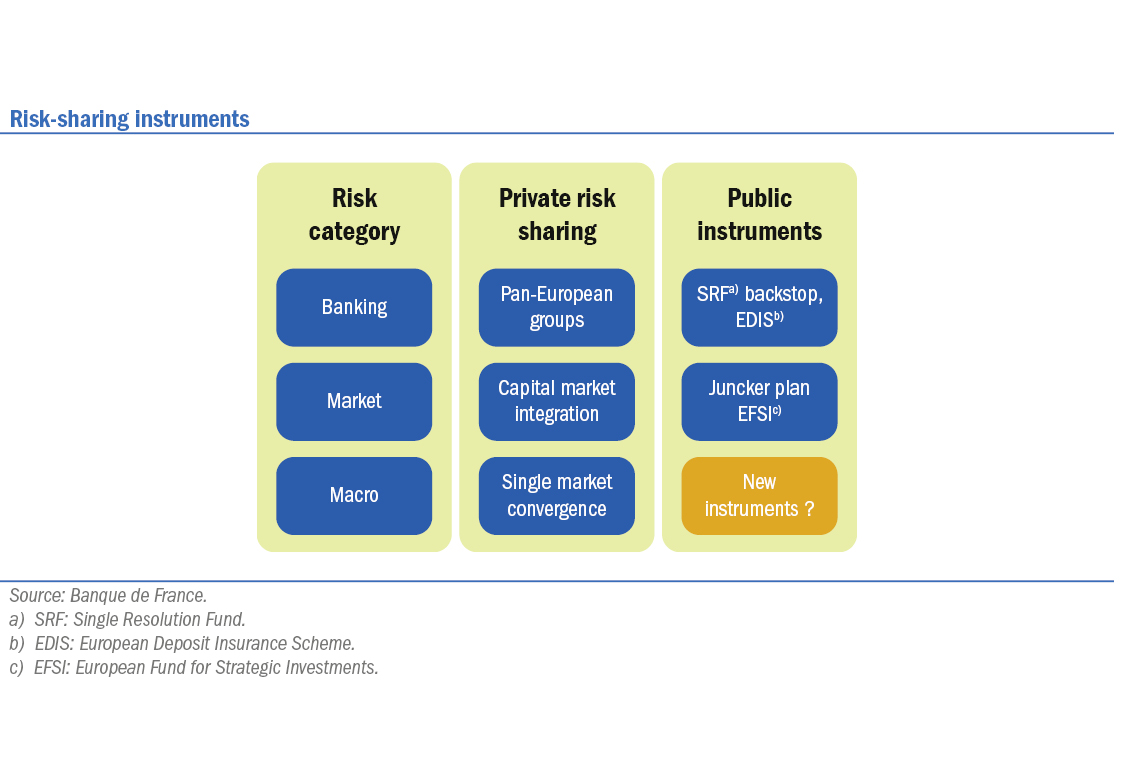 In the twentieth year of the single currency and more than five years after the peak of the crisis, there is a broadly shared assessment that the economic component of the euro area is too weak. Reform proposals, however, reveal a bipolarisation. Some give priority to the reduction of private and public risks by cleaning up bank balance sheets and strengthening fiscal discipline as a precondition for pooling those risks. Others favour the implementation of European risk-sharing instruments, regarding these as essential for the smooth functioning – and even future existence – of the euro area. This bipolarisation has resulted in inaction. Recent attempts by the European Commission, and by a group of French and German economists (Benassy‑Quere et al., 2018), to find a way out of this deadlock are welcome, but focusing too much on public risk-sharing would be misleading.

In this Rue de la Banque, we propose to reverse the order of priorities, on the basis of two observations: first, the complementarity between private and public risks in a monetary union; and second, the slow process of financial integration which has even reversed since the crisis. It cannot therefore play a stabilising role in the euro area, nor even contribute to structural convergence. As part of the preparatory work for the Economic and Monetary Union (EMU), the Emerson Report (European Commission, 1990) described perfectly how the single currency was an indispensable complement to a single market nearing completion. The paradox is that today the single currency is a reality, but is circulating in a fragmented economic and financial area (Buti et al., 2016).