Working Paper Series no. 650: Why are inflation forecasts sticky? Theory and application to France and Germany

This paper proposes a theoretical model of forecasts formation which implies that in presence of information observation and forecasts communication costs, rational professional forecasters might find it optimal not to revise their forecasts continuously, or at any time. The threshold time- and state-dependence of the observation reviews and forecasts revisions implied by this model are then tested using inflation forecast updates of professional forecasters from recent Consensus Economics panel data for France and Germany. Our empirical results support the presence of both kinds of dependence, as well as their threshold-type shape. They also imply an upper bound of the optimal time between two information observations of about six months and the co-existence of both types of costs, the observation cost being about 1.5 times larger than the communication cost. 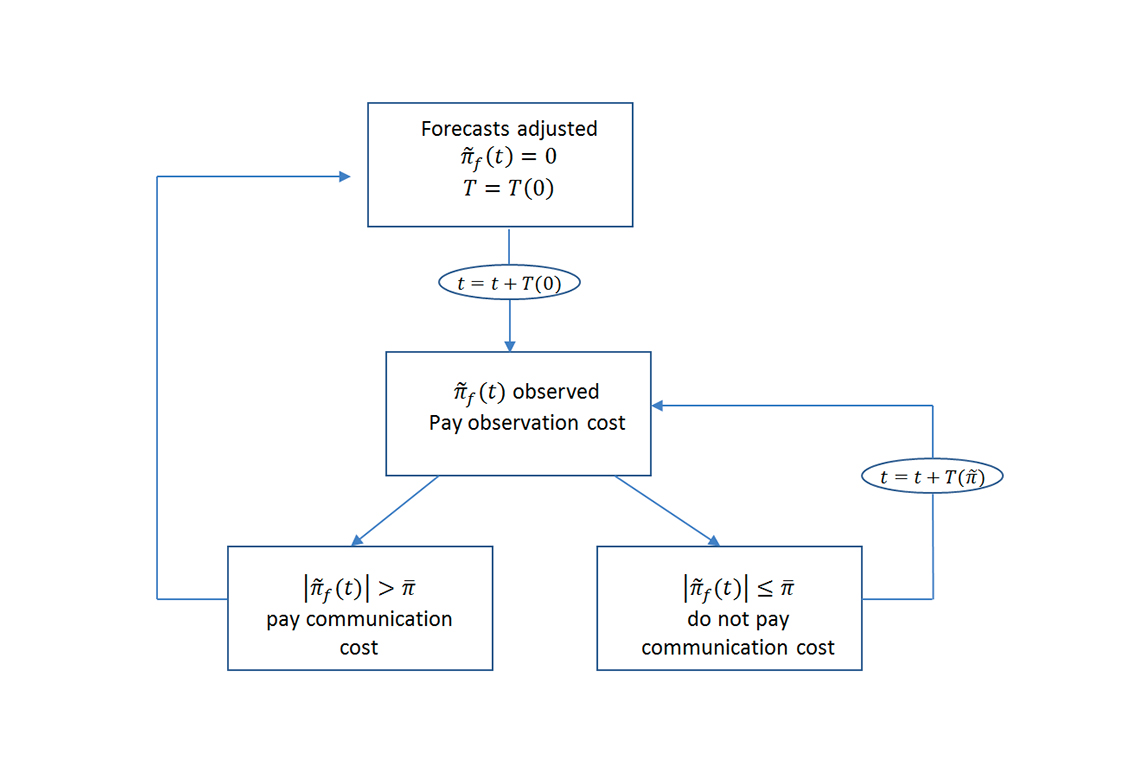 Recent empirical evidence from forecast surveys data point to a “forecast stickiness”, inconsistent with the full information rational expectation hypothesis in a frictionless setup. To explain these findings, literature has put forward information rigidities models, such as sticky information à la Mankiw and Reis [2002] or noisy information à la Woodford [2002] and Sims [2003], as an explanation. Hence forecast stickiness is observed because access to information is imperfect and/or costly. However, these models usually fail to reproduce the degree of stickiness observed in the data. Moreover, they imply decision rules that are time-dependent only, hence contradicting empirical findings that they are also state-dependent.
In this paper, we put forward an additional ingredient to explain the forecast stickiness observed in the data: communication costs. Hence, a forecaster can update her information set (and pay an observation cost), process an update of her forecast, and decide not to communicate it (publicly or to the survey) because this communication is costly for her. This “communication cost” do cover all the costs associated with the official release of the revised forecast, such as public communication, writing reports, interview with media etc. This cost also includes the loss of the forecaster’s credibility from its institution’s customer that too frequent forecast revisions would cause.

In this paper we first develop a theoretical model of forecasts formation which incorporates separate observation and communication costs. As a result, forecast update decision rule is found to be both time- and state-dependent. The main model's implications for forecasts update process are the following. First, the time between two observations is a non-linear function of the gap between the current forecast and the one which would prevail using updated information set (hereafter called forecast gap): for small such gaps, the closer to a threshold value, the sooner the next observation. By contrast, small enough gaps define an inaction band from the forecasters where it is not worth it either reviewing observation or revising the forecast. Second, the time between two observations reaches a maximum when the gap is closed. This maximum time increases in both observation and communication costs. Third, the forecast update is triggered immediately after observation if the forecast gap upon observation is large enough in absolute value. If so, the gap is closed by the update. The time- and state-dependence of the observations and forecasts revisions implied by this model are then tested using inflation forecast updates of professional forecasters from recent Consensus Economics panel data for France and Germany. To this end, conditional probabilities as estimated from binary choice models are used.

Our findings clearly support time-dependent updates, a result which is compatible with the observation cost assumption. Indeed, they point to a strong positive effect when the last update has occurred three and/or six months ago, even after controlling for the institutions periodic forecast framework (quarterly or bi-annual). This gives an upper bound estimate of the optimal time between two observations of six months. Evidence of updates state-dependence is also provided. Actually, a strong positive and significant effect is found on updates when the forecast gap is larger than the estimated threshold, as proxied by the last known monthly inflation rate, weighted by its mechanical contribution to the yearly inflation rate forecast. Finally, our results confirm the co-existence of both types of costs with a forecast communication cost smaller than the observation cost.

publication
Working Paper Series no. 650: Why are inflation forecasts sticky? Theory and application to France and Germany
Download (EN)