This paper reviews the different channels of transmission of prudential policy highlighted in the literature and provides a quantitative assessment of the impact of Basel III reforms using “off-the-shelf” DSGE models. It shows that the effects of regulation are positive on GDP whenever the costs and benefits of regulation are both introduced. However, this result may be associated with a temporary economic slowdown in the transition to Basel III, which can be accommodated by monetary policy. The assessment of liquidity requirements is still an area for research, as most models focus on costs, rather than on benefits, in particular in terms of lower contagion risk. 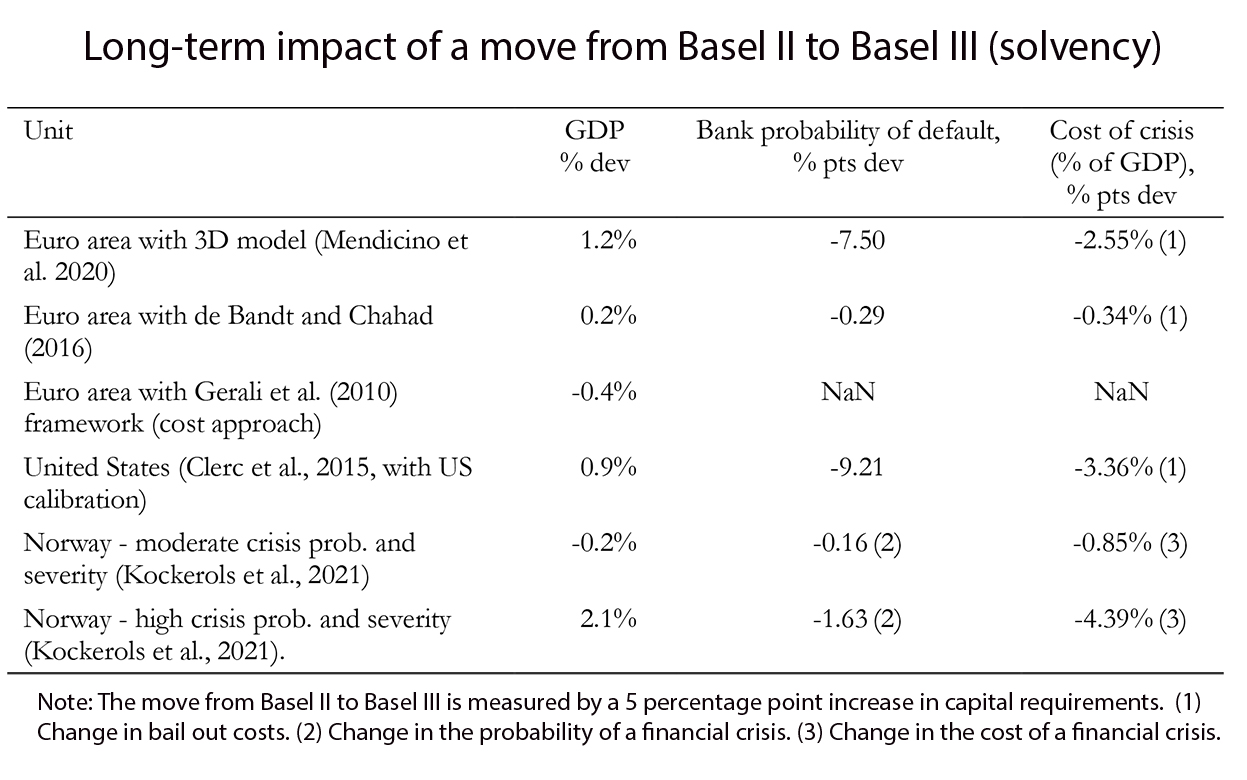 In the aftermath of the 2008 Global Financial Crisis, the Basel Committee on Banking Supervision (BCBS) developed a set of reforms – the Basel III Accords – aimed at improving regulation, supervision, and risk management within the banking sector. By requiring banks to keep a higher level of reserve capital on hand, and to maintain adequate liquidity ratios, Basel III addresses a number of shortcomings in the pre-crisis regulatory framework.

To quantitatively assess the impact of Basel III reforms from a macroeconomic perspective, structural quantitative macroeconomic models have been developed that capture the transmission mechanisms of prudential policies. Central banks and supervisory agencies have been at the forefront in the development and application of such models.

The first part of the paper reviews the different channels of transmission of financial shocks (including regulatory changes) highlighted in the literature in the last 15 years. It distinguishes between, on the one hand, standard quantitative Dynamic Stochastic General Equilibrium (DSGE) models routinely used by central banks and, on the other hand, alternative models that investigate potential additional channels, and new issues. The conclusion of this journey into the world of macroeconomic models is that a very large number of new models have been made available since BCBS (2010), but standard models still concentrate mostly on capital requirements and more rarely on liquidity. Alternative models consider other policies (unconventional monetary policies, etc) as well as new, highly relevant challenges like interactions with the shadow banking system. However, the latter models are not yet sufficiently operational to allow an empirical assessment of the impact of the regulatory changes.

The second part of the paper provides a simulation of regulatory scenarios replicating the implementation of Basel III reforms, using “off-the-shelf” macro-finance models at the European Central Bank, the Board of Governors of the Federal Reserve System, the Banque de France and the Norges Bank. These simulations provide novel estimates of the impacts of Basel III. The variety of models and jurisdictions on which the macroeconomic impact of Basel III is assessed ensures the robustness of the findings. Some models do not measure the benefits, so that the latter may be inferred by difference with the output of the models that assess both costs and benefits. In addition, the models are used to provide a first assessment of the resilience of the post-Basel III banking system to very large shocks replicating the current Covid-19 environment.

In a nutshell, whenever the costs and benefits of regulation are introduced in the model, the effects of Basel III are positive on GDP (this is the case for the 3D model applied to the euro area and the United States, as well as the model by de Bandt and Chahad (2016) with run probability). This holds both for the United States and euro area economies. The positive effect of Basel III on GDP may however be associated in the transition to Basel III by a temporary slowdown accommodated by monetary policy. In additional exercises, we assess the costs related to the transition from Basel II to Basel III. First, the Central Bank of Norway’s NEMO model concludes that the net benefits of Basel III depend on the magnitude of the crisis probability and severity. In the case of moderate crisis probability and severity, Basel III has a small negative effect on GDP although it reduces both the crisis probability and the severity. However, when both the probability and the severity nearly double, Basel III has positive effects on GDP as its net benefits become substantial. Second, using the Gerali et al. (2010) framework for the euro area, which only identifies the cost of implementation of the regulation, yields a negative effect on GDP, but this results is an obvious consequence of the absence of modelling of the benefits of regulation.

All in all, one needs to emphasise that the results of the models crucially depend on the assumptions regarding the magnitude and the sensitivity of the bank default probability or the financial crisis probability. This is consistent with BCBS (2010) and Birn et al. (2020). Expectations regarding the likely impact of the regulation also play a significant role in the positive assessment of the impact of Basel III regulations.

To conclude, while significant advances have been made for the modelling of solvency requirements, the assessment of liquidity requirements is still an area for research, as most models still concentrate on the costs of liquidity.