We explore the impact of wage adjustment on employment with a focus on the role of downward nominal wage rigidities. We use a harmonised survey dataset, which covers 25 European countries in the period 2010-2013. These data are particularly useful for this paper given the firm-level information on the change in economic conditions and collective pay agreements. Our findings confirm the presence of wage rigidities in Europe: first, collective pay agreements reduce the probability of downward wage adjustment; second, the rise in the probability of downward base wage responses following a decrease in demand is significantly smaller than the rise in the probability of an upward wage response associated with an increase in demand. Estimation results point to a negative effect of downward wage rigidities on employment at the firm level. 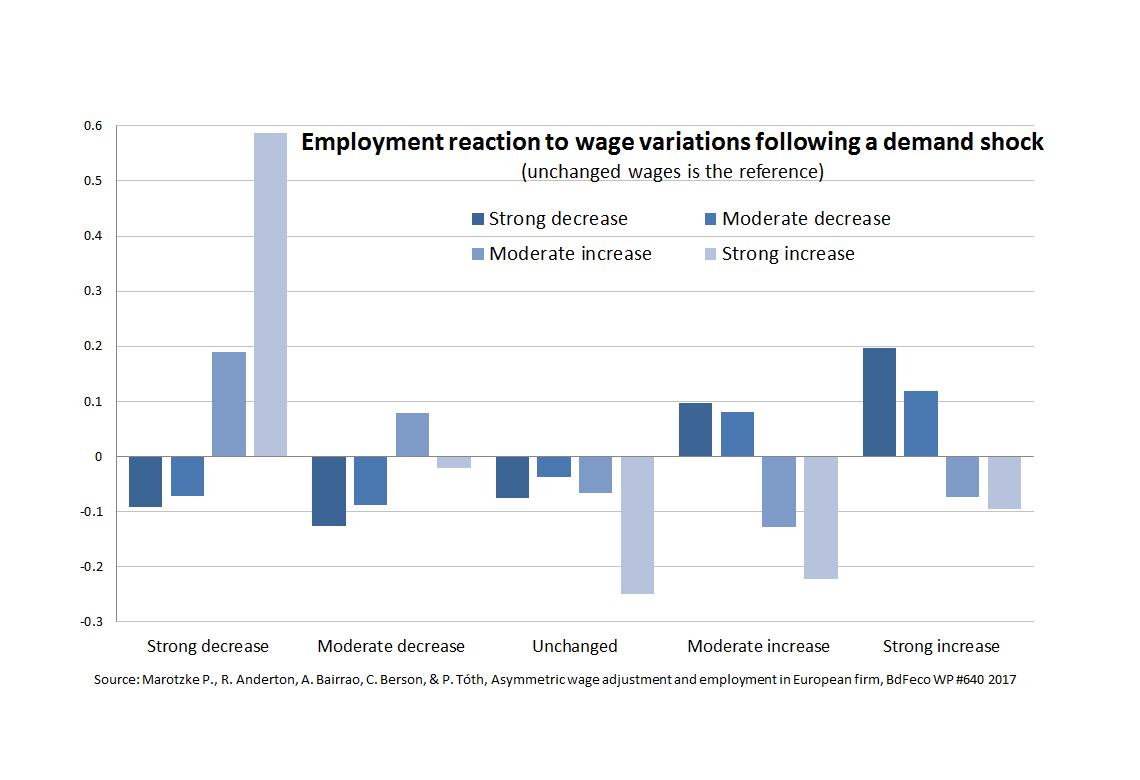 This paper empirically explores the behaviour of wages and the impact of wage adjustment on employment in Europe during the years 2010 to 2013, with a focus on the role of nominal rigidities. The analysis is based on new harmonised firm-level survey data from the Wage Dynamics Network – a European System of Central Banks research network. One major advantage of the WDN data when exploring wage and employment adjustments is firm-level information on the change in economic conditions during the 2010-to-2013 period.

Furthermore, a strong and moderate fall in demand significantly increases the probability that base wages will remain unchanged. This is further evidence of downward nominal wage rigidity, as the distribution of changes in wages starts to bunch around unchanged base wages when demand falls. By contrast, when there is a moderate or strong increase in demand, there is a lower probability of base wages staying unchanged. We further explore the influence of wage reactions to a fall in demand on employment. To take the endogeneity of wages in the employment equation into account, we use the share of workers covered by a collective pay agreement as an instrumental variable for wage adjustments. Estimation results point to a negative effect of downward wage rigidities on employment at the firm level, when these rigidities are induced by collective pay agreements. We find that wage adjustments have a significant effect on employment within the firm. The probability that employment falls or remains unchanged is significantly lower when wages decrease compared to the reference category of unchanged base wages. If wages increase, the probability of a decrease in employment is higher than under unchanged wages. Wages and employment depend on similar economic circumstances. A decrease in the availability of supplies from the firm’s usual suppliers, in the customers’ ability to pay and meet contractual terms, or in the access to external financing affects wages and employment negatively. Moreover, firms that use flexible wage components are less likely to reduce wages and employment. This suggests that some firms tend to use bonuses as a buffer to avoid base wage cuts or layoffs. We find evidence that employment protection increases workers’ bargaining power as the probability of a base wage rise is higher in firms that report firing costs as relevant obstacles to hiring.