We measure the degree of financial integration among the top five financial centers of mid-19th-century Europe by applying threshold-regression analysis to a new database of exchange rates and bullion prices. We find that, instead of London, Hamburg, Frankfurt or Amsterdam, it was Paris that played the role of hub of European foreign exchange markets. We also document a high level of financial integration before the gold standard period, with estimated transaction costs far lower than historically-observed “gold” and “silver points” (i.e., the costs to bullion arbitrage). We review the assumptions of the classical gold-point arbitrage model and conclude that TAR-computed thresholds cannot be interpreted as transaction costs in the bullion trade. High integration may be explained not by low transaction costs in bilateral bullion arbitrage, but by the availability of multilateral financial arbitrage techniques. 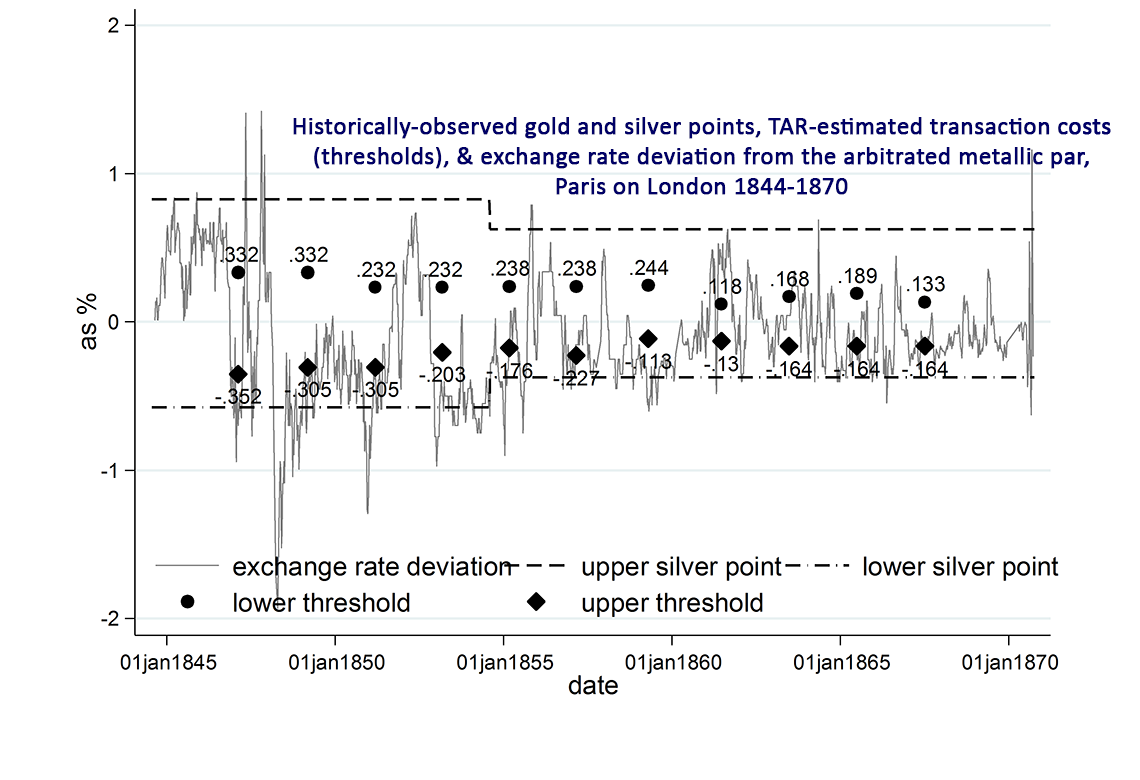 How deeply integrated were European financial markets before the advent of the international gold standard in the 1870s? We show a very high level of financial integration among the main European financial centers (Amsterdam, Frankfurt, Hamburg, London, and Paris) in the period from the Bank of England Act of 1844 to the French-Prussian War of 1870.

In order to measure financial integration, we focus on foreign exchange markets. Foreign exchange markets were organized similarly across Europe before 1870. They were based on a similar instrument (the bill of exchange) whose legal features were fairly homogenous across the Continent. Bills of exchange were denominated in different currencies; before 1870, European currencies were convertible into different precious metals. Amsterdam, Frankfurt, and Hamburg were on the silver standard, London was on the gold standard and Paris on the bimetallic standard. Moreover this era coincides with the consolidation of the European national states and their effort to foster national financial integration with the creation of central banks’ networks of branches.

We use threshold autoregressive (TAR) models to estimate the degree of integration of the markets for bills of exchanges. Technically, a bill payable at sight was a promise to receive upon presentation a given amount of local currency in a foreign place. The state-of-the-art literature on financial integration maintains that the thresholds estimated with TAR models can be interpreted as “gold” or “silver points” (i.e., the level of the exchange rate beyond which gold or silver would start to be imported or exported). Our paper questions this view both empirically and theoretically.

We document a very high level of integration, as illustrated by the example plotted on Figure 1. For some financial markets, those levels are comparable to the transaction costs found in today’s markets. This level of integration was achieved before the harmonization fostered by the advent of the international gold standard. We discuss the traditional interpretation of estimated thresholds, and show that their level is actually too small to be interpreted as representative of transaction costs to bullion arbitrage.

We also document that information technology innovations played some role in fostering market integration: there are non-negligible improvements in the level of integration between the 1840s and the 1860s, as showed by the declining average absolute deviation of direct spot exchange rates from basically all benchmarks throughout the period. Also, our findings do not support the view that actual gold and silver flows were an effective force on arbitrage between currencies.

The most active route for international adjustment consisted of arbitraging through Paris; in this particular ranking, London only came third after Amsterdam, while Hamburg supplied the less popular route. While this conclusion may appear in contrast with received wisdom (which traditionally considers London as the center of the international monetary system since the early 19th century), it is consistent with the information provided on the structure of the international payments network. Although London was very important, Paris provided international arbitrageurs with a performing infrastructure for implementing international transactions in bills of exchange, as it was the only place to have the maximum number of currencies quoted there, but also because of the maximum number of markets quoting the French franc. One might speculate that this had roots in the geographical position of France or in the peculiarities of its bimetallic standard. The identification of this cause is left for future research.