We use disaggregated data on car assembly and trade to estimate a model of multinational production. Our framework delineates four theory-based specifications under which all frictions relevant to multinational production can be structurally estimated. In addition to the trade costs and multinational production frictions emphasized in past work, we incorporate a third friction: regardless of production origin, it is more difficult to make sales in markets that are geographically separated from the brand’s headquarters. The estimation transparently recovers internally consistent estimates of each type of friction cost. With structural parameters in hand, we investigate the consequences of three trade integration experiments: TPP, TTIP, and Brexit. We show that each type of friction makes a qualitative and quantitative difference in the reallocation of production caused by economic integration. 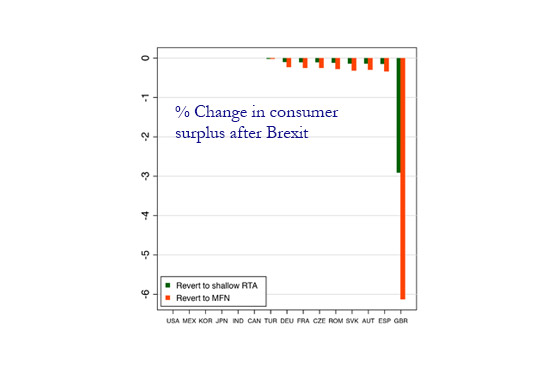 Evaluations of economic integration agreements increasingly focus on their implications for multinational firms. This is true for critics -- who voice suspicions that corporate interests drive the negotiations of recent mega-regional agreement such as TPP or TTIP -- as well as for proponents -- who see integration as facilitating beneficial transfers of technology.  One reason regional trade agreements (RTAs) matter for multinationals is that they enhance the relative appeal of peripheral members whom the RTA transforms into export platforms to serve the region's entire market.  A second reason why RTAs matter for multinationals is that modern RTAs involve deeper integration than just preferential tariff cuts.  As Larry Summers put it, ''What we call trade agreements are in fact agreements on the protection of investments and the achievement of regulatory harmonization and establishment of standards in areas such as intellectual property.''  Investment protections raise the benefits for firms based within the RTA of using other members as export platforms, even to external markets. On the other hand, regulatory harmonization allows multinationals to use a single design for an entire region.  The increased focus on footloose producers and the complex implications of deeper integration highlight the need for quantitative models that can handle multinational production responses to integration agreements.

This paper estimates a model of multinational production (MP) that incorporates this range of responses to different forms of integration in a unified quantitative framework.  Our original model is the first to consider two extensive margins (entry and sourcing of each variety for each market) and two intensive margins (variety-level and brand-level sales), which yield estimable equations that are directly amenable to empirical implementation.

The primary contribution of this paper is to use those estimable equations in order to estimate parameters of 3 different types of friction relevant to the MP model based on micro data.  We utilize data tracking production at the level of brands (Acura, BMW, Chevrolet) and models (RDX, X5, Corvette) provided by an automotive industry consultant.  We organize the estimating framework around the brand-level decisions over which countries to offer each model and which countries to source assembly from for each model-market pair.

We use the estimated model to simulate different counterfactuals.  Those provide policy-relevant outcomes for production and consumer surplus for four controversial changes in the structure of regional agreements.  For example, we predict a complete Brexit would cut British car output by 4% and car buyers' surplus by 6%. The simulations also exhibit the rich patterns of adjustment that characterize the double CES framework of MP.  One illustration comes from comparing the boosts Korean and Japanese production receive from a potential NAFTA dissolution.  As the costs of serving the Canadian market from the US rise, Toyota's probability of sourcing from the US falls by 5.3 percentage points (from 10.9% to 5.6%).  Toyota's Japanese plants are the biggest beneficiaries, gaining 2.6 points, but its Canadian plants grab 1.6%. Hyundai's US plant also sees a sharp fall in its sourcing probability (8 points).  However, as Hyundai lacks a plant in Canada, it reallocates nearly the entire probability (6.8 points) to its Korean plants.

A second illustration comes from the prediction that a US-Mexico tariff war (a scenario we refer to as Trumpit, since it was proposed by presidential candidate Donald Trump) would lead to a 41% collapse in Mexican production but have a negligible impact on US production.  These different outcomes arise in part because of a natural asymmetry in the MP framework:  US brands are assembled in Mexico but there are no Mexican brands assembled in the US. Given the importance our estimates attribute to parts imported from headquarters, Mexican assembly costs rise when the US and Mexico impose tariffs on each other, while US assembly costs are unaffected.  These two examples drive home the point that a full understanding of national outcomes from policy changes requires consideration of the geographic structure of MNCs' production networks.