Using panel data covering 126 low- and middle-income countries over 1960-2017, we find that sustained positive temperature deviations from their historical norms have a non-linear negative effect on economic growth and growth per capita. A sustained 1°C temperature increase lowers real GDP per capita annual growth by 0.74–1.52 percentage points, irrespective of levels of development. We also find that temperature rise affects the households’ intertemporal trade-off between consumption and investment, since the share of private consumption in total value-added increases while the share of investment declines. A sectoral decomposition shows that the share of industrial value-added also declines. While the share of agricultural value-added increases, agricultural output and productivity declines. Taken together, our results suggest that global warming will reinforce development traps, hindering further adaptation to climate change, particularly in the countries with the lowest levels of income given their lower resilience and higher socioeconomic vulnerability. 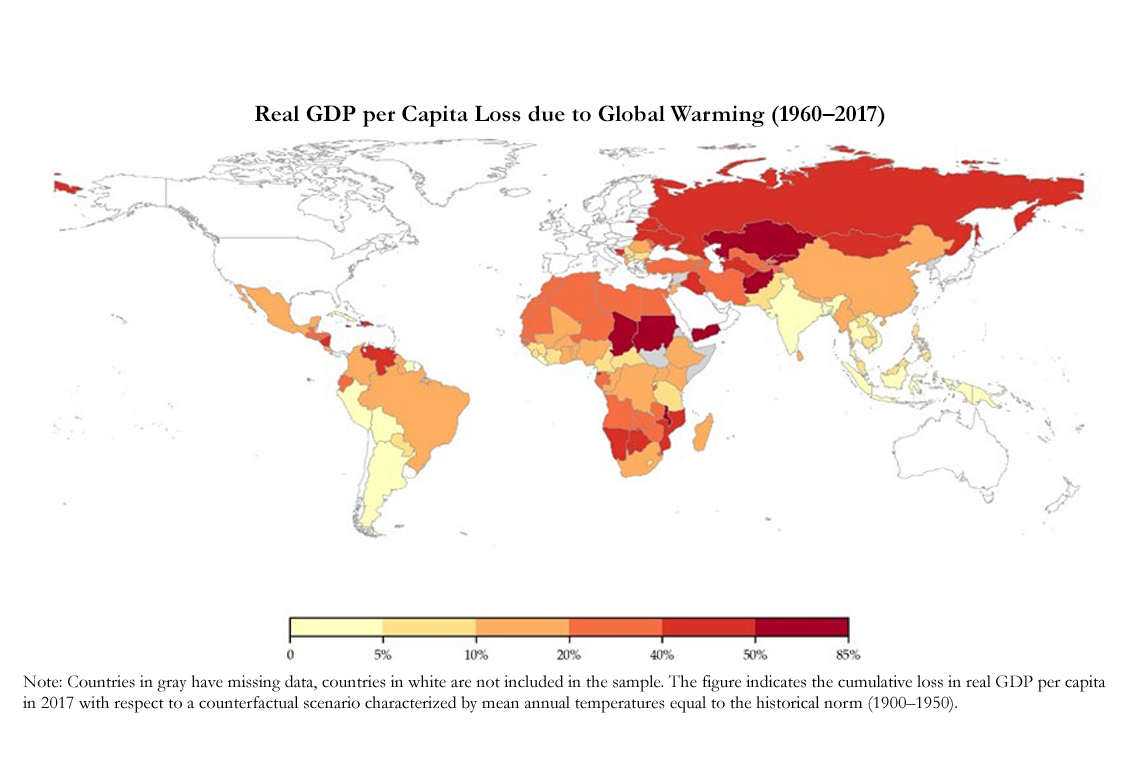 Climate change is one of the global challenges of our time. Its growing and global environmental and socio-economic impacts weigh significantly on the current international agenda and on national policymaking. Its impact may however vary significantly according to the level of economic development, with low- and middle-income countries bearing a disproportionate cost as they are affected by more rapid pace of climate change, including temperature rise, even though they have contributed only marginally to global carbon flows and stocks. They must therefore make substantial adaptation efforts, while contributing to mitigation, which may imply different priorities between mitigation and adaptation policies, in particular using policy toolkits that favor rapid economic growth. This is to ensure economic convergence with developed countries and help reaching Sustainable Development Goals. These policy dilemmas and the risk of collective action failures arising from differences in development levels were recognized by the 2015 Paris Climate Agreement, which includes annual transfer commitments from advanced economies to developing countries amounting to 100 billion US dollars.

The recent and rapidly growing literature that links temperatures and precipitations to output growth already points to a negative effect on economic growth in the vast majority of both developed and developing countries (Dell et al., 2012, 2014, Acevedo et al., 2020, Kahn et al., 2019), with possible accelerating and cumulative non-linear effects (Burke et al., 2015b). Because of the distinct characteristics of developing countries (higher demographic growth, lower levels of development and resilience, lower institutional quality), the impact of climate on economic growth (or development, proxied by GDP per capita) may however differ from that in high-income countries both in terms of scope and transmission mechanisms.

Using panel data of 126 low- and middle-income countries over 1960-2017, we find that sustained positive temperature deviations from their historical norms have a negative effect on economic growth and growth per capita, and that this effect is non-linear and accelerates as temperatures rise. A sustained 1°C temperature increase lowers real GDP per capita annual growth by 0.74 to 1.52 percentage points, irrespective of levels of development.

We also find that global warming increases the relative share of private consumption at the expense of investment, possibly reflecting more binding subsistence requirements in a context of declining output and potential output, leading to increased development gaps. The share of the agricultural value-added in GDP increases at the expense of industrial value-added, despite a decline in agricultural output growth, leading to a potential reinforcement of the “food problem”: lower income countries need to dedicate a higher share of their resources to food production in order to meet their subsistence requirements. Both the sectoral and the demand decomposition of GDP indicate a shift towards short-term gains at the cost of economic diversification and future prosperity.

Global warming constitutes a development trap that threatens the gains in living standards, particularly since the beginning of the 21st Century. It requires even greater adaptation efforts in developing countries, particularly in the countries with the lowest levels of income given their lower resilience and higher socioeconomic vulnerability.