Using unique daily data on payment defaults to suppliers in France, we show how the trade credit channel amplified the Covid-19 shock, during the first months of the pandemic. It dramatically increased short-term liquidity needs in the most impacted downstream sectors: a one standard deviation increase in net trade credit position leads to a rise in the probability of default of up to a third. This effect is short-term and cyclical and is concentrated on financially constrained firms. We argue that taking into account the trade credit channel is critical to properly quantify liquidity shortfalls in crisis times. 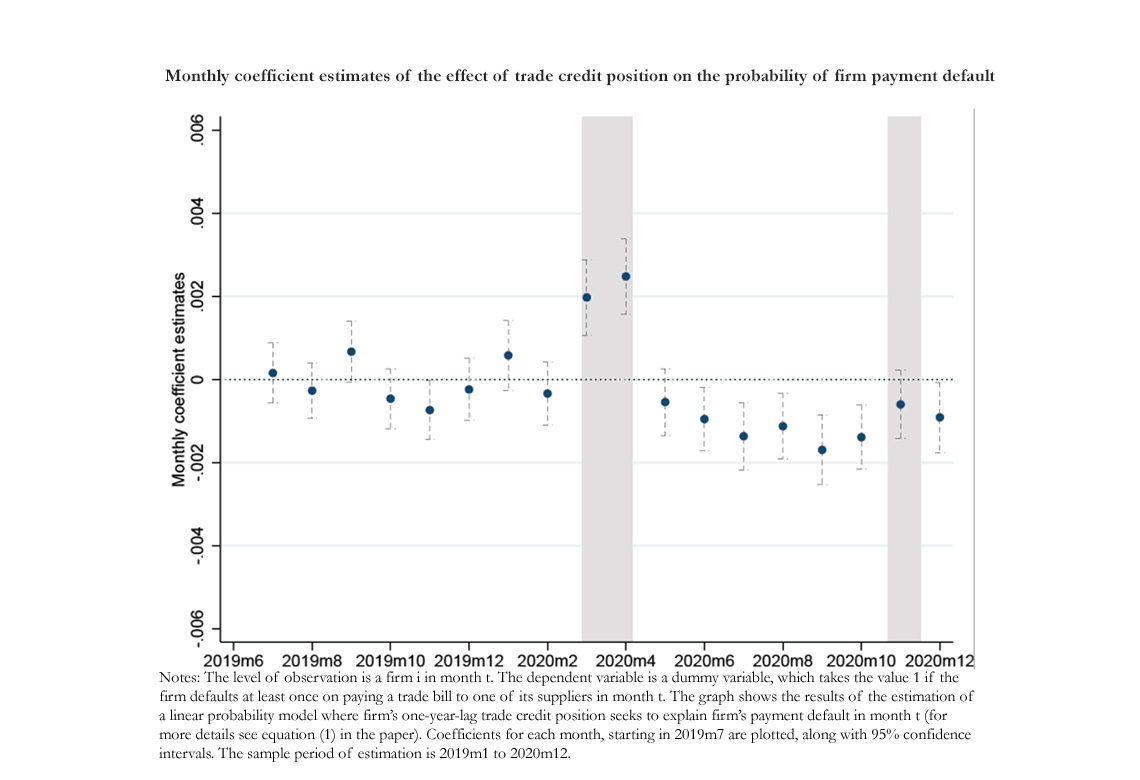 Short-term funding of non-financial firms essentially comes from suppliers. In 2019, trade payables of French firms exceeded EUR 520 billion, more than seven times higher than short-term bank funding. Such numbers highlight how critical the reliance on trade credit is for firms’ liquidity in France, as in other countries. Despite its economic significance, trade credit has surprisingly received little attention in the growing volume of literature analysing the impact of the Covid-19 crisis on the economy. This paper fills the gap by shedding light on a trade credit channel of the Covid-19 crisis, which goes against the traditional role of trade credit as a countercyclical way of funding.

While trade credit has been shown to provide an alternative source of financing, as a substitute for bank finance in times of banking crises, we show how relying on trade credit finance (i.e., being a net trade credit borrower) turned into a source of liquidity stress during the early stage of the Covid crisis.

Firstly, we show that the existing net trade credit position of a firm amplifies the liquidity stress caused by the lockdown and significantly increases the probability that the firm defaults on its suppliers. This impact on payment default is stronger in, but not limited to, downstream sectors like retail trade, with structurally positive net trade credit position. This effect is short-term and cyclical. After reaching a peak in April, it fades out when the activity resumes after the lockdown, and even reverses in June, albeit to a lesser extent as the recovery is gradual. Secondly, we find that financially weaker firms are more exposed to defaults induced by the trade credit channel: smaller, riskier, capital constrained and less profitable firms that are net trade credit borrowers, default significantly more than financially stronger firms. Thirdly, we document that firms can offset the effect on payment defaults by hedging liquidity risk. As expected, firms with high cash buffers are able to counterbalance the liquidity stress induced by the trade credit channel during the lockdown. We also find evidence consistent with a default reduction effect of using accounts receivable financing, but only for the largest firms.

Our results enable readers to better understand one of the critical channels affecting the transmission of the shock along the supply chain. They shed light on the cyclical and short-term nature of trade credit. The inverted U-shape effect on default to suppliers we document throughout the paper is somewhat simple but critical to properly assess the intensity of the liquidity shock and to accurately quantify potential liquidity shortfalls at a given point in time. The liquidity "path" of the firm, i.e., this bounce-back effect, shall not be neglected to calibrate liquidity bridge schemes aiming at alleviating funding stress in crisis times and to avoid contagion along the supply chain.