The Covid 19 crisis has led to greater capital outflows from emerging countries than those observed in 2008. At the national level, in response to this crisis, countries have implemented effective and unprecedented counter cyclical policies: fiscal, macroprudential and monetary, often with unconventional asset purchase policies for the first time. There have been numerous but limited foreign exchange interventions, with many countries choosing to float their currencies, and capital controls have been rare. At the global level, International Monetary Fund (IMF) loans were the main instruments used. These responses have resulted in a selective return of capital flows to some emerging countries. Nevertheless, additional support is needed to restore sustainable growth. The IMF’s general allocation of Special Drawing Rights at the end of August 2021 could be an opportunity to implement more durable measures through their reallocation. 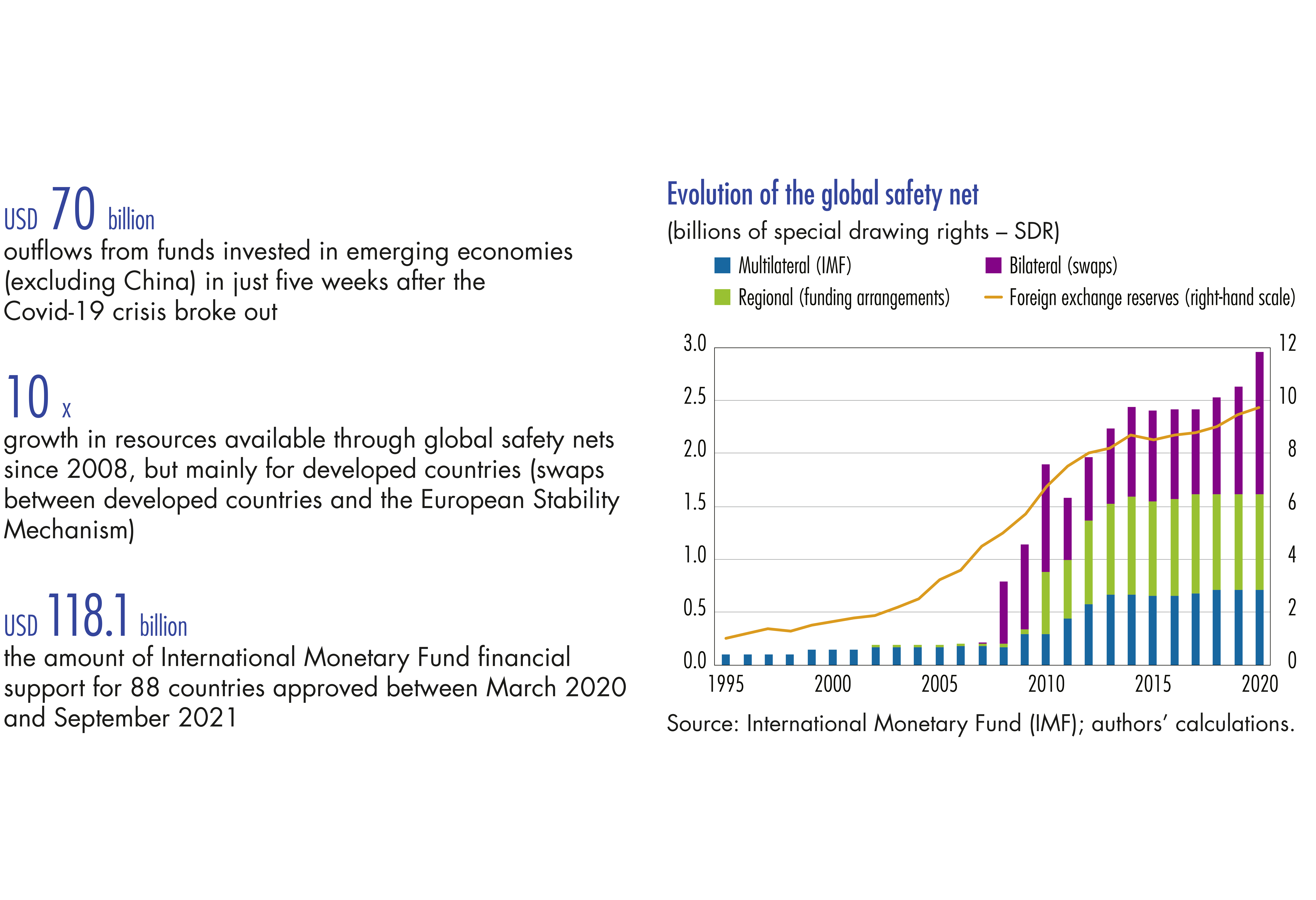 The global pandemic resulted in an exceptional episode of capital flows, with capital outflows from emerging countries higher than in 2008. These massive outflows occurred even though many emerging countries have strengthened their fundamentals since 2008. A rapid return of capital inflows, albeit with differences across countries, followed this episode, but did not offset the consequences of this financial shock.

In response to this financial shock, safety nets were deployed at all levels: national, regional, bilateral and multilateral. At the national level, countries reacted by implementing fiscal and monetary policies, including unprecedented unconventional asset purchase programmes, foreign exchange interventions and temporary macroprudential easing. Unlike in the past, there were few capital controls. Foreign exchange swaps between central banks, mainly conducted by the Federal Reserve (Fed) and the Eurosystem, were used to ensure the provision of foreign currency liquidity, particularly in dollars, in the counterparty countries. However, emerging countries only benefited indirectly (or marginally) from these arrangements. Repo facilities, set up by the Fed and to a lesser extent the Eurosystem, allowed some central banks not covered by the swap network to access foreign currency liquidity. Regional Financial Arrangements were hardly used, but multilateral development banks largely increased their funding arrangements. Lastly, the International Monetary Fund (IMF) has deployed all its instruments, with an exceptional number of loans granted (USD 118.1 billion, for 88 countries as at 7 September 2021). These loans were mainly in the form of rapid credit facilities (especially for developing countries), but also precautionary instruments (for some emerging countries).

All these measures prevented a general crash or default in many emerging countries. However, the financial shock was substantial (USD 70 billion in capital outflows during the first five weeks of the crisis for emerging countries). It also contributed, according to World Bank estimates, to a 77 million increase in the number of people below the extreme poverty threshold from 2019 to 2020, mainly in poor and emerging countries.

Significant changes in capital flows over the last 20 years

Gross capital flows are a product of globalization and increased sharply until the great financial crisis of 2008. In 2007, they reached a peak of 20% of world GDP for inflows, compared to less than 5% in the first half of the 1990s. …