French GDP growth should increase markedly in 2017 to 1.8% (annual average, working-day adjusted) after 1.1% in 2016. It is then expected to remain at a broadly similar rate (1.7% in 2018, 1.8% in 2019 and 1.6% in 2020). Domestic demand, especially private investment, while remaining buoyant, is projected to slow slightly over the 2018 20 period. However, foreign trade should no longer weigh on GDP growth, after making an exceptionally negative contribution for several consecutive years. Unemployment is expected to decline over the projection horizon. The output gap, estimated by the Banque de France, should close in 2019. If the reforms being undertaken lead to an increase in potential growth over the projection horizon, growth could be stronger than currently projected. This would also lead to an improvement in public finances, which remain fragile: under the current scenario, public debt is only expected to stabilise in 2020. Inflation strengthened substantially in 2017 to 1.2% (annual average) from 0.3% in 2016 due to the upturn in energy prices. It is then expected to fluctuate before accelerating more sharply in 2020 to an annual average of 1.6%. Inflation excluding energy and food will be dampened by various specific factors, and should thus only rise very gradually until 2020, in line with falling unemployment. 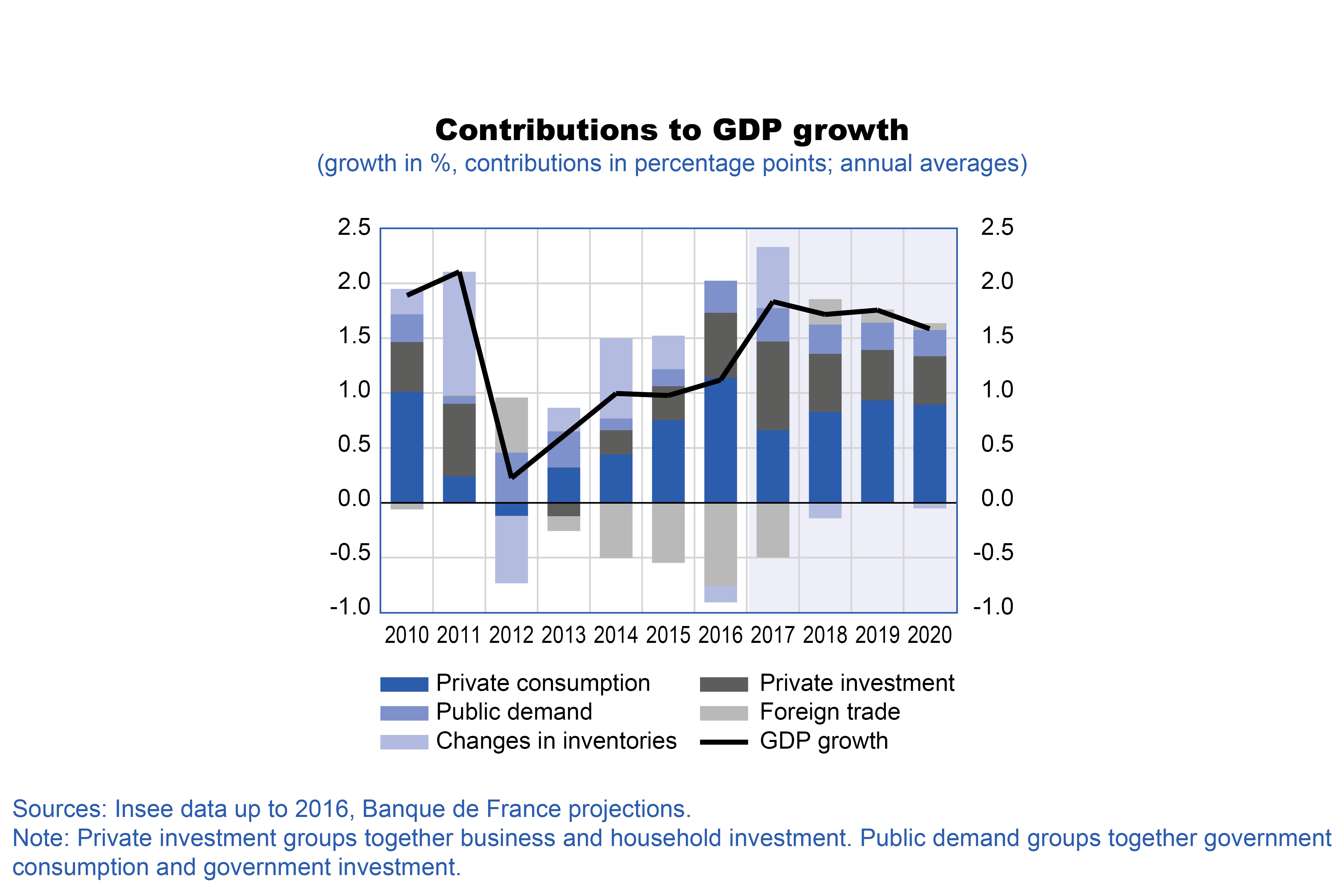 After three years of moderate growth (1.0% in 2014 and 2015, and 1.1% in 2016), French economic activity should accelerate in 2017, rising by 1.8% – the highest annual average growth rate since 2011. As in 2016, domestic demand is expected to continue to support growth, although its composition will be different, with more robust business and household investment and more moderate private consumption. Although exports should pick up again, driven by stronger growth in foreign demand for French goods and services (following the significant, though temporary, adverse impacts of certain exceptional events in 2016 and at the beginning of 2017), the annual average net contribution of foreign trade is expected to remain negative (see table), even though it has been neutral on a quarter-by-quarter basis since the second quarter. Lastly, the latest economic surveys point to a significant upturn in activity at end-2017, but also show signs of increasing supply constraints.

In the 2018-20 period, growth in economic activity is expected to remain at a broadly similar rate, and well above potential growth

Growth is expected to stabilise at an annual average rate of between 1.6% and 1.8% over the 2018-20 period, which should remain well above the estimated annual potential growth rate of 1.3% over the projection horizon. Consequently, the output gap is projected to close in 2019 and the possibility of sustaining a high growth rate in 2020 would also depend on potential growth trends. These projections were finalised as at 30 November 2017 as part of the Eurosystem macroeconomic projection exercise. They are based on technical assumptions with a cut-off date of 22 November and Insee quarterly national accounts published on 29 November. They also take into consideration the measures announced in the budget laws. Beyond 2018, over the 2019-20 period, the recently undertaken reforms and the direction of economic policy over the coming years will also impact the growth rate.

The factors supporting this growth should become more balanced

In 2018, 2019 and 2020, exports are expected to accelerate sharply, particularly in 2018 when they should grow by 5.9%. Foreign demand for French goods and services should grow at a strong pace. In addition, the catch-up in exports following the disappointing performance observed in 2016 and at the beginning of 2017, should contribute to an improvement in export market shares in 2018, despite the lagged negative effects of this summer’s appreciation of the euro. With imports remaining robust, the contribution of foreign trade is expected to be slightly positive. Business investment should continue to be supported by the increase in economic activity as well as by low interest rates, and is expected to continue to grow more markedly than GDP. However, there is unlikely to be a repeat of the high growth rates witnessed in 2016 and 2017, which took the corporate investment rate to a higher level than the previous peak of 2008, but were also accompanied by significant net borrowing and high levels of debt. Private consumption is projected to remain robust, with gains in purchasing power bolstered by the pick-up in wage income, while unemployment is expected to continue to decline. The tax measures set out in the budget laws should also help to lift household incomes from the end of 2018. Part of these gains should contribute to the increase in the saving ratio, towards 15.2% at end-2020, which is close to its long-term average (see section 2). Household investment was exceptionally robust in 2017, rising by 5.1%, but is projected to slow considerably in 2018‑20, to reach a similar pace of growth to household income, which is more sustainable in the long term.

Inflation, as measured by the change in the harmonised index of consumer prices (HICP), is expected to remain at a broadly similar rate in 2018 (1.4%) and 2019 (1.2%) to that of 2017 (1.2%). The upturn in 2018 should be primarily related to tax measures impacting tobacco and energy. Inflation is then projected to rise more sharply in 2020 to an annual average rate of 1.6%. Inflation excluding energy and food should gradually rise from 0.6% in 2017 to 0.8% in 2018, 0.9% in 2019 and 1.2% in 2020, on the back of falling unemployment and the impact of various specific factors (see section 3). Non-energy industrial goods inflation should remain contained until 2019 due to the effects of the recent appreciation of the euro. Service price inflation is also expected to be held back by the modest growth in labour costs (necessary to improve French competitiveness), and this effect should be accentuated in 2019 by the transformation of the Tax Credit for Competitiveness and Employment (CICE) into a direct reduction in employer social security contributions. The planned measures in the budget laws are expected to have an effect on the profile of inflation: service price inflation should fall each year as a result of the decrease in social housing rents, while increases in taxation on tobacco over a three-year period and on energy should sharpen the rise in headline inflation. In 2020, growth and the decline in unemployment should have a lagged positive impact, lending greater support to inflation.

A public deficit of just under 3% of GDP in 2017 and 2018, requiring tight spending control

The Banque de France projection incorporates the measures set out in the 2018 draft budget and the draft supplementary budget laws of 2 and 15 November 2017. Within this framework, the government deficit is projected to decline from 3.4% of GDP in 2016 to 2.9% in 2017, thanks primarily to the favourable macroeconomic environment. It should then stabilise at this level in 2018, below the Maastricht deficit ceiling. Constant monitoring and the ability to react rapidly to any sign of deteriorating public finances are therefore essential (see section 4). In 2018, the aggregate tax ratio (ratio of taxes and social security receipts to GDP) is expected to fall by 0.3 percentage point to 44.3% of GDP from 44.6% in 2017 (excluding the temporary effect of the repayment of the dividend tax). The newly planned tax cuts, which will affect household taxation in particular, should then have a greater impact in 2019 and 2020. In real terms, primary public spending (excluding tax credits and adjusted for CPI excluding tobacco) is expected to continue to increase, by 1.0% in 2018 after 1.1% in 2017. The savings measures set out in the 2018 draft budget laws should limit growth in spending in 2018, but not enough to prevent a deterioration in the structural balance in 2018 in a context of declining tax receipts. The primary structural balance is thus projected to remain broadly stable in 2017, but should then deteriorate markedly by 0.4 percentage point of GDP in 2018. The debt‑to‑GDP ratio is expected to continue to increase until 2019, and is only projected to stabilise in 2020.