Banque de France Bulletin no. 216: Article 3 Decline in profitability since 2005: French banks hold their own

In a context of low interest rates and the strengthening of regulatory requirements, the profitability of French and European banks deteriorated between 2005 and 2016. Conversely, the return on assets
of US banks climbed back up to its initial level at the end of the period after adjusting for the differences in accounting standards. However, the return on equity also fell sharply.

French banks were significantly less affected than their European competitors by the 2008 financial crisis and the 2011 sovereign debt crisis. They have also improved their operational efficiency, especially since 2012. In addition, like for US banks, their levels of equity more than doubled but their balance sheet total grew faster. European banks, for their part, recorded a smaller increase in their equity (up by 66%) and their balance sheet total remained stable. 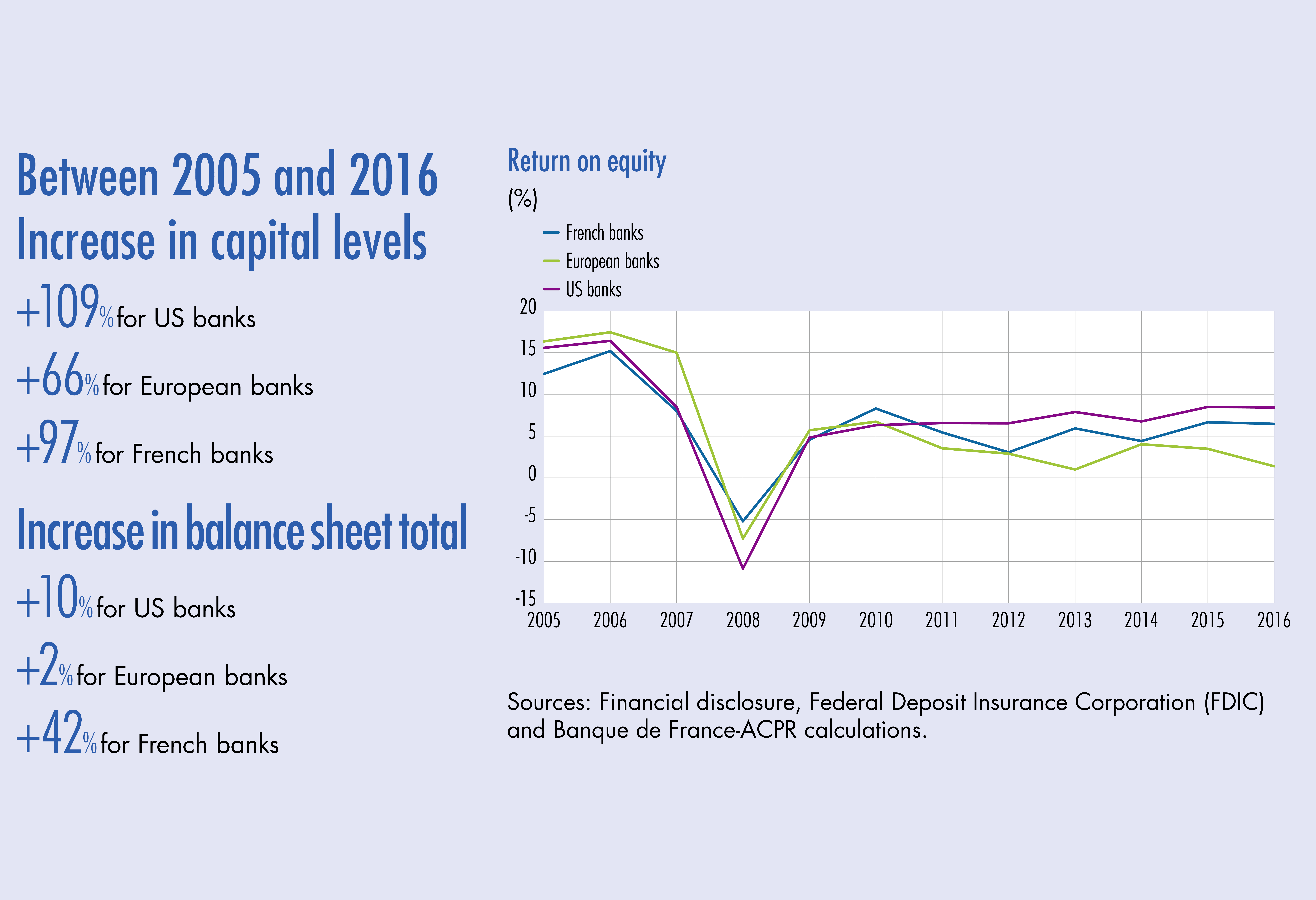 This article examines the changes in bank profitability, measured by return on assets (RoA) and return on equity (RoE), between 2005 and 2016, using a sample of 6 French banks, 15 European banks and 8 US banks including all the global systemically important banks in the three geographical areas considered (see methodological appendix). In particular, it seeks to measure the respective contributions of bank earnings, balance sheet size and equity levels to the observed changes.

While it has been stable for US banks, the return on assets of French banks has receded, but considerably less than that of European banks

The average RoAs of the three bank groups have seen mixed developments over the period (see Chart 1):

US banks continue to post a significantly higher RoA than their competitors; French banks have displayed a higher average RoA than that of other European banks since 2010, while their performance was slightly weaker before the crisis.  As regards French banks (see Chart 2a), the decline in the RoA can only be attributed to the rise in the balance sheet total between 2005 and 2016 (contribution of -11.8 bp), as their earnings increased slightly over the same period (contribution of 1.3 bp); in particular, the sharp rise in their net banking income (NBI)1 offset the increase in management costs, the cost of risk, tax expenses and exceptional items.

As regards the other European banks (see Chart 2b), the decline in the RoA reflects almost exclusively the decrease in earnings (contribution of -53.8 bp), even though the rise in the balance sheet total also had a slightly negative impact (contribution of -1.5 bp).