Productive capital operating times (COT) grew more in 2017 than in the previous year (up 3.7%, compared with a 1.6% increase in 2016), particularly in the transport equipment sector.
The average increase in COT observed in 2017 highlights the constraints faced by businesses trying to expand their activity. For example, more than 40% of businesses stated that certain obstacles prevented them from extending COT, the most important of which was the shortage of skilled labour.
Lastly, the extra depreciation allowance for tax purposes – the 2017 COT survey focus – led to more than 21% of businesses making capital investments sooner than originally planned following its introduction in 2015. Almost 12% of businesses surveyed say that they had been encouraged to increase their investments, with the increase in the value of investments amounting to around 18% following this French government measure. 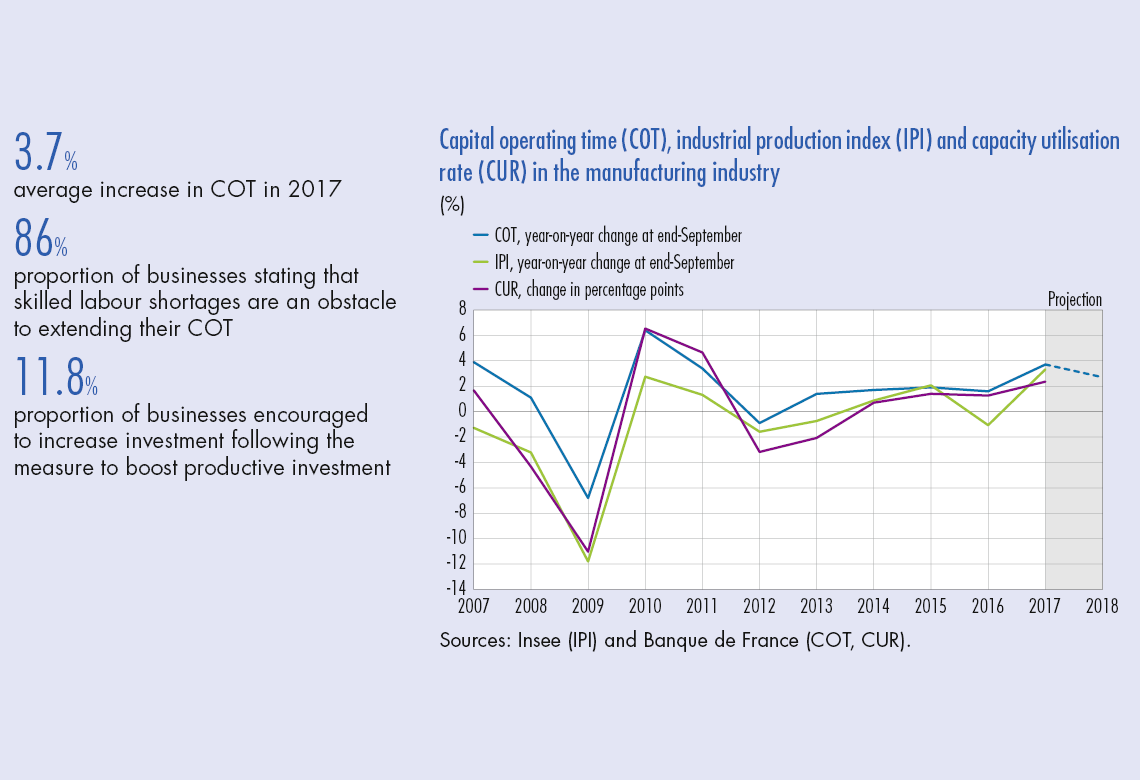 The Banque de France’s productive capital operating times (COT) survey provides data on the adjustments made by businesses to respond rapidly to changes in demand without resorting to new investments. The survey was recently used by Cette, Lecat and Jiddou (2016) to study production factor (capital, labour) adjustment and use (labour working time, COT, capacity utilisation rates) and thereby examine the impact of obstacles to extending COT on this adjustment path. The authors notably show that when faced with a demand shock, businesses first adjust via their capacity utilisation rate and capital operating times, and then later adapt their labour and capital stock.

A significant rise in COT in line with industrial activity

Changes in COT, measured every September by the Banque de France, are linked to changes in industrial activity. Manufacturing output was more buoyant in 2017 than in 2016 (see Table 1), and this change in productive activity was accompanied by a sharper increase in COT in 2017 than in 2016, in line with the capacity utilisation rate (see Chart 1).

Although COT decreased in 2017 in agriculture and manufacture of food products, it increased in the other sectors, with a particularly steep rise in the transport equipment sector. Broken down by business size, large firms reported an average increase in COT of 4.2%, which was higher than the 3.3% increase noted by small and medium‑sized industries (SMIs, with less than 500 employees) – see Table 1 and Charts 2a and 2b.

Business leaders expect COT to rise further in 2018, by 2.7% (see Table 1), and both SMIs and large firms also expect COT to increase, by 3.7% and 1.5%, respectively. All sectors foresee an increase in 2018. To lengthen productive capital operating times and thus the use of capital stock, businesses can extend their employees’ working time, or reorganise production with several operators from a team working shifts at the same post.