Working Paper Series no. 709: Digital vulnerability and performance of firms in developing countries

This paper provides evidence of the positive effects of email use on firm performance. Using a pseudo-panel from repeated cross-sections of more than 30,000 firms, surveyed between 2006 and 2014 in some 40 developing and transition economies, we adopt an IV approach emphasizing firm’s digital vulnerability to seismic shocks upon the telecommunications submarine cable network. Our results show that a 10% increase in email use incidence at the location level raises by 37-38% their total annual sales, by 22-23% sales per worker, by 12-14% the number of full-time workers. While these results are driven by the service sector, we find that a greater incidence of email use in locations increases the number of non-production and unskilled production workers in manufactures. Last, we find heterogenous but weaker evidence on the effect of email use on firms’ direct exports share in total sales. 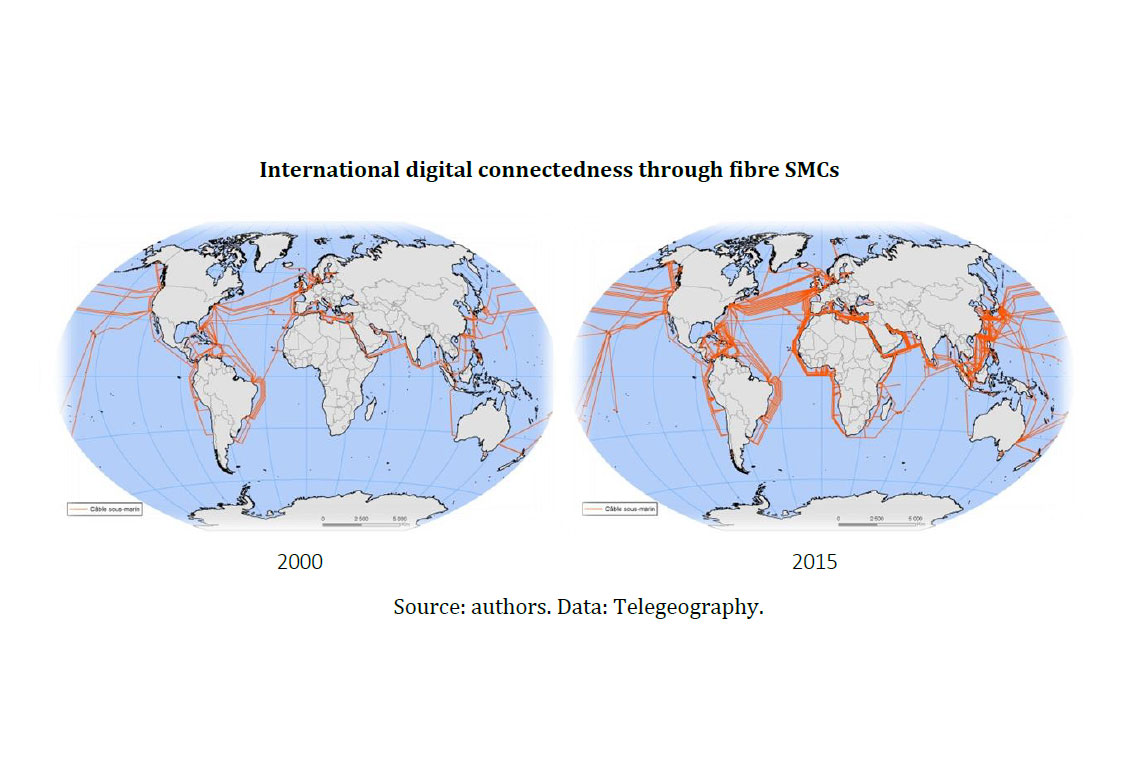 Over the last three decades, international connectivity underwent a dramatic improvement promoted by the laying of around 400 fibre submarine cables (SMCs). Nowadays, more than 99% of the world’s telecommunications – Internet content, phone and video calls, classified diplomatic messages – passes through SMCs. SMC international networks now irrigate a USD 20.4 trillion industry and connect 3 billion Internet users across the world. As a consequence, almost all coastal developing and transition countries are now plugged into the global Internet through SMCs. Fast-growing Asian and South American countries have been rapidly connected to Northern economies, and Africa’s digital isolation from the rest of the world has rapidly fallen since 2005. This rapid expansion of the international broadband infrastructure network and the following boom in Internet services raises strong expectations for many low-income countries’ economic catch-up, notably, through its potential for fostering innovation, productivity, trade, and job creation.

However, countries’ higher dependence on SMCs for international telecommunications has increased their vulnerability to SMC faults. SMC faults have local-level economic consequences, by disorganizing the economic activity, and depriving populations that are remote from core connectivity infrastructures of a fast, stable and cost-effective access to telecommunications. In this regard, seismic activity represents a major threat to the SMC network integrity, by shaking violently the underwater body, provoking turbidity currents, landslides, and seabed sand waves. Seismic risk around SMCs therefore represent an important concern for operators and governments, which in addition to economic costs, face high maintenance, repair, rerouting and insurance costs related to SMC failures.

In the 2000s, some papers, focused on aggregated data or on firm level data, find a positive effect of Internet access on international trade, productivity and growth. These positive impacts are mainly be explained by a reduction in transaction costs and improvements in knowledge spill-overs. This paper brings additional insights into this area of research by providing new evidence on the local impact of email use by firms on four outcomes – their revenue, their labour productivity, their exports and the size of their workforce – in developing countries. In addition, an innovation in this paper lies in its instrumental variable (IV) approach, emphasizing the firm’s vulnerability to shocks upon the SMC network. Our instrument set indeed reflects local spatial inequalities in terms of Internet access, by combining data on the SMC network’s exposure to seismic shocks with the firm’s location distance to international connectivity infrastructures. To examine to what extent email use shapes firm outcomes, IV within fixed-effects estimations are therefore conducted using WBES data on firms’ characteristics, outcomes and Internet usage.

Based on a large sample of firms located in more than 130 municipalities/provinces in some 40 developing and transition countries, IV estimates provide evidence of a large and positive impact of email use on firm performance at the location level. Indeed, we find that a 10% increase in the local incidence of email use among firms increases by 37-38% their revenues, by 22-23% average sales per worker, and by 12-14% the average number of full-time permanent workers. While these results are driven by the service sector, we find that a greater incidence of email use among firms at the location level increases the number of non-production and unskilled production workers in manufactures. Last, we provide heterogenous but weaker evidence on the effect of email use on firms’ exports share in total sales, perhaps because of the heterogeneous effects of reduced communication costs on exporting firms.