How do minimum wages (MW) shape the aggregate wage dynamics when wage adjustment is lumpy? In this paper, we document new empirical findings on the effect of MW on wage rigidity using quarterly micro wage data matched with sectoral bargained MW. We estimate a micro empirical model of wage rigidity taking into account minimum wage dynamics and we use a simulation method to investigate implications of lumpy micro wage adjustment for the aggregate wage dynamics. Our main findings are the following. Both national and sectoral MW have a large effect on the timing and on the size of wage adjustments. At the aggregate level, MW contribute to amplify, by a factor of 1.7, the response of wages to past inflation. Ignoring MW leads to underestimate the speed of aggregate wage adjustment by about a year. The elasticities of wages with respect to past inflation, the national MW and industry-level MW are respectively 0.42, 0.17 and 0.16. Finally, there are significant spillover effects of the NMW on higher wages transiting through industry-level MW. 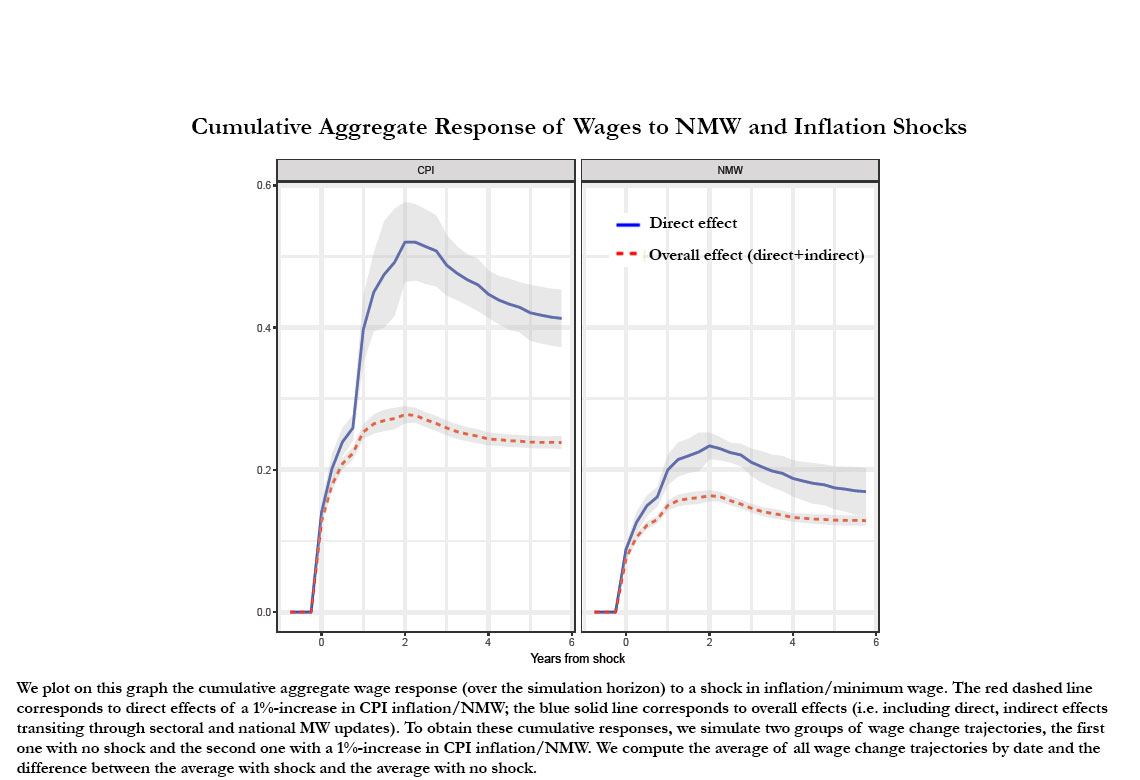 In standard macro models, wage stickiness is one of the key ingredients to generate fluctuations in employment or real effects of monetary policy. A recent but small literature has documented new stylized facts on wage stickiness. However, this literature often disregards minimum wage as an explicit potential source of wage rigidity while in Europe, a large share of workers can be affected by minimum wage policies. This paper aims at filling this gap and provides new micro evidence on how minimum wages (set by law or bargained with unions) can shape the aggregate wage dynamics.

To address this issue, we introduce a new empirical methodology to investigate implications of the lumpiness in micro wage adjustment for the aggregate wage dynamics. We first estimate a standard microeconometric wage rigidity model where the timing and the size of wage adjustments depend on inflation or unemployment but also on national or sectoral wage floors. We then simulate wages and minimum wages (based on parameter estimates of our micro models) and we aggregate simulated wage trajectories to describe how wages respond to a macro shock. This simulation exercize allows us: (i) to assess the aggregate wage persistence due to micro lumpiness in wage changes; (ii) to investigate how minimum wages shape but also amplify the transmission of a shock to aggregate wages. To implement this empirical exercize, we have matched comprehensive French data sets of millions of quarterly base wages, industry-level wage floors for more than 350 different industries and thousands of firm-level wage agreements over the period 2005-2015. Our main findings are the following:

First, wage bargaining institutions have an impact on the degree of micro wage rigidity. Time schedules of wage agreements and actual wage changes are highly synchronized: most wages changes are observed during the first quarter of the year when a vast majority of both industry- and firm-wage agreements are signed. The typical duration between two wage changes is one year which corresponds to the usual duration of wage agreement. We also show that the size of wage adjustments depends not only on inflation and unemployment but also on NMW and sectoral wage floors increases.

Second, micro wage stickiness does translate into a delayed aggregate wage response to a shock. A 1% increase in inflation takes between 4 and 5 years to be fully incorporated to aggregate wages (Figure below). Ignoring minimum wages would lead to underestimate the speed of aggregate wage adjustment by about a year.

Third, we estimate direct effects of the main drivers of aggregate wages. Minimum wages have a large effect on the aggregate wage dynamics: a 1% increase in NMW or sectoral wage floors has a cumulative impact (over a 5-year horizon) of respectively 0.13 pp and 0.16 pp, more than half the direct effect of inflation. Besides, minimum wages do amplify the effect of inflation on aggregate wages. Once we allow NMW and sectoral wage floors to react to shocks, the overall effect of inflation on aggregate wages raises to 0.42 pp and the effect of NMW to 0.17 pp (Figure below). This amplification effect is not homogeneous along the wage distribution: the NMW pass-through to higher wages is mainly due to sectoral wage floors for the highest deciles of the wage distribution whereas feedback loop effects play a major role for the lowest deciles of the wage distribution.