Working Paper Series no. 829: Does one (unconventional) size fit all? Effects of the ECB's unconventional monetary policies on the euro area economies

This paper aims at assessing the macroeconomic impact of unconventional monetary policies (UMPs) that the ECB has put in place in the euro area after the 2007 financial crisis. With this purpose, we first document how the relative importance of the main transmission channels of such measures has changed over time, with the portfolio rebalancing being generally more impactful than the signaling channel after the “Whatever it takes” speech in July 2012. However, we also provide evidence of a great degree of heterogeneity across core and peripheral economies, as well as over time. We then adopt a time-varying SVAR with stochastic volatility to account for such heterogeneity, by identifying UMP shocks via
“dynamic” sign restrictions. By means of counterfactual experiments, we provide evidence of how a different stance on the part of the ECB would have led to a significantly different economic performance of euro area economies. For instance, if the ECB had not put in place the measures adopted between 2014 and 2017, annual output growth would have been, on average, 0.67 percentage points lower in peripheral countries. 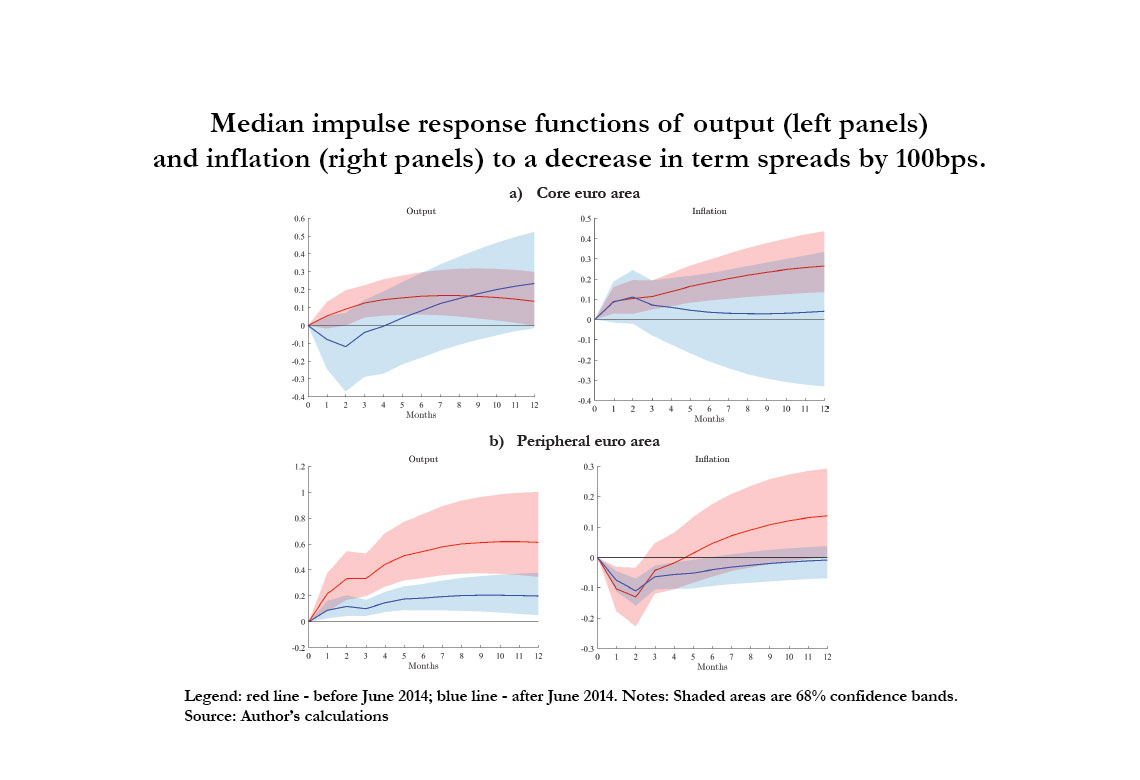 In the wake of the global financial market turmoil in 2007-2009, all major central banks loosened their monetary policies by aggressively cutting the policy rates to historically low levels and, after reaching the zero lower bound on short-term interest rates, by also embarking on a series of unconventional monetary policy measures (UMPs) aimed at containing the risks to economic and financial stability. As central bank balance sheets have increasingly become the most important monetary policy instrument (Gambacorta et al. (2014)), it becomes important to assess whether and how UMPs have impacted the real economy. In this regard, quantifying UMPs impact has posed new challenges to both empirical and theoretical frameworks, the major difficulty being that there is no well-defined instrument providing an encompassing evaluation of a central bank’s unconventional policy stance.

As to the transmission of UMPs to financial and economic activity, the literature has mainly focused on the interest rate channel, which, in turn, can be broken down in two main components:  1) portfolio rebalancing, which operates through changes in the term premia of target assets; 2) signaling, that relates to the ability of the central bank to shape expectations about the future path of interest rates. The present paper provides three contributions to the existing literature: i) it documents the relative importance of the portfolio rebalancing and signaling channels and assessing whether it has changed over time in the euro area (EA henceforth); ii) it produces evidence of the strong heterogeneity between core and peripheral euro area economies; iii) it shows that ECB’s UMPs have sustained the economic performance of peripheral economies.

Portfolio rebalancing and signaling channels are identified by decomposing the sovereign yields of core and peripheral euro area members in two main subcomponents:  i) a term premium; ii) a risk-neutral or expectation component.  Results of an event study around ECB’s main UMP announcements from 2008 onward show that term premia and risk-neutral yields have reacted in a different manner across the two groupings, with the signaling channel being much stronger in the peripheral economies compared to the core countries.  These dynamics have radically changes after the zero-lower bound (ZLB) kicked-in in June 2014.

We leverage on these stylized facts to identify UMP shocks in a structural Vector Autoregressive model with time-varying parameters and stochastic volatility (TVP-SVAR-SV). The structural identification is based on zero and sign restrictions which are at once group and time-contingent (“dynamic”), as they change across core and peripheral countries as well as before and after June 2014.  We show that the macroeconomic impact of ECB’s UMPs has significantly declined over time, above all in core economies.  Moreover, the same measures are found to exert a more meaningful impact on the  output  of  peripheral  members,  whereas the  economic  performance  of  core  members  is  affected through inflation only.

Finally, we set up a counterfactual experiment to assess the impact on macroeconomic aggregates of the set of UMPs implemented by the ECB over the period 2014-2017. Results show that, absent these measures, annual output growth of peripheral economies would have been significantly lower (-0.67pps).

publication
Working Paper Series no. 829: Does one (unconventional) size fit all? Effects of the ECB's unconventional monetary policies on the euro area economies
Download (EN)