Working Paper Series no. 482: Credit Risk in the Euro area

We construct credit risk indicators for euro area banks and non-financial corporations. These are the average spreads on the yield of euro area private sector bonds relative to the yield on German federal government securities of matched maturities. The indicators are also constructed at the country level for Germany, France, Italy and Spain. These indicators reveal that the financial crisis of 2008 has dramatically increased the cost of market funding for both banks and non-financial firms. In contrast, the prior recession following the 2000 U.S. dot-com bust led to widening credit spreads of non-financial firms but had no effect on the credit spreads of financial firms. The 2008 financial crisis also led to a systematic divergence in credit spreads for financial firms across national boundaries. This divergence in cross-country credit risk increased further as the European debt crisis has unfolded since 2010. Since that time, credit spreads for both non-financial and financial firms increasingly reflect national rather than euro area financial conditions. Consistent with this view, credit spreads provide substantial predictive content for a variety of real activity and lending measures for the euro area as a whole and for individual countries. A VAR analysis indicates that disruptions in corporate credit markets lead to sizeable contractions in output, increases in unemployment, and declines in inflation across the euro area. 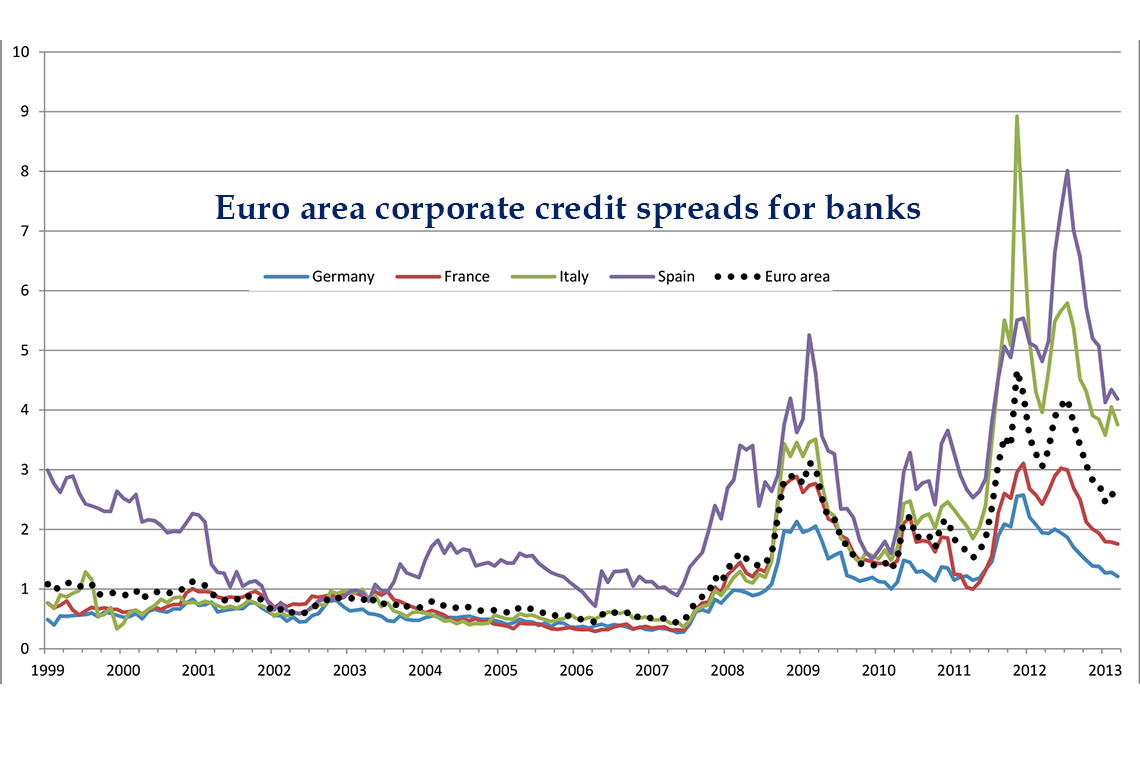 Gauging the extent of financial distress for countries within the euro area remains a considerable challenge. Market interest rates arguably provide good indicators of credit risk as they reflect, in real time, the beliefs of many investors. Although market-based indices of  an average of corporate bond yields are commercially available, these are frequently constructed from arbitrary samples of firms whose characteristics evolve over time in a nontransparent manner. Furthermore, the lack of information regarding the underlying structure of the portfolio leads to a maturity mismatch when constructing credit spreads as the difference in yields between corporate bonds and sovereign bonds. This maturity mismatch confounds measurement by not properly distinguishing between credit risk and term premia.

This paper introduces new indices of credit risk in the euro area. These indices aggregate the information obtained from thousands of corporate bonds and hundreds of thousands of monthly observations on the yield to maturity of such bonds since the launch of the euro in January 1999. Following Gilchrist et al. (2009) and Gilchrist and Zakrajsek (2012b), we construct a credit risk spread at the bond level as the difference between the corporate bond yield and the yield of a German Bund zero coupon bond of the same maturity. By constructing credit spreads at the bond-issuance level we thus avoid confounding credit risk premiums with term premiums. We then aggregate these bond-level credit spreads to obtain indices of credit risk for two sectors, banks and non-financial corporations (NFC thereafter) for the four largest euro area countries: Germany, France, Italy and Spain. By aggregating this information across countries, we are also able to construct credit spreads for the euro area as a whole.

In addition to documenting the evolution of credit spreads across countries within the euro area, we also analyze the information content of these credit spreads by examining their ability to predict commonly used indicators of economic activity, inflation and bank lending. These results imply that both financial and non-financial credit spread indices are highly robust leading indicators for economic activity and the growth in bank lending. In terms of aggregate spending components, we find that both bank and NFC credit spreads are particularly informative about the future growth in non-residential investment both in the euro area and at the country level. In contrast, only bank credit spreads appear to be robust predictors of the future growth in consumption spending.

In order to characterize the response of economic activity to disruptions in credit markets we also estimate a Factor-Augmented Vector Autoregression (FAVAR) and study the impulse response of euro area and country-specific measures of economic activity to shocks to credit spreads that are orthogonal to information contained in both real activity series and other asset prices. Consistent with the findings that credit spreads predict future economic activity, the FAVAR results imply that disruptions in credit markets lead to a sharp reduction in stock returns, significant declines in output and inflation, and increases in unemployment across the euro area and within each of the four countries.