Some Euro area money market rates have been standing below the deposit facility rate since 2015, which coincided with the start of the Eurosystem’s public sector purchase program (PSPP). In this paper, we explore empirically the interactions between the PSPP and short term secured money market rates (repo rates). We document different channels through which asset purchases may affect the various segments of the Euro area repo market. Using proprietary data from the PSPP purchases and transactions made on the repo market for specific securities (“special”), our results show that the PSPP has contributed to push down repo rate, in particular prior to January 2017. On average, purchasing 1% of a bond outstanding is associated with a decline in its repo rate of -0.78 bps. 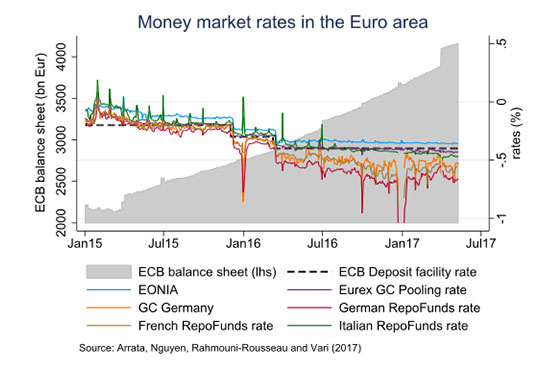 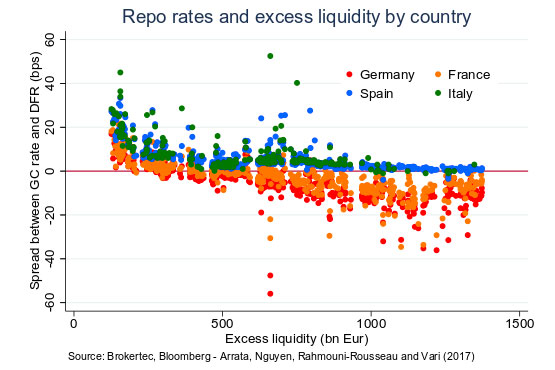 Money market rates dropped to historically low levels in most economies, and in some countries trade below zero. In the Euro area, this is the case for both unsecured and secured money market rates. Repo market– in which transactions are secured by collateral – is crucially important for the Euro area financial system, as it represents by far the most active segment of interbank activity.

Repo rates particularly gained attention as they not only dropped below zero but also in some countries below the ECB deposit facility rate (DFR). At this rate, the ECB is paying interest rate on excess reserves, in principle deterring any market participant (with access to this facility) to lend liquidity below.

This deviation of repo rates almost coincided with the start of the large-scale purchases of sovereign bonds by the Eurosystem in 2015 (PSPP, Public Sector Purchases Program), and is often associated with distortions that would have be created by the program. The resulting dispersion of money market rates, as shown in the graph below, may reduce the monetary policy pass-through to short term rates, i.e. reduce the traction of the central bank operational tools to transmit the monetary policy stance.

In this paper, we try to assess the channels through which PSPP might have contributed to lowering repo rates. In particular, aggregate effects (such as excess liquidity, counterpart of the purchases) may coexist with individual-bond effects related to scarcity affecting bonds purchased by the PSPP. To disentangle these two channels, we distinguish two repo market segments, the GC (« General Collateral ») secured by an undetermined bond from a basket, and the SC (« Specific Collateral ») secured by an individual predetermined bond. The first is a priori a liquidity-driven market, while the latter is said to be « collateral-driven », as it is typically the market in which market participants borrow specific bonds, and thus in a sense price the bonds’ scarcity.

Using trade-by-trade data from the most used repo platform in the Euro area and proprietary data on individual bond purchases by the Eurosystem, we first document the distribution of GC and SC rates in each of the seven largest jurisdictions of the Euro area. Second, we run a panel regression analysis to determine whether PSPP purchases are associated with lower repo rates between January 2015 and May 2017.

Our results suggest that PSPP has indeed two distinct types of effects on repo rates. The first one is related to aggregate effects of the programme, such as the increase in excess liquidity in the hands of market participants. We show that depending on countries, the relationship between excess liquidity and GC repo rates may vary, and in any case excess liquidity has more impact on core countries GC repo rates than peripherals. The second one is linked to the individual bond scarcity, as for bonds purchased, PSPP withdraws part of the outstanding from the market and thus limits the quantity available for lending in the repo market. Incidentally, we show that GC rates reflect the cost of borrowing the less valuable bonds in the SC market, so that in a jurisdiction where all bonds trade on special, GC cannot be seen as a pure risk-free rate anymore.

Other determinants are at play in the repo rates dynamics. Interestingly, end of periods (month, quarter) are associated with increased pressure on repo rates, which can be linked to regulatory reporting dates. Indeed, regulation may affect the repo market through different types of effects: regulatory demand of high quality assets that would not be available for lending in the repo market ; balance sheet costs penalizing repo transactions as they have an impact on the balance sheet size, etc.

In any case, central banks have instruments that may be fine-tuned to alleviate pressure in the repo market, if needed. We find that the period of implementation of the Security Lending Facility (SLF) through which market participants can borrow limited amounts of securities purchased by the Eurosystem under the PSPP against cash (since 15th Dec 2016) is associated, on average, with lower pressure on repo rates.

Finally, our study shed light on the possibility that central bank purchases are accommodated by short sales and covered in the repo market in the first place, contributing to a better understanding of the mechanisms behind asset purchases programs.