We quantify the macroeconomic effects of the European Central Bank’s unconventional monetary policies using a DSGE model which includes a set of shadow interest rates. Extracted from the yield curve, these shadow rates provide unconstrained measures of the overall stance of monetary policy. Counterfactual analyses show that, without unconventional measures, the euro area would have suffered (i) a substantial loss of output since the Great Recession and (ii) a period of deflation from mid-2015 to early 2017. Specifically, year-on-year inflation and GDP growth would have been on average about 0.61% and 1.09% below their actual levels over the period 2014Q1-2017Q2, respectively. 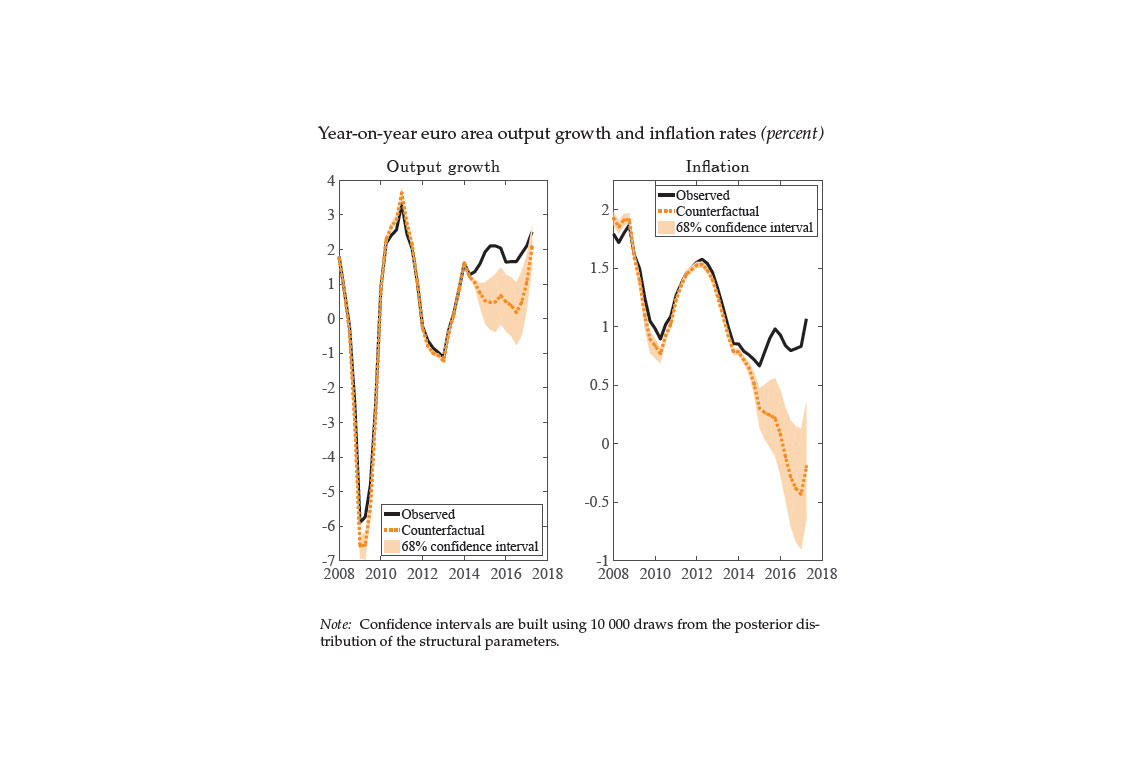 Decisions of central banks rely on an assessment of their monetary policy stance, i.e. the contribution made by monetary policy to real economic and financial developments. In the past, policymakers could compare the policy rate to the prescriptions of simple policy rules, to get a sense of whether their actions were appropriate in view of their objectives. However, the severity of the financial crisis in 2008 led many central banks to lower their key rates at levels close to their effective lower bound (ELB), limiting their ability to stimulate further the economy. Unable to move the short-end of the yield curve, central banks turned to a number of unconventional policies to provide additional monetary accommodation. In the context of the euro area, these policies included an increase in the average maturity of outstanding liquidity, the use of forward guidance, several asset purchase programs and negative deposit facility rates. With the implementation of such measures, there is no directly observable indicator that summarizes the stance of policy. How can one quantify the effects of these new policy measures from a macroeconomic perspective?

In this paper, we address this question by integrating a set of shadow policy rates in a dynamic stochastic general equilibrium (DSGE) model to reveal the macroeconomic effects of unconventional measures implemented by the European Central Bank (ECB). The shadow rate is the shortest maturity rate, extracted from a term structure model, that would generate the observed yield curve had the ELB not been binding. It incorporates both the effect of monetary policy measures on current economic conditions as well as market expectations of future policy actions. The shadow rate coincides with the policy rate in normal times and is free to go into negative territory when the policy rate is stuck at its lower bound. Particularly, exploiting the entire yield curve allows to account for the influence of direct and/or indirect market interventions on intermediate and longer maturity rates. It can therefore be used as a convenient indicator for measuring the total accommodation provided by both conventional and unconventional policies.

Therefore, we propose to compare a Taylor rule based on the common component extracted from a set of shadow rates with the Eonia rate. Taking the common component allows us to address the uncertainty surrounding the measurement of shadow rates. The resulting shadow rate is then used to extract the shocks stemming from all monetary policy actions within our DSGE model. Through a counterfactual exercise, these shocks can subsequently be replaced by shocks that would have kept the shadow rate at the Eonia rate level, i.e the rate that represents the conventional part of monetary policy. This analysis enables us to isolate and gauge the effects of unconventional policies on economic activity and inflation.

We find that in the absence of such monetary policies, the euro area would have suffered a quarterly output loss of about 4.5% in 2017Q2. Moreover, these measures helped in avoiding a period of deflation from mid-2015 to early 2017. This translates into year-on-year (y-o-y) inflation and GDP growth differentials of 0.26% and 0.51% on average over the period 2008Q1-2017Q2, respectively. Drawing attention on the period 2014Q1- 2017Q2, when public and private sector asset purchase programs have been announced and conducted, y-o-y inflation and GDP growth would have been lower by 0.61% and 1.09%, respectively (see figure below).  Our approach has the advantage of overcoming the computational issues associated with the presence of the ELB by using traditional estimation techniques..