Working Paper Series no. 657: Firm Size and the Intensive Margin of Import Demand

We use French microdata to test an ubiquitous property of firm-based models of importing. When firm efficiency is factor neutral and input prices and qualities are common across firms, firm size should have no effect on expenditure shares on the different products and varieties sourced, holding the extensive margin constant. We show that this property is not supported by the data. Holding the sourcing strategy fixed, we find that larger firms (i) have lower import shares, (ii) concentrate their import spending on their top varieties and (iii) pay higher prices for their imported inputs. Our findings imply that input trade, through the intensive margin, is less beneficial for larger firms. Our results are consistent with a complementarity between firm productivity and input quality. 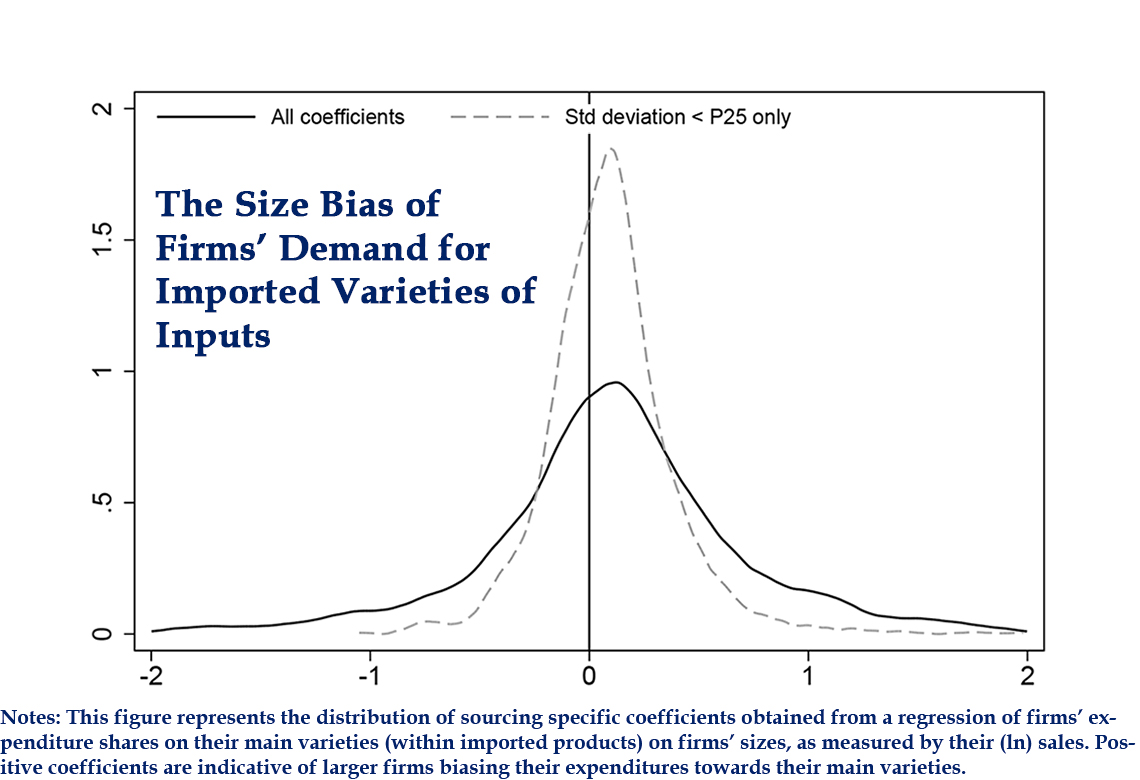 We analize the properties of a framework of importing which nests most of the contributions in the literature on input trade (e.g. Goldberg et al., 2010, Halpern et al., 2015, Gopinath and Neiman, 2014 or Antràs et al., 2017). Firms produce using a set of inputs that can be sourced domestically or from multiple foreign countries. The different varieties are imperfect substitutes in production and technology features constant returns to scale given the set of inputs sourced. Firms are price takers in input markets but can compete in output markets in an unrestricted way. Moreover, firm efficiency is factor neutral and input qualities and prices are common across firms. A prediction of this model is that, holding the set of sourcing countries fixed, firms’ expenditure shares on the different input varieties depend only on the prices and qualities of the sourcing countries and should therefore be equalized across importing firms. Firm characteristics should be irrelevant: in this sense, the intensive margin of input trade is homothetic.

The empirical results however show systematic violations of this prediction. First, there are important idiosyncrasies in how firms allocate their spending across a common set of trading partners. To fix ideas, consider the case of parts of wrapping machinery, a particular 8-digit product. French importers who source this product from only Italy and Germany feature very different spending patterns. While 25% of these firms spend more than 90% of their import budget on the German variety, an equal number of firms has the exact opposite spending pattern and almost exclusively sources from Italian suppliers. We show that this pattern of disagreement is not specific to this particular product but holds generally for all products and sourcing strategies. Hence, firms' intensive margin sourcing patterns are by no means fully determined from country characteristics, as implied by standard models.

More importantly, we show that this disagreement across firms is not merely the result of idiosyncratic noise but is systematically related to firm size. First, large firms feature smaller import shares once the extensive margin is controlled for. This finding has normative implications as import shares summarize the productivity effects of international sourcing (Blaum et al., 2016). In particular, this implies that, holding the extensive margin fixed, international trade is substantially less beneficial for larger firms.

Second, we find similar systematic rejections of the baseline model for the allocation of import expenditure across imported varieties (see figure). In particular, the distribution of foreign expenditure is substantially more concentrated for larger firms: we find that firm size is positively correlated with the share of spending allocated to the top country within narrowly defined products. More generally, larger firms feature a distribution of spending across foreign varieties which places higher mass on their higher ranked varieties.

Finally, we explore how the baseline framework could be amended to rationalize these facts. We provide two additional pieces of evidence that suggest the presence of a complementarity between firm productivity and input quality. First, we show that, holding the extensive margin fixed, larger firms pay higher prices for their inputs. This finding is consistent with Kugler and Verhoogen (2012), who interpret a similar correlation as reflecting a quality-productivity complementarity. Second, we show that larger firms pay particularly high prices for their top varieties. To the extent that prices reflect quality, these findings suggest that larger firms procure high quality inputs within foreign markets and they particularly do so in their top markets.