Working Paper Series no. 736: The FR-BDF Model and an Assessment of Monetary Policy Transmission in France

This paper presents the new model for France of the Banque de France (FR-BDF), as well as its key implications for the analysis of monetary policy transmission in France. Relative to our former model, this new semi-structural model has been improved along three dimensions: financial channels are richer, expectations now have an explicit role and simulations now converge toward a balanced growth path. We follow the approach of the FRB/US model, where agents can form their expectations in two different ways, VAR-based or model-consistent, and where non-financial behavior react with polynomial adjustment costs. For standard monetary policy shocks, FR-BDF shows a stronger sensitivity than our former model, due to the widespread influence of expectations. Then, we show that, under model-consistent expectations, FR-BDF does not suffer from the forward guidance puzzle. Finally, Eurosystem asset purchase programmes have notable effects in FR-BDF, with a stronger transmission through exchange rates than term premia. 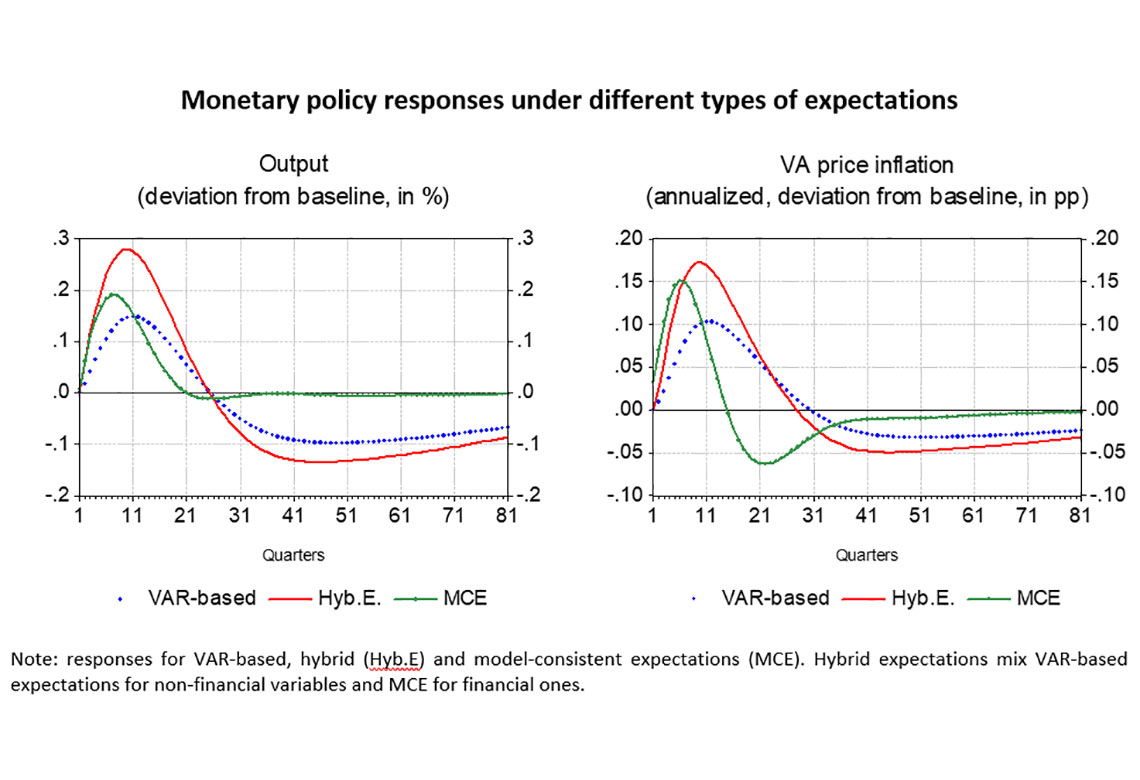 The model for France of the Banque de France (FR-BDF) is the new semi-structural replacement of the older model Mascotte. FR-BDF is a large-scale model for France, which contains detailed behavioral equations as well as a detailed accounting framework. It is used both for medium-run projection exercises and for policy analysis. The French economy is modeled as a small-open economy under fixed exchange rates with an exogenous interest rate due to the constraints of the Eurosystem projection framework. The overall model structure is strongly inspired by the US model of the Federal Reserve Board (FRB/US). This model combines economically meaningful expectations, a good empirical fit due to the Polynomial Adjustment Costs (PAC) framework and ease of estimation due to the separability of model blocks.

Three key features should be emphasized among the improvements of FR-BDF with respect to Mascotte. First, FR-BDF has richer financial channels than Mascotte. It has a large set of interest rates, an endogenous term structure and endogenous nominal exchange rates. Second, expectations play an explicit role, both for financial and non-financial variables, as expectations are a major transmission channel of monetary policy shocks. Expectations can be modeled based on a vector autoregressive model (VAR) which summarizes the state of the economy. We can also allow expectations to be consistent with the model and forward-looking, which we label Model-Consistent Expectations (MCE). Third, FR-BDF has a well-defined supply block as well as a balanced growth path toward which it converges smoothly and endogenously in unconditional simulations.

Concerning short run dynamics of FR-BDF under VAR-based expectations, one striking feature of our impulse responses to positive and temporary demand shocks is related to the absence of any feedback from monetary policy. The expansionary effect of these shocks deteriorates the competitiveness, weights on the output gap, leading later to disinflation and bringing the real exchange rate back to its baseline level. Impulse responses to supply shocks illustrate the important role played by the supply block of this model at horizons that could matter for medium-run forecasts. For example, after a shock that gradually raises labor efficiency by 1%, real output increases by 0.6 percentage points over a 4-year horizon.

In a last section, we analyze monetary policy transmission in France with three experiments through the lens of FR-BDF. First, we assess the impact of a standard monetary policy shock. FR-BDF shows a stronger response than our former model and this can be related to the influence of the short term rate through expectations. There are some differences in outcomes that depend on how expectations are modelled (see figure): when non-financial variables are modeled in a forward-looking manner (full MCE case), this creates a dampening effect in comparison to the case where they would be backward looking (hybrid case).

publication
Working Paper Series no. 736: The FR-BDF Model and an Assessment of Monetary Policy Transmission in France
Download (EN)