At the end of 2017, France’s national wealth (or net worth) amounted to EUR 14,762 billion, equivalent to 7.9 times its net domestic product for the year. After already rising sharply in 2016 (growth of 2.7% in current euro), it grew by 3.7% in 2017, fuelled by increases in stock market prices and in the price of land and buildings. Household net worth rose by 3.8% over the year, largely driven by growth in real estate prices. The value of non-financial corporations’ own funds also continued to rise at a very strong pace (10.2% growth after 5.8% in 2016). As in previous years, this was attributable to the gains in stock market prices over 2017. Financial corporations’ own funds also increased over the year, albeit at a slower pace than for non-financial corporations. After declining for six consecutive years, general government net worth expanded to EUR 190 billion in 2017 from EUR 124 billion a year earlier, with the increase stemming mainly from price variations – in particular a rise in the valuation of publicly owned companies. 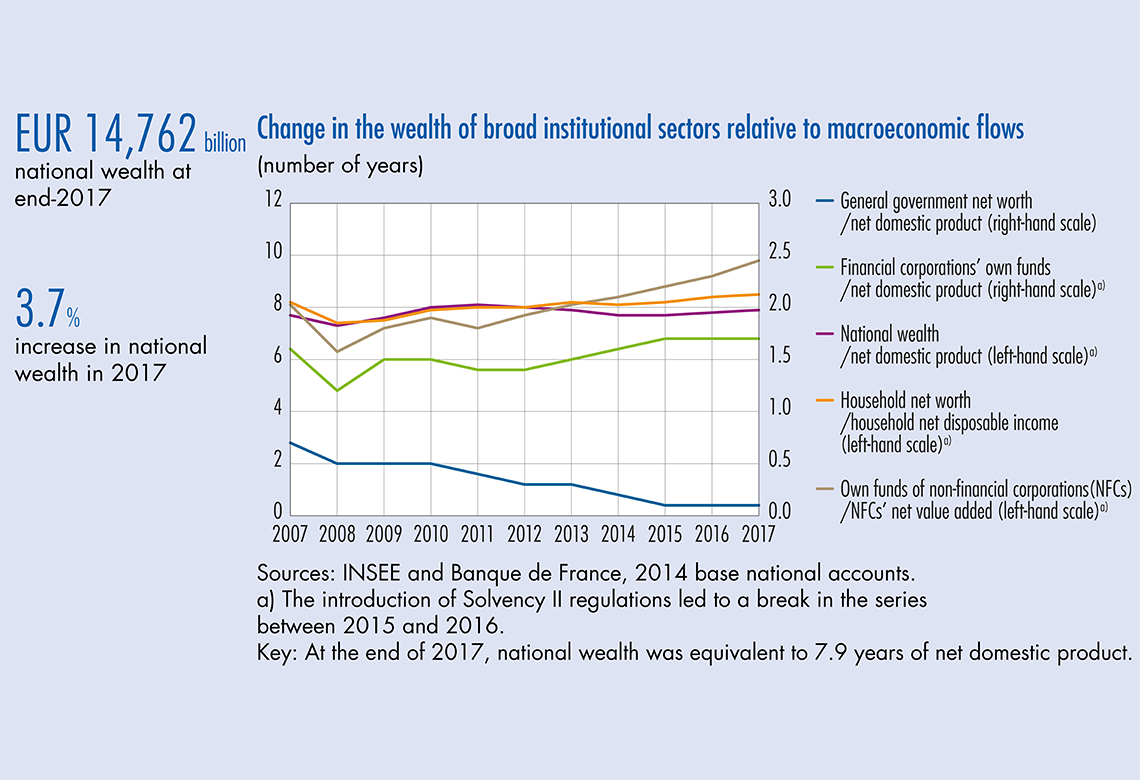 At the end of 2017, household net worth (see definitions in Box 3) totalled EUR 11,494 billion, equivalent to nearly 8.5 times their net disposable income (see Chart 1). The figure was up 3.8% year-on-year, after a 3.0% growth rate in 2016. Around two thirds of household net worth is made up of non-financial assets, the majority of which take the form of real estate holdings (see definitions in Box 3). In 2017, the value of these real estate holdings rose by 3.3% (compared with 2.9% growth in 2016). The acceleration was driven by stronger gains in the price of second-hand dwellings (3.3%) and by high volumes of new construction. Overall, household non-financial wealth expanded by 3.5% in 2017 to a total of EUR 7,679 billion. The increase was stronger than the 3.0% rise seen in 2016, and higher than the average rate of growth over the previous decade (2.4% per year between 2005 and 2015; see Table 2).

With regard to financial assets, households continue to favour bank savings products. Currency and deposit holdings thus rose by 4.6% in 2017 (after 4.1% growth in 2016), reflecting a preference for passbook savings over more high-risk investments, and continuing strong inflows into overnight deposits. In the low interest rate environment, household debt security holdings dropped fairly markedly (decline of 12.5% after a 3.8% fall in 2016). Meanwhile, holdings of equity and investment fund shares grew by 8.1% after 4.9% growth in 2016, reflecting a stronger price effect in 2017 – the SBF 120 index gained 10.8% over 2017 compared…

Article 1 : France’s national wealth in 2017: Robust growth driven by real estate prices
Article 4 : Foreign direct investment in France goes to both the most robust and the most fragile companies