Banque de France Bulletin no. 221: Article 4 Foreign direct investment in France goes to both the most robust and the most fragile companies

Since 2015, foreign direct investment in France has been at a high, while companies that are on average larger and more efficient tend to be the target of foreign investors. In this context, the open debate around the concept of attractiveness generally swings between two seemingly contradictory reactions: the satisfaction of attracting foreign investors to finance the development of French companies and the fear of seeing those same investors lay their hands on France’s industrial and commercial treasures. Research on the subject has fuelled both hypotheses by showing that in general non-resident investors “cherry pick” – they buy the most efficient companies. Without settling the debate, this article uses a dispersion analysis to show that while non-resident investors may clearly favour high-potential companies, they also target companies in poor financial health. 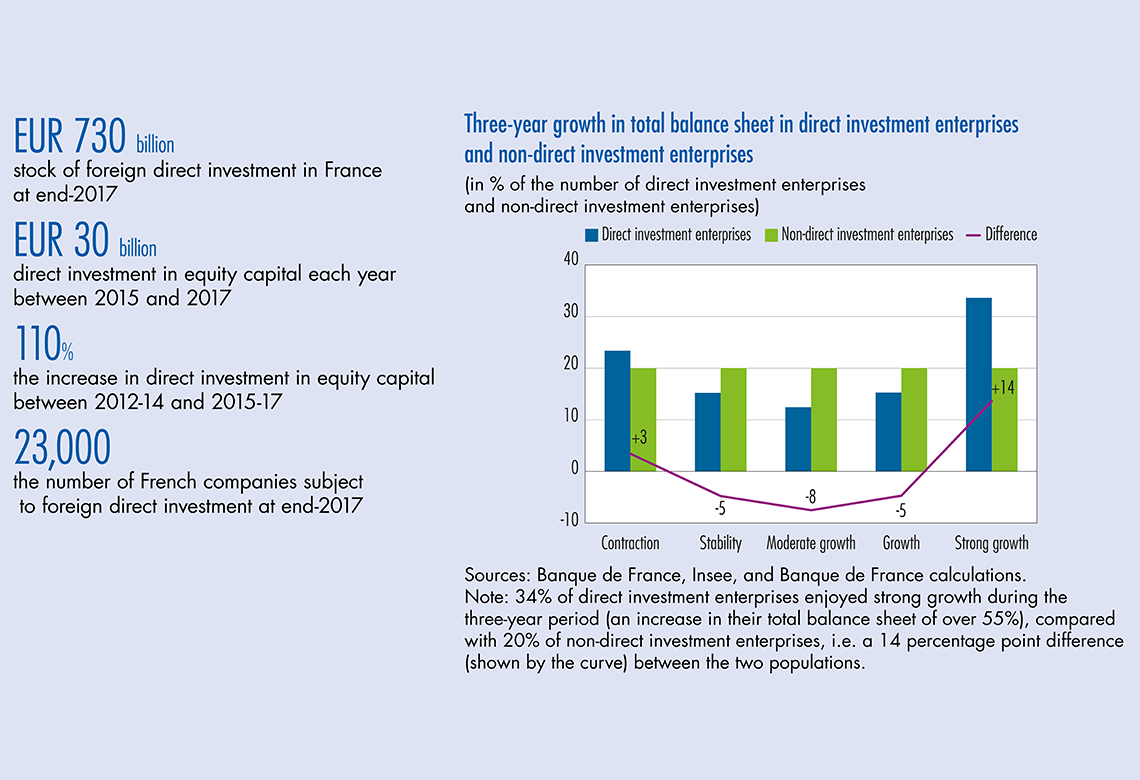 In total, foreign direct investment (FDI) in France amounted to almost EUR 120 billion over the 2015-17 period. This is three times more than during the previous three years and almost as much as total FDI for 2008 to 2014. During the past three years, these investments have on average represented 2% of annual gross domestic product (GDP). In 2017, France was one of only four Organisation for Economic Co-operation and Development (OECD) countries that saw a year‑on‑year increase in their inward foreign investments. In total, the stock of foreign direct investment in France stood at EUR 730 billion at the end of 2017.

The majority of these investments take the form of equity capital transactions, such as purchases of shareholdings or mergers and acquisitions, which reached a record high in 2015-17, with an annual rate of almost EUR 30 billion. Furthermore, every year, part of pre-tax profit attributable to non-resident owners of French companies is not distributed and is instead allocated to reserves as “reinvested earnings”. This represented around EUR 7 billion in new investments per year between 2015 and 2017. Lastly, the flows of intragroup loans and borrowings, which to a large extent reflect the cash flow movements of large multinational groups, generated a net capital inflow in 2017, following a slight outflow in 2016 (see Chart 1).

The economic sectors targeted by the direct investments made between 2015 and 2017 partly stand out from those traditionally chosen for investment (identified from stock statistics based on total past investments). For example, the construction sector received almost 20% of foreign direct investment from 2015 to 2017, but only accounted for 3% of stocks. This new orientation is in keeping with a disenchantment with financial and insurance activities. However, industry (see Box 1) and real estate activities continue to predominate, accounting for more than half of stocks and flows between them from 2015 to 2017 (see Chart 2).

The United States is the leading investor country in France

Direct US investments in France based on the ultimate investor approach amount to almost EUR 120 billion or nearly one-fifth of total FDI stock, outstripping investments from Germany or Switzerland (EUR 80 billion each) and the United Kingdom…

publication
Banque de France Bulletin no. 221: Foreign direct investment in France goes to both the most robust and the most fragile companies
Download (FR)
Economy and international financing

Article 1 : France’s national wealth in 2017: Robust growth driven by real estate prices
Article 4 : Foreign direct investment in France goes to both the most robust and the most fragile companies