Over the last decades, the composition of financial wealth of French households has dramatically changed. We seek explanatory factors for these changes by estimating an extended version of Deaton and Muellbauer (1980) model applied to French households’ portfolio choices. We find that most of the estimated parameters of the benchmark model are in line with economic priors. In particular, wealth and real returns are the key determinants of the long run dynamics of the different asset shares in the portfolio. We use the model to simulate the effect on French households’ portfolio allocation for the replacement in 2018 of the various tax regimes of most financial products with a flat tax on savings income. We find that the flat tax should support investment in equities at the expense of life insurance contracts. 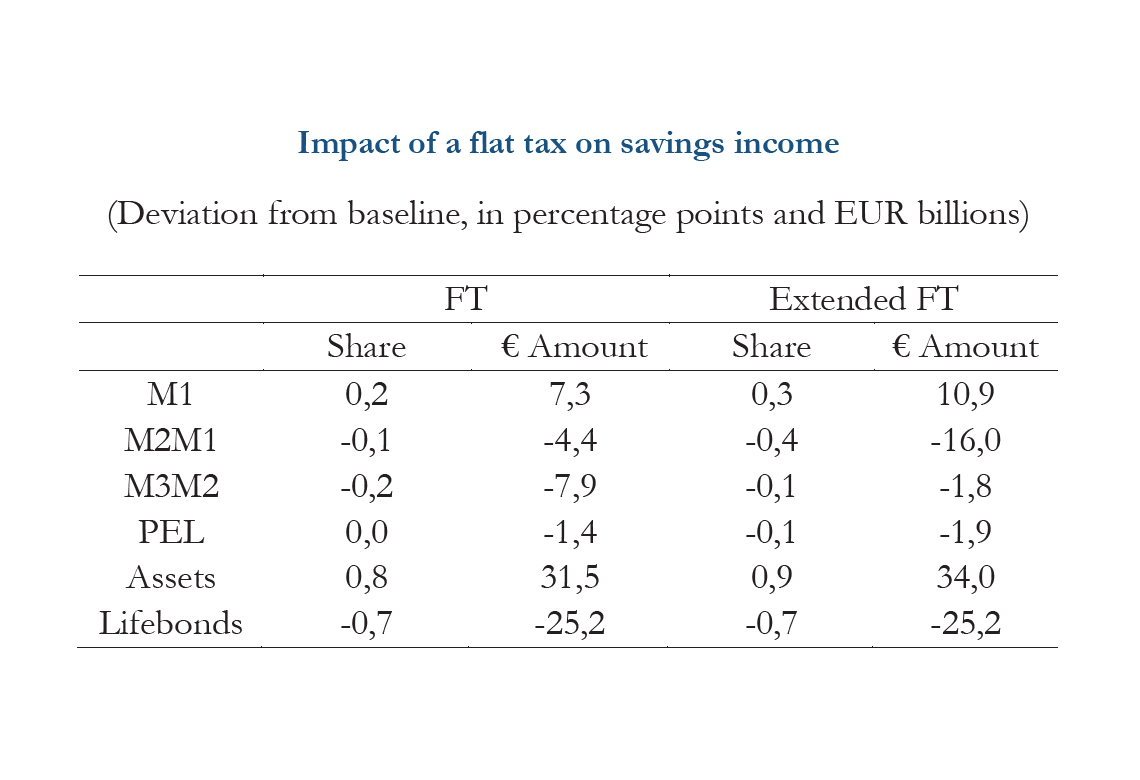 French households have sharply increased their accumulation of financial wealth over the last three decades. In addition, the structure of households’ financial portfolio greatly evolved over the period 1978-2016. For instance, currency plus overnight deposits and short-term saving deposits accounted for 58% of total financial wealth in 1978 and only around 30% in 2016. Life insurance contracts accounted for 4% of total financial wealth in 1978; about three decades later, this asset represents 44% of French households’ portfolio. This paper seeks to find explanatory factors of these changes. For this purpose, the choice of a model structure has to be made.

There are six shares but the baseline model is a dynamic system of only five equations. In order to meet adding-up conditions requirements imposed by demand theory (Blake, 2004), we drop one equation (the share of PEL, which is relatively weak) from the dynamics system and infer its parameters from the restrictions conditions.  We add two exogenous variables (uncertainty or risk factor and business cycle factor). The system is estimated with three-stage least squares over the sample 1999-2016.

We find that each asset is significantly and positively correlated with its own return. We also find cross-effects between real returns and financial assets, with substitution effects prevailing overall. As regards wealth elasticity, it is notable that there is a strong positive effect of wealth on Lifebonds. Conversely, we note a negative link between some financial assets (M1, M3M2), of a liquid nature, and wealth. According to Blake (2004), these assets are wealth-inferior assets with a long run negative elasticity. Finally, only M1 is significantly correlated with the business cycle. Unexpectedly, the other shares, especially the Assets one, are not significantly impacted by real or financial risk factors.

We use the empirical model to simulate the effect on French households’ portfolio allocation of the replacement in 2018 of the various tax regimes of most financial products with a flat tax (FT) on savings income. Furthermore, the effects of a scenario, which we label “Extended FT” and in which the FT would be extended to all financial products (Pfister, 2018), are also shown. The long-term impacts on outstanding amounts at end-2017 are displayed in the Table below. In the long run, the FT would lead to a substitution out of Lifebonds and, to a lesser extent, M2M1 and M3M2 into Assets and, to a lesser extent, M1, with PEL being unaffected.       An “Extended FT” would also cover so-called A passbooks included in M2M1. The column “Extended FT” in the Table below shows that the substitutions resulting from the FT as it stands would be strengthened if the FT were extended to all financial products’ income.