Working Paper Series no. 744: The Global Financial Cycle and US Monetary Policy in an Interconnected World 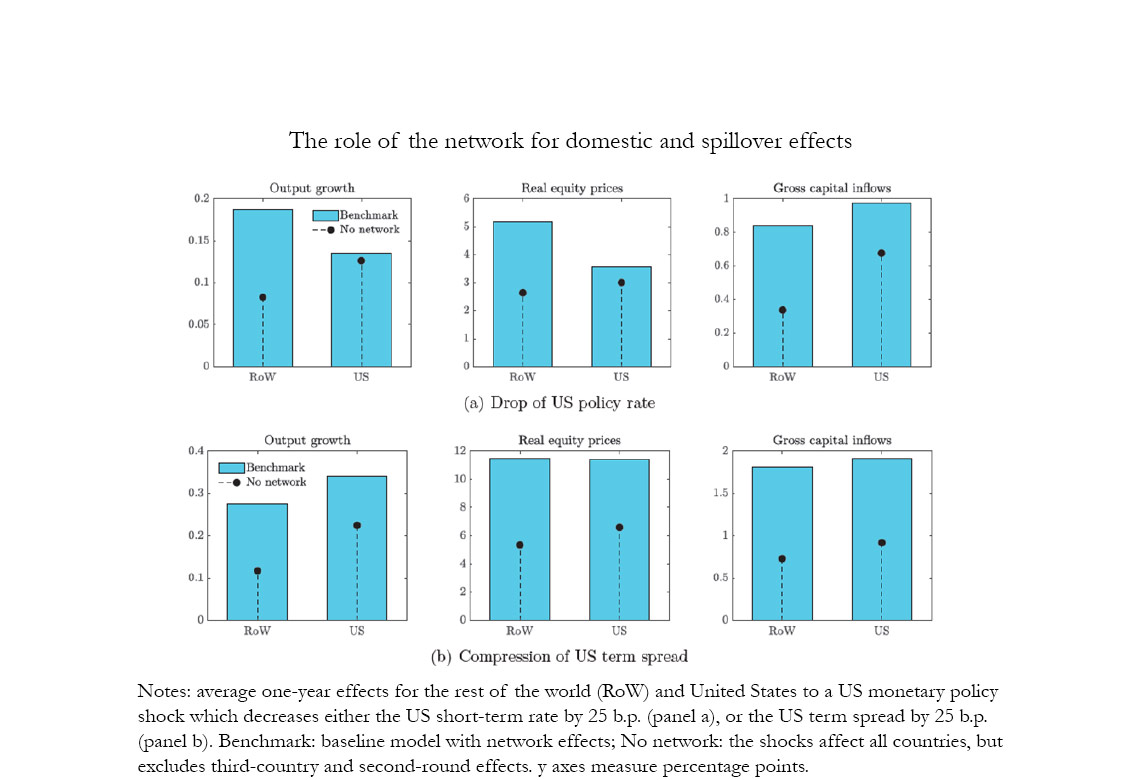 The literature has traditionally emphasized that economies with a flexible exchange rate regime are more insulated than those which constrain their monetary policy to pegging their exchange rate to a reference currency. This reflects the classical Mundellian Trilemma according to which a country can attain just two of three objectives among exchange rate stability, free capital mobility, and independent monetary policy. The Trilemma has been recently put into question, as a US monetary policy shock is found to trigger an extraordinarily high comovement in international financial variables — a Global Financial Cycle — which affects the monetary conditions of any economy regardless of its exchange rate regime.

This paper aims at quantifying the effects of US monetary policy shocks on the rest of the world. In particular, it measures to what extent the role of US monetary policy in driving the Global Financial Cycle gets amplified by the complex network of cross-country interactions that arise in a highly integrated global economy. We tackle this question by assessing the international spillovers of US monetary policy with an estimated global VAR (GVAR), a multi-country empirical framework which models the global economy as a network of interdependent countries which account altogether for more than 90% of world GDP. Each economy in the GVAR is represented by a VAR model that includes both domestic and economy-specific external variables, where the latter are meant to reflect the relative importance of the other countries for the given economy. By allowing for heterogeneity across economies we can obtain the full distribution of country-specific spillover effects rather than a single point for the aggregate.

The model allows to investigate whether the effects of US monetary policy shocks get amplified by the complex network of interactions among receiver countries, as well as by spillback effects from countries in the rest of the world to the US. We identify US monetary policy shocks using theory-based sign restrictions on selected responses of US variables, while at the same time leaving unrestricted the responses of all variables in the rest of countries so to allow for an agnostic identification strategy about the size and sign of international spillovers. We explicitly consider both conventional and unconventional monetary policy measures, so to provide a comprehensive picture of US monetary policy actions.

We show that unexpected expansionary US monetary policy surprises contribute to the emergence of a Global Financial Cycle that boosts macroeconomic activity worldwide, regardless of whether the monetary easing is achieved by a conventional drop in the policy rate or by a compression of the yield spread. Importantly, macro-financial spillovers are economically and statistically significant even in economies with floating exchange rate regimes and, if anything, having a flexible exchange rate provides just a partial insulation to foreign shocks.

Our results are consistent with the idea that shifts in monetary policy of the hegemon economy, the United States, generate a global synchronization of financial variables which affects all countries altogether. Importantly though, we also show that the role- of US monetary policy in driving these macro-financial spillovers gets even reinforced by network effects, which roughly double the direct impacts of US monetary policy surprises on international equity prices, capital flows, and global growth. We also document that this amplification increases as countries get more globally integrated over time, suggesting that the evolution of the network is an important driver of the increasing role of US monetary policy in shaping the Global Financial Cycle.

publication
Working Paper Series no. 744: The Global Financial Cycle and US Monetary Policy in an Interconnected World
Download (EN)