In June 2018, the People’s Bank of China (PBoC) decided to include green financial bonds into the pool of assets eligible as collateral for its Medium Term Lending Facility. The PBoC also gave green financial bonds a “first-among-equals” status. We measure the impact of the policy on the yield spread between green and non-green bonds. We show that pre-reform trends are minor, meaning that both green and non-green bonds yields evolved similarily at the time of the reform. Using a difference-in-differences approach, we show that the policy increased the spread by 46 basis points. Our approach differs from the literature in that we match bonds under review with non-green bonds with similar characteristics and issued by the same firm, which improves the relevance of firm fixed-effects. We also specifically investigate the impact on green bonds. The granularity of the data (daily) also allows us to conduct a dynamic analysis by dividing the sample into weekly, monthly and quarterly observations. Our results also show that the impact of the reform starts to materialize after three weeks, has a maximum effect after three months, and has a persistent effect over six months. 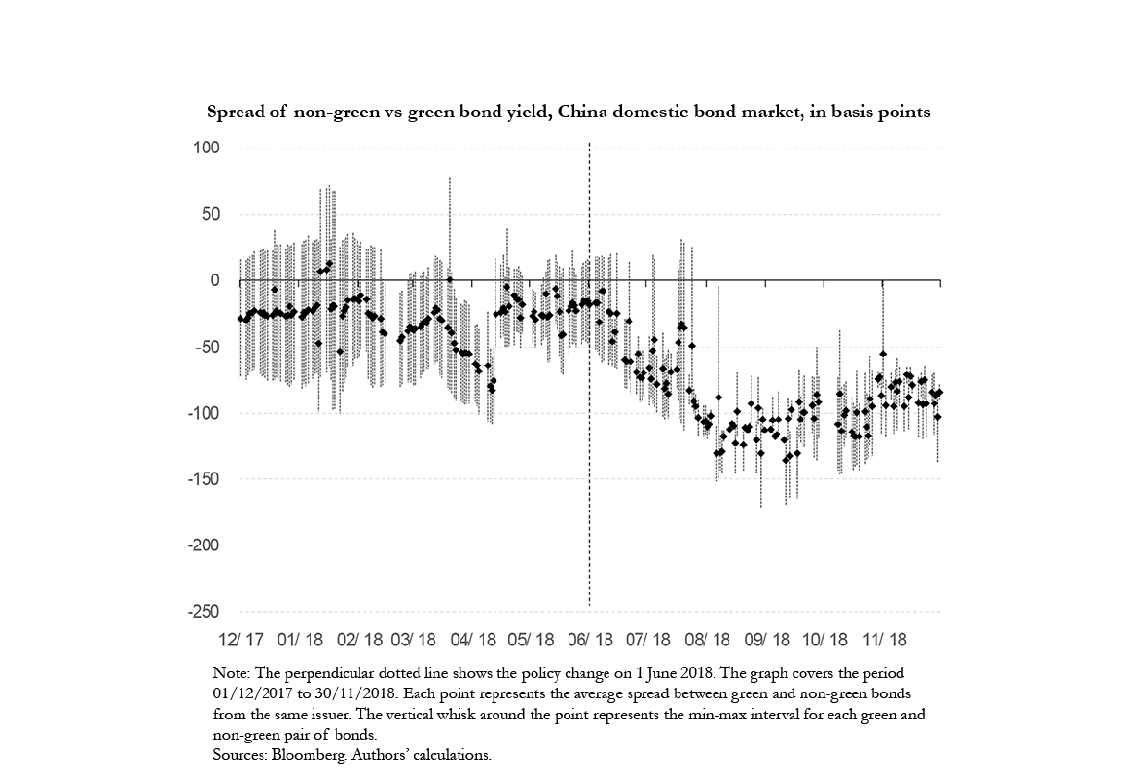 Central banks have begun to investigate the impact of climate change on the stability of the financial system. They have also started to find possible ways to reduce the carbon intensity of their portfolio and support low-carbon initiatives. One way monetary policy can support a transition towards a greener economy is through lending facilities. With these facilities, central banks supply loans to financial institutions in exchange for securities as collateral. Adding a security in the list of eligible collateral can affect its price, and in turn affect the real economy.
On June 1, 2018, the People’s Bank of China (PBoC) broadened the asset classes accepted as collateral for its Medium Term Lending Facility (MLF) to include financial bonds, in particular, green bonds. The PBoC also gave green bonds priority over other financial bonds (a first-among-equals status), although exact operating modes were not disclosed. We study the impact of this policy on the yield differential between green and non-green bonds.
We compare green financial bonds with other financial bonds issued by the same firm. This means that our identification process focuses on analyzing green and non-green bonds with similar characteristics, except for their green status. We measure the spread between green and non-green bonds’ yields before and after the reform. We show that the 2018 reform led to an increase of the spread by 46 basis points. Our results also show that the impact of the reform starts to materialize after three weeks, has a maximum effect after three months, and has a persistent effect over six months.