Rue de la Banque no. 57: The impact of Chinese import competition on the local structure of employment and wages in France

How has competition from Chinese exports affected the French labour market? This article aims to answer this question by exploiting the variation in exposure to competition from China across employment zones. The results suggest that around 13% of the decline in manufacturing employment in France from 2001 to 2007 is due to Chinese competition. The adverse effect on hourly wages is uniform along the wage distribution in the manufacturing sector, and concentrated in the middle of the distribution in the other sectors. The impact on the lowest wages is small, probably as a result of the lower limit set by the statutory minimum wage. The estimated impacts, albeit negative, do not necessarily imply that trade with China has not been generally beneficial.
An assessment in terms of welfare would require the measurement of gains to consumers and firms that use imported intermediate goods – and whose productivity gains also ultimately benefit consumers. 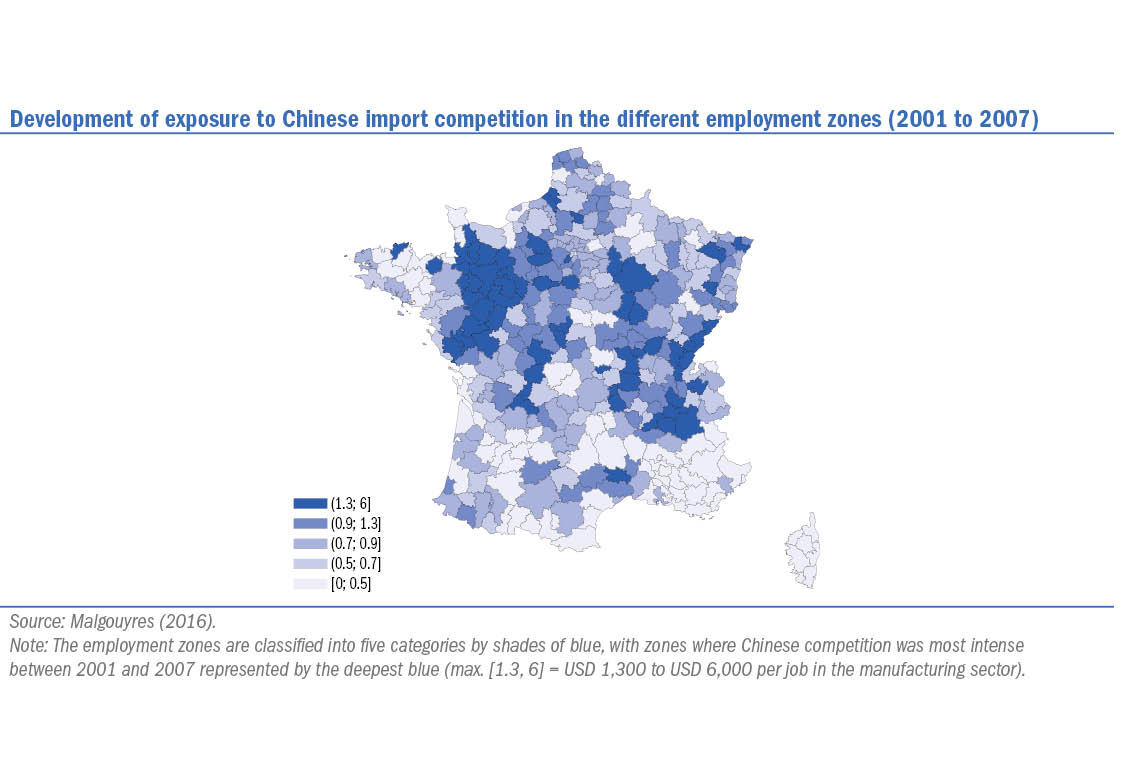 The emergence of China as an industrial and trading power

The impact of heightened import competition from low‑wage countries on manufacturing sector employment and wage inequalities is subject to intense debate in developed countries; and China is a key player among emerging countries. In the space of a decade (1998‑2008), it increased its share of global exports from 3.3% to 9.5%. Chart 1 shows France’s imports and balance of trade vis‑à‑vis China and a range of low‑cost countries. The particular nature of trade relations between France and China not only results from the high growth rate of Chinese exports to France (see Chart 1a) but also from a substantial deficit in France’s balance of trade (see Chart 1b).

Assessing the local impacts of a global shock

The aim of this Rue de la Banque, which is derived from Malgouyres (2016), is to estimate the effect of the huge surge in Chinese import competition on the local structure of employment and wage inequalities in employment zones in France. It follows the same empirical strategy as that applied by Autor et al. (2013) but also draws on the wealth of French data to assess the impact of this shock not only on employment and the average wage but also the impact along the wage distributions and on the type of jobs affected.

publication
Rue de la Banque no. 57: The impact of Chinese import competition on the local structure of employment and wages in France
Download (EN)