Working Paper Series no. 678: The Impact of Exports on Innovation: Theory and Evidence

Philippe Aghion, Antonin Bergeaud, Matthieu Lequien and Marc J. Melitz investigate the effect of export shocks on innovation. On the one hand a positive shock increases market size and therefore innovation incentives for all firms. On the other hand it increases competition as more firms enter the export market. This in turn reduces profits and therefore innovation incentives particularly for firms with low productivity. Overall the positive impact of the export shock on innovation is magnified for high productivity firms, whereas it may negatively affect innovation in low productivity firms. The authors test this prediction with patent, customs and production data covering all French manufacturing firms. To address potential endogeneity issues, they construct firm-level export proxies which respond to aggregate conditions in a firm's export destinations but are exogenous to firm-level decisions. They show that patenting robustly increases more with export demand for initially more productive firms. This effect is reversed for the least productive firms as the negative competition effect dominates. 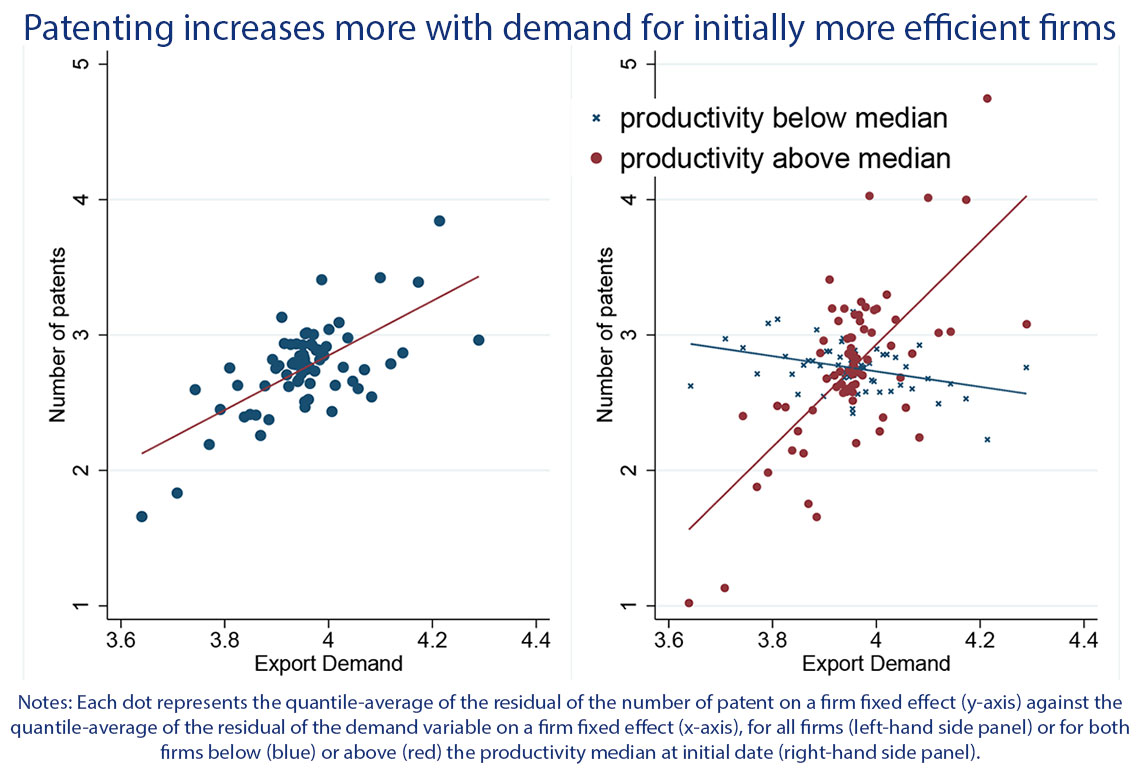 We combine modeling insights from the literature on firm heterogeneity and trade into the new growth theory. The former literature has focused on the causality link from productivity to trade whereas the latter literature has focused on the reverse link from trade to productivity by investigating the various channels whereby trade liberalization affects innovation-led productivity growth across firms. Our model derives testable predictions on how firms' access to export markets affects innovation; and how this link will vary across exporters. We then take advantage of the availability of exhaustive firm-level data on productivity, trade, and patenting in France to test these predictions.

The main insight from the model is that export has two impacts on firm’s innovation response: a market size effect and a competition effect. Think of French firms that export to China. An increase in Chinese demand for products produced by these firms will first have a direct market size effect: namely, the expanded market for exports will increase the size of innovation rents and thereby increase those firms' incentives to invest more in innovation. But it will also have a competition effect: namely, the expanded market for exports will attract new firms into the Chinese market as more firms find it profitable to sell there their product; this in turn will raise competition for exporters into that market. Due to the nature of competition between firms in the model this effect dissipates the larger is the firm's productivity. This competition effect is therefore most salient for French firms with initially lower market shares and higher production costs (these firms will suffer more than -or at the expense of- more efficient exporting firms). Hence our prediction that a positive export shock should raise innovation more in more frontier firms; and that it may induce less innovation for those firms that are far from the frontier.

To test this prediction, we use three exhaustive datasets on French firms: patenting, production, and customs data. To disentangle the direction of causality between innovation and export performance, we construct a firm-level export demand variable following Mayer et al. (2016). This variable responds to aggregate conditions in a firm's export destinations but is exogenous to firm-level decisions (including the concurrent decisions for export-market participation and the forward looking innovation response). We show that: (i) firms that are initially more productive (closer to their sector's technology frontier) strongly respond to a positive export demand shock by patenting more; (ii) this effect dissipates for firms further from the “frontier” and is reversed for a subset of initially less productive firms (see Figure). These results confirm the predictions of the model for both a market size and a competition effect of the export shock. They are robust to (i) considering other patent indicators; (ii) controlling for firm specific characteristics; (iii) excluding dominant firms in a destination market; (iv) considering alternative measures and heterogeneous effects for a firm's proximity to frontier; and (v) controlling for pre-trends with sector-decile specific time trends. We also show that the competition effect is most salient in high competition export destinations. Finally we obtain similar results with an alternate specification based on long time-differences.

publication
Working Paper Series no. 678: The Impact of Exports on Innovation: Theory and Evidence
Download (EN)