Working Paper Series no. 636: The Interest of Being Eligible

Major central banks often accept pooled individual corporate loans as collateral in their refinancing operations with credit institutions. Such ''eligible'' loans to firms therefore provide a liquidity advantage to the banks that originate them. Banks may in turn pass on this advantage to the borrowers in the form of a reduced liquidity risk premium: the eligibility discount. We exploit a temporary surprise extension of the Eurosystem's universe of eligible collateral to medium-quality corporate loans, the Additional Credit Claims (ACC) program of February 2012, to assess the eligibility discount to corporate loans spreads in France. We find that becoming eligible to the Eurosystem's collateral framework translates into a reduction in rates by 7bp for new loans issued to ACC-firms, controlling for loan-, firm- and bank-level characteristics. In line with the opportunity-cost view of collateral choice, we also find evidence that this collateral channel of monetary policy is only active for banks which ex ante pledged more credit claims as part of their collateral with the Eurosystem * 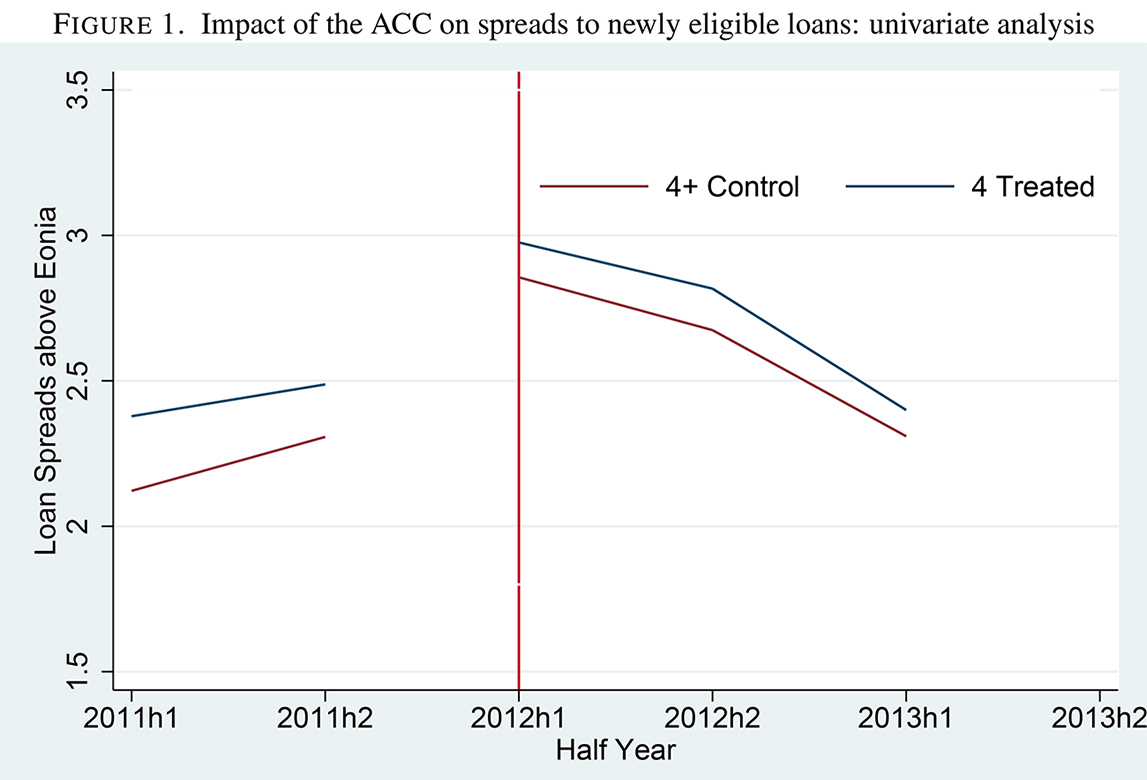 In this paper, we investigate the effect of a change in the eligibility criteria of the Eurosystem's collateral framework on the cost of credit for French firms during a time of financial stress. We exploit the Eurosystem's Additional Credit Claims (ACC) program of the winter 2011-2012 as a quasi-natural experiment. The ACC program consisted of an unexpected extension of the Eurosystem's collateral framework to medium-quality corporate loans. It was announced at the height of the euro area sovereign crisis, in December 2011, and was swiftly implemented in February 2012, along with the second round of the Eurosystem's 3-year longer term refinancing operations (LTROs). Using a rich dataset of newly issued loans to a large sample of French firms, including a majority of small, non-listed firms, we measure the reduction in loan spreads (relative to the short-term risk free rate) for newly eligible firms that is associated with the implementation of the program.

From a theoretical perspective, it is not clear what ought to be the effect of such a program on loan rates. On the one hand, if liquidity premia are driven by the amount of available liquidity, such as treasuries, in the financial system, then the ACC program by increasing the aggregate supply of liquidity ought to imply a reduction in rates for all loans. On the other hand, collateral eligibility may imply an asset specific effect due to a higher demand for pledgeable assets. In this case, two assets with identical future cash flows but which differ in their pledgeability may face different demand curves. As a consequence, one may expect that such loans command a smaller compensation for liquidity risk (on top of any remaining credit risk premium) than other loans, notably in times of financial stress. We label here this specific reduction in the liquidity risk premium the eligibility discount.

Our empirical set-up uses a difference-in-difference regression, whereby we identify the eligibility discount in times of financial stress by comparing the loan spreads to firms which are newly eligible thanks to the ACC program (which we denote 4-rated firms according to their Banque de France rating, cf. the “4 Treated” line in Figure 1 above), with the spreads to firms of close but superior quality which were already eligible (which we denote 4+-rated firms, cf. the “4+ Control” line in Figure 1), both before and after the implementation of the measure. Although several other policy measures were also implemented over the winter of 2011-2012, the ACC-program is the only one that specifically targets 4-rated firms and not firms with other credit ratings. By focusing only on the differential effect of loans becoming eligible, our identification strategy differences out any common effect on the liquidity premium for all loans due to the increase in collateral availability for banks, and captures therefore the asset specific effect which is due to loans being eligible as central bank collateral. We do not claim therefore to capture the only effect of the ACC program, and our results can be viewed then as a lower bound of the overall effect.

We find that the extension of collateral eligibility to medium-quality, corporate loans by the Eurosystem has induced on average an eligibility discount of some 7 bp on spreads to targeted loans. Although small in absolute terms, this amounts to a third of the unconditional pre-policy average spread between treated and control loans as shown in Figure 1 above, and about a half of the conditional spread (conditional to all controls). We also find that the transmission to borrowers of an eligibility discount due to the liquidity advantage granted by the ACC program is concentrated in the set of banks which ex ante pledged higher levels of high quality credit claims as part of their central bank refinancing, which vindicates an opportunity cost view of collateral choice. We then check for a confirmation of the hypothesis of a positive bank credit supply shock due to the enhanced liquidity of loans to ACC-treated firms by also looking at the volumes lent by the same banks to 4+- and 4-rated firms. Our results clearly point to an increased supply of credit over the year 2012 to the newly eligible 4-rated firms by those banks which are both active corporate lenders and active direct Eurosystem borrowers. Overall, our results are supportive of an active collateral channel of monetary policy transmission which can strengthen the bank lending channel when the central bank's policy rate hits its zero lower bound (ZLB).

* Working Papers reflect the opinions of the authors and do not necessarily express the views of the Banque de France. This document is available on publications.banque-france.fr/en

publication
Working Paper Series no. 636: The Interest of Being Eligible
Download (EN)