In this paper Julia Schmidt, Marianna Caccavaio, Luisa Carpinelli and Giuseppe Marinelli provide empirical evidence on the impact of US and UK monetary policy changes on credit supply of banks operating in Italy and France over the period 2000-2015, exploring the existence of an international bank lending channel. Exploiting bank balance sheet heterogeneity, they find that monetary policy tightening abroad leads to a reduction of credit supply at home, in particular for US monetary policy changes. Their results show that USD funding plays an important role in the transmission mechanism, especially for French banks which rely to a larger extent on USD funding. They also show that banks adjust their euro and foreign currency lending differently, thus implying that funding sources in different currencies are not perfect substitutes. This is especially the case when tensions in currency swap markets are high, thus resulting in costly cross-currency funding. 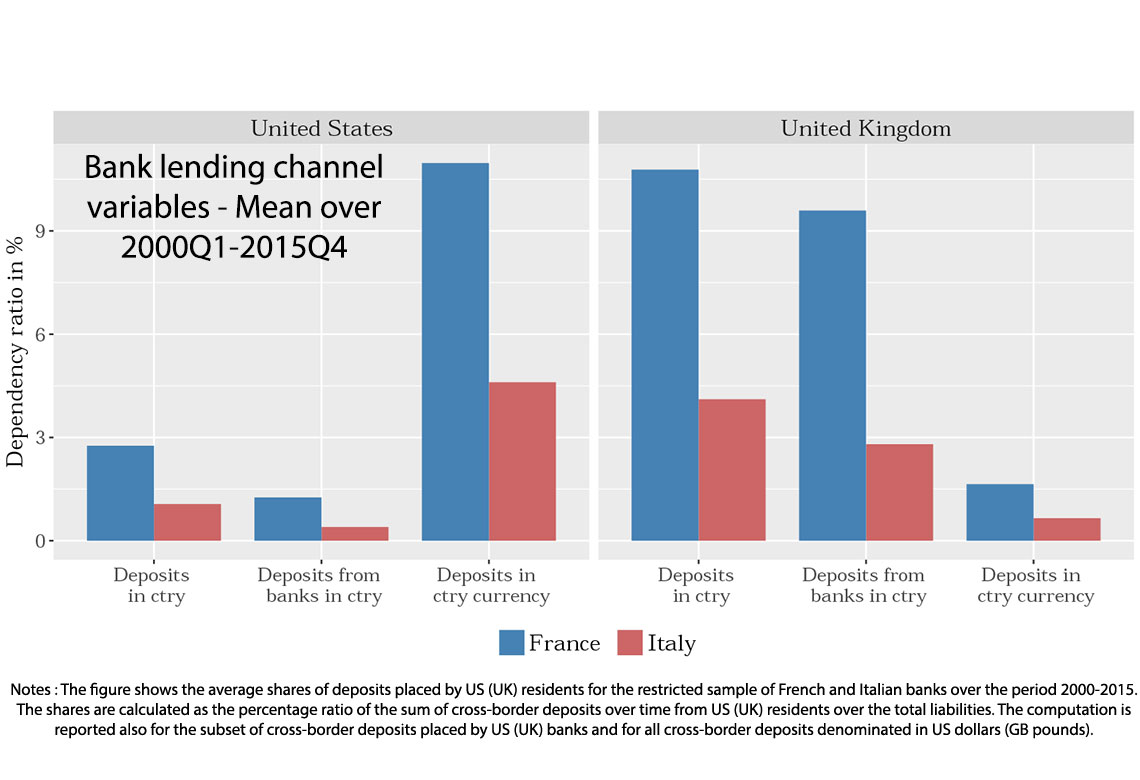 Monetary policy transmission to the real economy operates via various channels. One of these channels is the so-called “bank lending channel” which has been extensively studied in a domestic context. This transmission channel is specific to banks and their willingness to supply loans in response to a monetary policy change. At the same time, banks have also been identified as an important source of the international transmission of financial and real shocks, both through cross-border activities and through operations between the affiliates of globally operating banking groups. We therefore ask in this paper whether there is an international version of the bank lending channel.

How does the bank lending channel in its traditional version work? Let us consider the case of a US monetary policy tightening. Through open market operations, the US Fed sells short-term government securities in exchange for US dollars. Thus, buyers of government securities will withdraw deposits from the banking system in order to pay for the securities they purchased from the Fed. The bank lending channel, which operates on top of other transmission channels such as the interest rate channel, postulates that the drop in deposits forces banks to resort to alternative sources of financing. However, if these are limited, banks will adjust the asset side of their balance sheet, i.e. via a reduction in loan supply.

In its international version, this bank lending channel works through the exposure of French and Italian banks in terms of funding from US sources. US monetary policy tightening leads to a contraction of deposit funding for US resident banks. As a consequence, US resident banks that are not able to tap on alternative sources of funding will respond to US monetary policy tightening by reducing their cross-border loans to banks in France and Italy; this, in turn represents a funding shock for French and Italian banks, and it affects them depending on how much they rely on foreign funding from these sources.

Contrasting the experiences of France and Italy, we observe two countries within the Euro area where the international transmission of monetary policy through banks is quite different. Ex ante, the banking systems of these countries are similar in size and business model, yet they differ in the composition of funding sources and the currency composition of their funding as well as of loans granted. As shown in the below figure, French banks rely to larger extent on foreign funding, especially in USD.

We find evidence of an international bank lending channel of transmission of US monetary policy for loans to French and Italian residents over the period 2000-2015: in both countries, when US monetary policy tightens, banks that relied more intensely on US sources of funding reduced the lending to the private non-financial sector. The breakdown by currency shows that in the case of Italy the effect was concentrated on loans in EUR whereas French banks reduced their USD lending. Also, the impact is larger for French banks that relied more heavily on USD funding markets and that obtained substantial amounts of USD funds through their affiliate network in the US. Tensions in currency swap markets in recent years have exacerbated this effect. Our results are consistent with the hypothesis that funding in one currency is not a perfect substitute for funding in another currency, especially in the case of the USD.