This paper shows that job polarization has a persistent negative effect on employment opportunities, labor mobility and skill-to-job match quality for mid/low-skilled workers, in particular during downturns. I introduce a model generating an endogenous mapping between skills and jobs, that I estimate to match solely occupational dynamics during the Great Recession, a major episode of polarization in the US economy. Yet, this is sufficient for the model to replicate well the reallocation patterns of all workers on the job ladder and the mismatch dynamics observed in the data. Comparison with the planner solution reveals that 1/4 of mismatches is efficient and attenuates polarization and unemployment over the cycle. 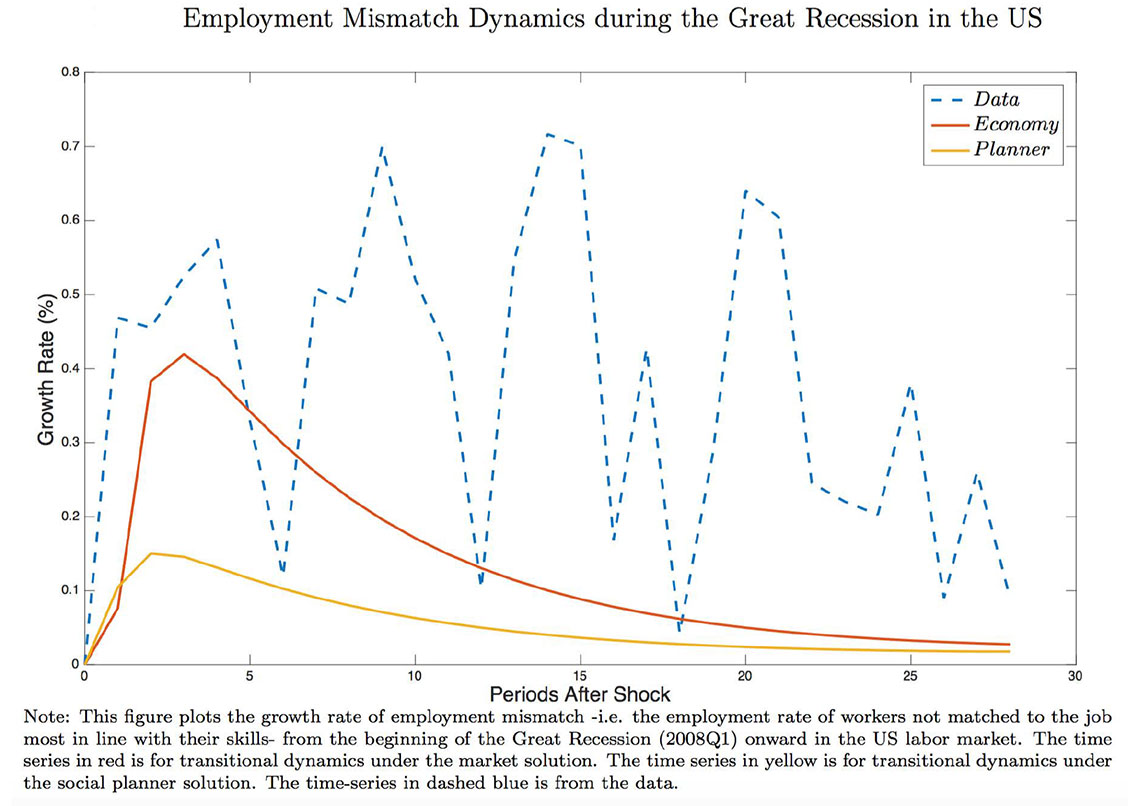 Job polarization is a well-known feature of the U.S. labor market: routine jobs have been disappearing in the long-run and job destruction is mostly concentrated in routine occupations during downturns. Yet, little is known about the effects of job polarization on the reallocation of skills across jobs and on the demand for skills across jobs. In other words, we do not know much about how skill-heterogeneous agents use the job ladder when the market polarizes, what job opportunities they have, and which skills employers are looking for in this context. This paper aims to fill the gap in the literature.

By exploiting a quantitative model replicating the long and short-run dynamics of job polarization in the US from 2005 onwards, this paper shows that this phenomenon and the business cycle interact and have heterogeneous effects on high and low-skilled workers, on their labor mobility and employability, and on the quality of skill-to-job matches formed on the labor market. In fact, the model gives avidence that the disappearance of routine jobs during the Great Recession (GR) triggered large movements from the top to the bottom of the job ladder. Workers -despite their education and experience- moved down the ladder and accepted lower paying and lower qualifying jobs. However, the dynamics of mismatch between skills and occupations is very different across workers. For example, high-skilled workers tend to move down the ladder -mostly from abstract to routine job- only during the downturn, but they climb up the ladder again once the economy recovers. In other words, they use the job ladder in a procyclical fashion, and their mobility and skill-to-job match quality is only temporarily compromised. This is not true for low-skilled workers. In fact they move down the ladder -from routine to manual jobs- but they do not climb it up afterwards. This happens because the downturn permanently destroys routine occupations, thus reducing dramatically the job opportunities of these workers. At the same time, their low level of skills prevent them to upgrade to top jobs in the next expansion. Consequently, also their labor mobility is permanently compromised. These downgrades generate wage-losses over the life cycle that are small and temporary for high-skilled workers, but large and extremely persistent for low-skilled workers. In fact, high-skilled workers benefit from wage compression when moving down the ladder such that their wage-loss results bounded. Conversely, the more a low-skilled workers move down the ladder the larger the wage-loss will be. Altogether these results shed light on inequality in labor mobility, job opportunities and wages in the context of job polarization.

The paper also shows how a social planner would optimally manage the allocation of skills both in the long-run and over the cycle in the context of job polarization. In the long-run, the efficient allocation of skills would be such that no skill-to-job mismatch occurs and polarization accelerates. In fact, it would be efficient for the economy to relocate workers from the shrinking and low-productivity routine market to other markets as fast as possible. However, during downturns, the interaction between polarization and the business cycle generates huge welfare losses due to routine job destruction and higher and more persistent unemployment. In this case, the social planner would operate to protect more routine workers and would tolerate some skill mismatch if helpful to keep more routine jobs alive.