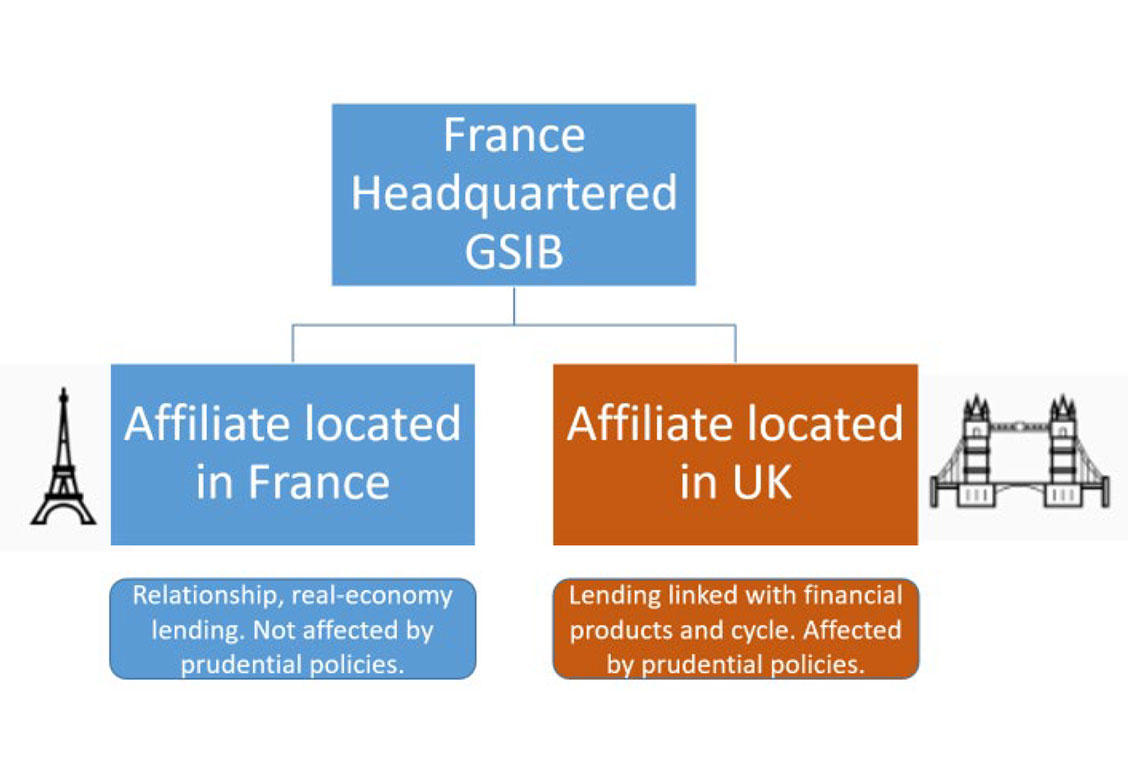 By combining the analysis of two unique confidential datasets, we examine how euro area (EA) monetary policy and recipient-country prudential policy interact to influence the cross-border lending of French banks from France and the UK. Unanticipated monetary policy shocks in a centre economy such as the EA are likely to lead to shifts in cross-border flows that could amplify or offset financial conditions abroad. International financial centres, such as the UK, are used to obtain, channel and optimise funding for large international banking groups – in particular those headquartered in continental Europe – implying that a share of those cross-border flows are likely to transit through them.

Benefiting from the granularity of our dataset, we then explore heterogeneities in that interaction, specifically the difference made by bank size and location of the affiliate (French headquarters vs. affiliates based in the UK, an international financial centre). For large French banking groups (GSIBs), the response of lending made from their French headquarters to EA monetary policy is not responsive to recipient-country prudential policies. In contrast, lending made by their affiliates located in London, a financial centre, does significantly respond to prudential policy in the final-destination country conditional on EA monetary policy. Conditioning on the effects of EA monetary policy, we then find that the cross-border lending of French GSIBs from France and from the UK is differently affected by recipient-country prudential policy, suggesting that the two entities engage in different types of lending. The opposite pattern stands for non-GSIBs: the response of their lending made from their French HQ to EA monetary policy is sensitive to recipient-country prudential policy.

We finally find evidence that French GSIBs channel funds towards the UK in response to EA monetary policy, in a manner that is dampened by the global prudential policy setting.

Together, these findings suggest the existence of a two-arched ‘London Bridge’: conditional on EA monetary policy, French GSIBs adjust their funds in the UK in response to global prudential policies – first arch – and, from there, lend to third-party countries, responding to local prudential policies – second arch. Finally, we find evidence of a similar pattern – regarding the second arch – for all EA-owned bank affiliates in the UK, suggesting a broader relevance of the London Bridge.