Working Paper Series no. 637: MAPI: Model for Analysis and Projection of Inflation in France

In this paper, we present the new model developed at Banque de France to forecast the Harmonized Index of Consumer Prices (HICP) and its components in France up to twelve quarters during the Eurosystem projection exercises. The model is a partial equilibrium model and is used for forecast purposes jointly with the macroeconomic model Mascotte. The model generates more accurate forecasts, conditional to Eurosystem common technical assumptions, than pure autoregressive models. We derive impacts of oil-price shock, exchange rate and wage shocks on headline and core HICP and find significant pass-through. 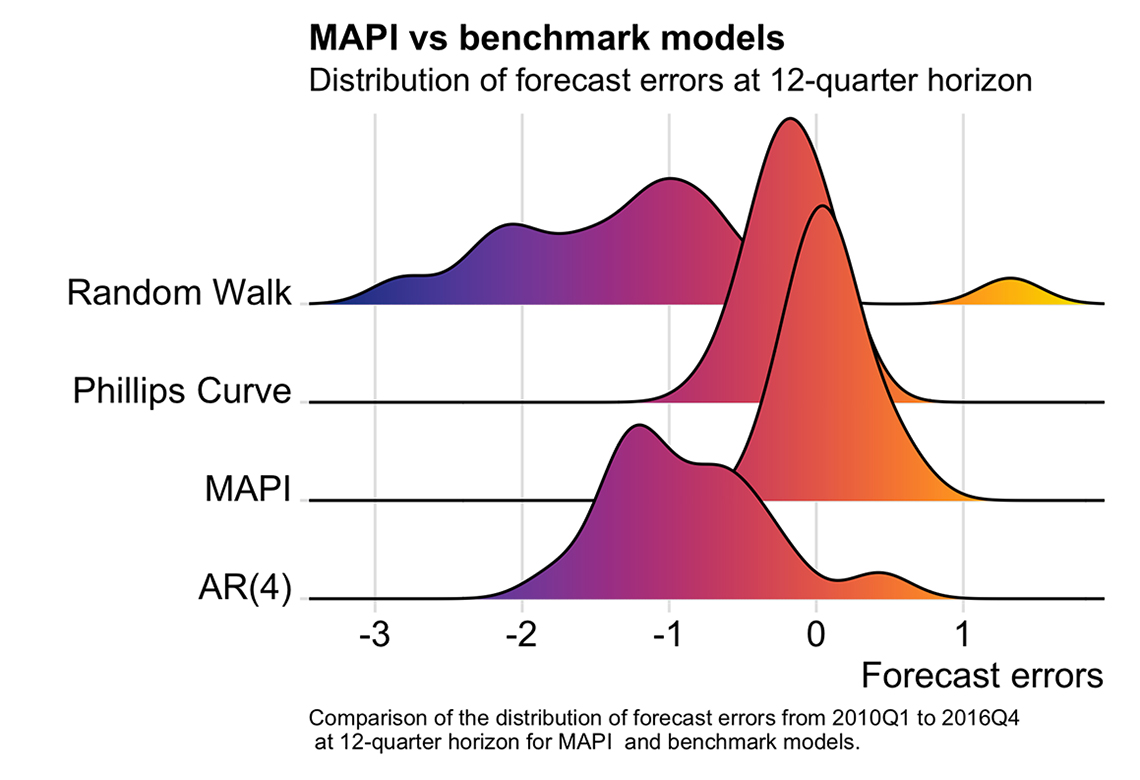 This paper documents the new Model for the Analysis and Projection of Inflation in France (MAPI).  MAPI is the model used to forecast inflation in France during the Eurosystem projections exercise since December 2016 (https://www.banque-france.fr/en/economics/macroeconomic-forecasts-france). It is used for both short-term horizon forecasts during the Narrow Inflation Projection Exercise (NIPE) and medium-term horizon forecasts during Broad Macroeconomic Projection Exercise (BMPE), in interaction with the workhorse macroeconomic model Mascotte.

We show that the model produces better forecasts than three benchmark models, a Phillips curve, an AR(4) and a random walk at the three different horizons, as illustrated by the figure below for the 12 quarters horizon.

The paper also describes the transmission of shocks into HICP at its subcomponents, focusing on 4 standardized shocks: a shock on the national exchange rate, a shock on the euro dollar exchange rate, a shock on the price of crude oil and a shock in wage. Our simulations show that the transmission of shocks among the components of HICP. While our simulations evidence strong direct effects, notably for oil and euro dollar exchange rate, indirect effects are much more faded and diffuse slowly to components of HICP. Of course, given its partial equilibrium nature, MAPI has to be used as a complement to a full macroeconomic model such as Mascotte to get a complete simulation of the impact of the shocks on the French economy.