French GDP growth should be stronger than predicted in the December publication, at 1.9% in 2018. It should then remain above its current potential rate, at 1.7% in 2019 and 1.6% in 2020. Growth in domestic demand should only slow slightly between 2018 and 2020, as increases in earned income and cuts to direct taxes and social security contributions help to drive sustained growth in household consumption. Total investment is expected to remain a significant contributor to output growth, and its composition should be more balanced than in recent years. External trade should no longer contribute negatively to growth owing to the sharp export rebound projected for 2018. Export growth should subsequently decelerate in 2019-20 as the international environment becomes less favourable (lagged impact of the recent appreciation of the euro, less dynamic global demand).

Inflation as measured by the harmonised index of consumer prices (HICP) is expected to rise sharply in 2018, averaging 1.6% after 1.2% in 2017, fuelled in particular by higher energy prices and hikes in tobacco taxes. It should then fluctuate to an extent, falling to 1.4% in 2019 before rising again in 2020 to 1.8%. Inflation excluding energy and food is projected to remain weak in 2018, as is the rise in the GDP deflator, but both should strengthen fairly markedly over the rest of the projection horizon, supported by the drop in unemployment. 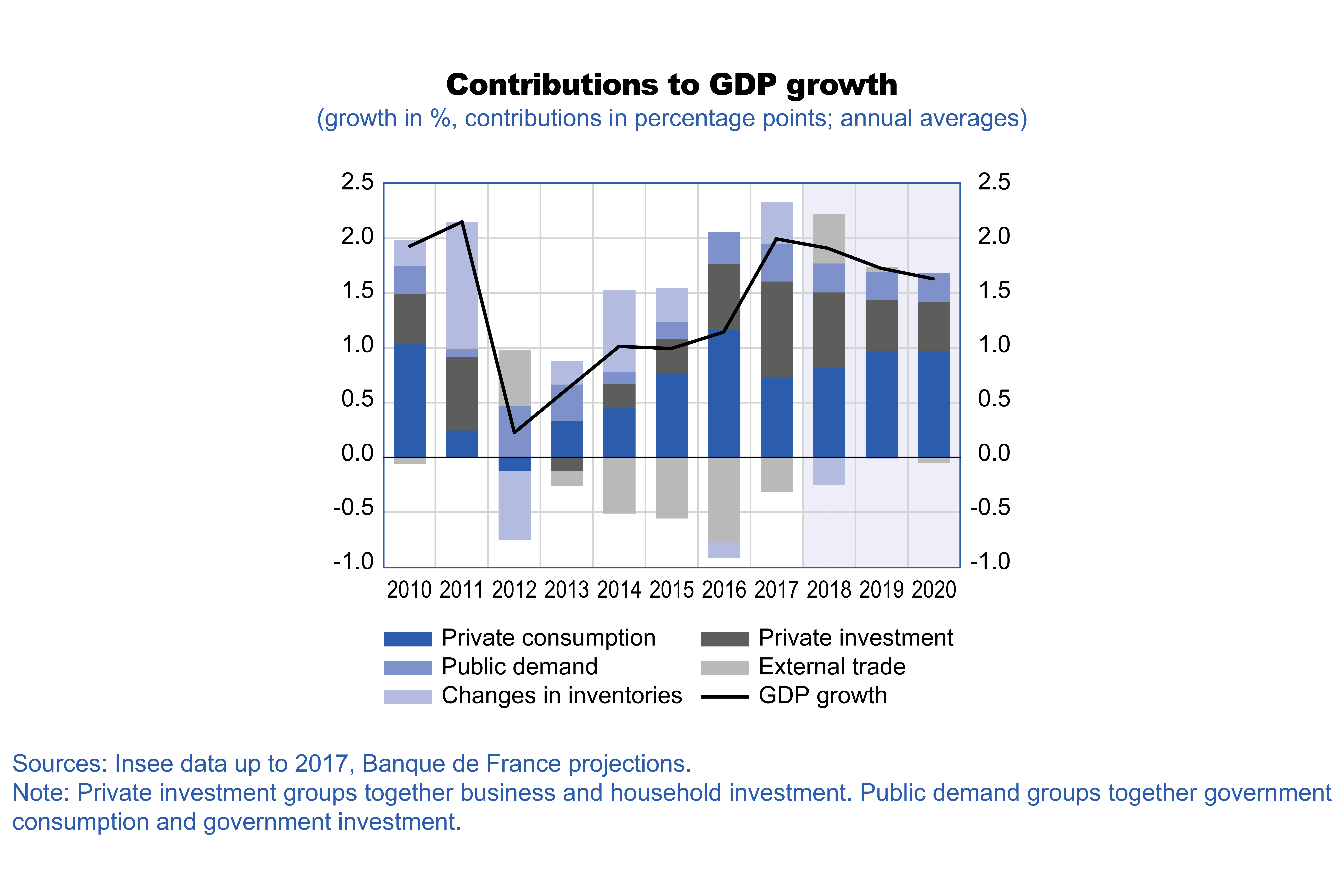 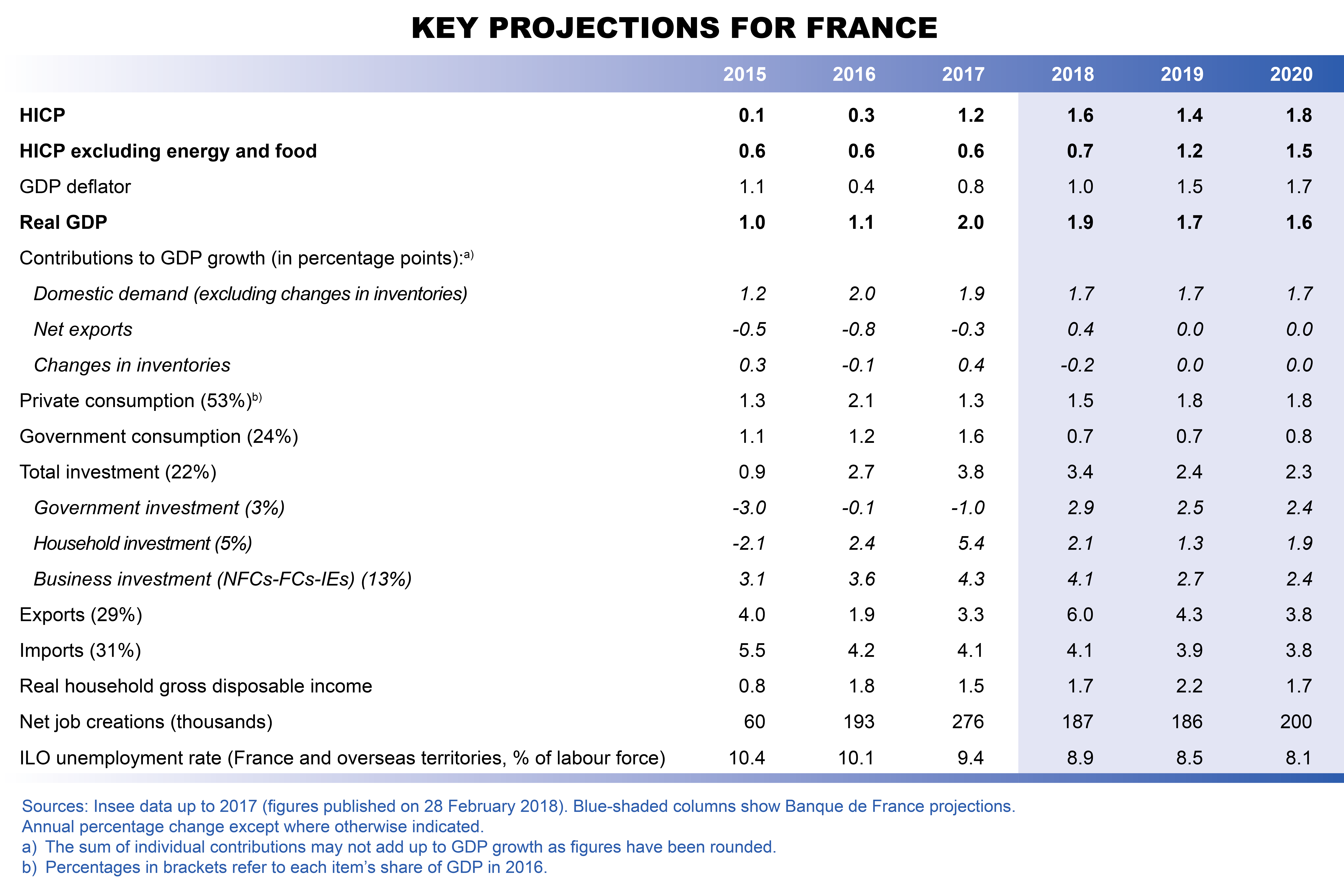 After accelerating significantly in 2017 (growth of 2.0% after 1.1% in 2016), economic activity should continue to rise at a similar robust pace in 2018 (growth of 1.9%). This annual average projection for 2018 reflects the past surge in momentum, as seen in the high carry-over effect at end-2017 (0.9 percentage point), followed by an anticipated moderation, as suggested by the recent easing in economic survey results after the strong readings for 2017. In view of the recent surveys, quarterly GDP growth is seen slowing slightly at the start of 2018, to around 0.4%.

For the full year 2018, domestic demand is projected to make a marginally smaller contribution to GDP growth than in 2017. However, data available up to end-2017 suggest export growth should rebound markedly in 2018 after several disappointing years, resulting in a strong positive contribution from external trade.

In 2019 and 2020, economic activity should continue to grow at an above-potential rate

Growth is expected to stabilise at around 1.6%-1.7% per year in 2019-20, which is well above the current estimate for potential growth (1.3-1.4% per year) over the projection horizon. Consequently, the output gap is expected to close in 2019.

These projections were finalised on 9 March 2018, and are based on the MIBA (Monthly Index of Business Activity) estimate for the first quarter of 2018 published at the start of March and the national quarterly accounts published by Insee on 28 February 2018. They also incorporate the technical assumptions used in the Eurosystem projection exercise for March (see table A2 in the appendix), for which the cut-off date is 14 February 2018. Since the Banque de France last published its projections in December 2017, its assessment of the measures introduced under the recent budget laws has remained more or less unchanged. For 2019 and 2020, however, the recent reforms and the direction of economic policy over the forthcoming years could all have an additional positive impact on growth.

Revisions since December: stronger momentum in the short term

Since the December 2017 publication, the 2018 growth projection has been revised upwards by 0.2 percentage point. This reflects a larger positive carry-over effect at the end of 2017, as well as a modest improvement in the outlook for the first half of 2018. GDP growth was stronger than expected in the fourth quarter of 2017, at 0.6% compared with a previous projection of 0.5%. This pushed the annual average growth rate up to 2.0% for 2017 (compared with December’s projection of 1.8%), and took the year-end carry-over effect up to 0.9 percentage point (a rise of 0.1 percentage point). The continued strength of economic survey results suggests that growth could slightly exceed December’s expectations at the start of 2018, despite slowing relative to end-2017. However, the sharper appreciation of the euro since December means the international environment is slightly less favourable than predicted in the last publication, leading to a small downward revision to GDP growth for 2019.

More balanced engines of growth: a rebound in exports in 2018 and dynamic domestic demand over the entire projection horizon

French economic growth should prove more balanced over the projection horizon than in 2016-17 (see Chart 1).

Domestic demand is expected to remain dynamic. Growth in household consumption should accelerate somewhat, buoyed by a rise in earnings linked to robust employment and a pick-up in wages. The tax measures set out in the recent budget laws should also help to boost household income from the end of 2018. However, part of these gains is expected to be diverted into savings, leading to a rise in the saving ratio. Business investment should gradually lose momentum after the rapid growth seen in 2016 and 2017. Nevertheless, it should still rise at a much faster pace than GDP, spurred by strong economic activity and relatively low interest rates. Recent data on home sales and housing starts suggest that household investment growth should decelerate in 2018, stabilising at a pace more in line with household purchasing power.

External trade is expected to make a strong positive contribution to growth in 2018. As predicted in December, export growth accelerated markedly at the end of 2017 and the carry-over effect for 2018 is already high (2.8 percentage points). Exports should continue to be supported by dynamic global demand, although the latter is expected to decelerate progressively over the projection horizon. The effects of the euro appreciation since the summer of 2017 should also gradually make themselves felt. As a result, the contribution of external trade should turn neutral again in 2019 and 2020.

With regard to inventories, the carry-over effect at end-2017 suggests they should have a negative impact on GDP growth in 2018, after making a strong positive contribution in 2017 (and over the past few years, in average terms). They should then make a neutral contribution over the remainder of the projection horizon.

2017 was marked by significant employment gains, with the addition of 276,000 net new jobs. This trend should continue over the projection horizon, with between 180,000 and 200,000 net jobs expected to be added each year, despite the 2018 cut in subsidised contracts. In 2019 and 2020, market sector employment should be supported by the transformation of the CICE tax credit into a permanent cut in employer social security contributions. However, the employment gains should be slightly smaller than in previous years owing to the slowdown in economic activity. The unemployment rate is projected to fall steadily over the period, reaching 7.9% at end-2020, the lowest level observed since the end of 2008. The unemployment rate was much lower than expected in the fourth quarter of 2017, at 8.9% compared to December’s projection of 9.6%. As a result, assuming only a limited snapback at the start of 2018, the path of unemployment has been revised downwards for the entire projection horizon.

French inflation is seen fluctuating in 2018 and 2019, but should then strengthen markedly in 2020, rising towards 1.9% at the end of the year

HICP inflation is projected to accelerate sharply to 1.6% in 2018 (after 1.2% in 2017, see Chart 2), before dipping temporarily to 1.4% in 2019. The pick-up already observed in 2018 should be amplified by higher energy prices, including for gas and electricity, and by hikes in tobacco taxes. However, HICP inflation excluding energy and food should rise only marginally in 2018, averaging 0.7% after 0.6% in 2017. In 2019, in contrast, the fall in headline inflation should mask a gradual upturn in non-energy, non-food inflation (1.2% in 2019), linked to lower unemployment and somewhat higher wage growth. This trend should be confirmed in 2020 with inflation excluding energy and food rising to 1.5% and headline inflation to 1.8% in annual average terms.

Looking at the individual components of inflation, growth in industrial goods prices should remain contained in 2019, as the recent appreciation of the euro is expected to offset faster growth in employment and wages. Services price inflation is projected to remain weak in 2018, notably due to the cut in social housing rents expected in April. It should then increase again in 2019 and 2020 reflecting a slight acceleration in wage growth as unemployment declines.

This outlook remains subject to uncertainties, although the risks appear balanced

The risks to the projection for real GDP growth are deemed to be balanced. Although various factors suggest growth in private investment (households and businesses) hit a peak in 2017, the slowdown could come later and prove more limited than currently factored into our projections. The current and upcoming reforms could also raise potential growth before the end of our projection horizon. Conversely, the adjustment of exports to the euro appreciation and the uncertainties weighing over global demand all pose downside risks to growth. In addition, the slight decline in a number of economic indicators since January suggests growth could be slower than expected over the start of 2018.

As with GDP growth, the risks to our inflation projection appear on the whole balanced. In the short term, the projection takes into account the cut in social housing rents included in the budget law and due to take effect on 1 April 2018; however, the actual scale of this reduction remains uncertain. A larger than predicted upward correction in unemployment at the start of 2018 could lead to weaker than expected inflation for 2018. Conversely, the fall in oil prices currently implied by futures prices might never materialise, posing an upward risk to the inflation projection. Lastly, there is still some uncertainty as to the impact of the current labour market reforms on prices.