With the European debt crisis, the role of assets accepted by the Eurosystem as collateral for refinancing operations took on a new place in the public debate, as, against a backdrop of shifting demand for refinancing, movements in European bond prices led to significant fluctuations in the collateral constraints of credit institutions. Jean Barthélemy, Vincent Bignon and Benoît Nguyen document the change in and heterogeneity of these constraints. They assess the impact attributable to the downgrade of sovereign ratings and the decline in asset prices during the European debt crisis on the valuation of collateral available for refinancing. Authors also construct indicators that track the change in the quality and liquidity of posted collateral. Their findings suggest that the flexibility of the Eurosystem collateral framework enabled credit institutions to cushion the shock created by the European debt crisis by depositing assets that were less liquid than bonds without causing a relative deterioration in the average rating of assets posted as collateral compared with the average rating on the market, as measured by eligible marketable assets. 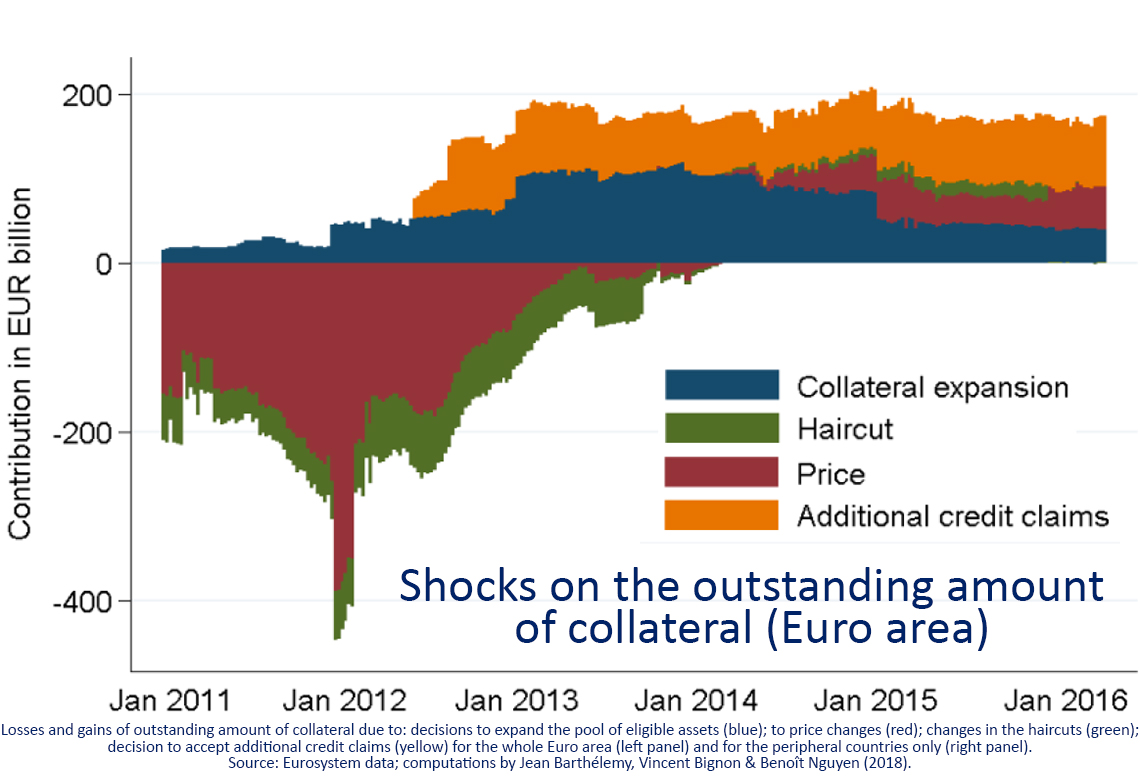 In the euro area, the Eurosystem conducts refinancing operations using loans by the central bank money to credit institutions. These operations are secured by the pledging of assets as collateral. Since October 2008, the only effective limit to the demand for central bank reserves has been the quantity of eligible collateral that credit institutions are able to pledge. Therefore, understanding the distribution and the evolution of collateral constraints during the European debt crisis is important. The aim of this paper is to inform on if and when the Eurosystem collateral framework may have impeded the transmission of monetary policy through binding collateral constraints.

This article studies how the European debt crisis and non-standard monetary policy measures affected the collateral posted with the Eurosystem. Specifically, we offer some statistical responses to the following three questions: (1) How large were collateral constraints? (2) What were the determinants that shaped changes in the collateral available to credit institutions? (3) What changes were recorded in the credit risk of assets posted as collateral for refinancing operations? To answer those questions, we use a base of weekly exhaustive data giving eligible assets as well as refinancing operations and assets posted by each individual counterparty, asset by asset, from 6 January 2011 to 26 May 2016.

Our analysis shows three results. First, at the level of the euro area as a whole, the quantity of posted collateral continued to far exceed the amount of refinancing requested. But we show that there were sizeable disparities between banks insofar as around 10% of them saturated their collateral constraint at one point in time of the 2011-2016 period. This can be linked to the asymmetric impact of the crisis on bond yields: in some countries, up to 80% of posted collateral was used as security for refinancing operations for a few months in 2012.

Second, we document the determinants of the evolution of pledged collateral and hence collateral constraints (see Figure). We find a reduction of approximately EUR 200 billion on the valuation of eligible collateral -a large share affects banks in peripheral countries- due to the fall in sovereign bonds prices concomitant with the sovereign debt crisis. Relative to euro area refinancing, the price shock was equivalent to 16% of the EUR 1.265 billion refinancing peak reached in June 2012. For stressed countries, the maximum price variation corresponded to a EUR 150 billion reduction in posted collateral, equivalent to 40% of the total refinancing of peripheral countries or 27% of total post-haircut collateral posted by the banks of these countries. This shock was partly cushioned by collateral expansions, but also by greater use of collateral provisions in place before the crisis, such as the ability to pledge certain types of loans as collateral. Credit claims as a whole accounted for 26.7% of total post-haircut collateral posted in May 2013. This suggests that it was not only the new expansion measures that made it possible to cushion the price shock, but also and especially the flexibility of the existing operational framework (i.e. most illiquid assets eligible as collateral for Eurosystem refinancing). The framework used to implement the Eurosystem monetary policy, characterised by acceptance of one of the broadest ranges of eligible assets among central banks, thus proved highly resilient to these financial shocks.

Third, we show that the broad range of eligible assets as collateral was not accompanied with a substantial deterioration of the credit risk of assets effectively pledged with the Eurosystem. To document this we compute the weighted average of the credit ratings of pledged assets and we compare it to the average credit ratings of assets that are eligible. The weighted rating of collateral posted with the Eurosystem fell from to A+ from AA in early 2011, in line with deteriorations in individual sovereign ceilings and improved markedly after winter 2012-2013, in parallel with the end of the sovereign debt crisis.