As an extension to the literature on the risk-taking channel of monetary policy, this paper studies the existence of a systemic risk-taking channel (SRTC) in the Eurozone, through an original macroeconomic perspective based on causality measures. Because the SRTC is effective after an “incubation period”, Gilbert Colletaz, Grégory Levieuge and Alexandra Popescu make a distinction between short and long-term causality, following the methodology proposed by Dufour and Taamouti (2010). They find that causality from monetary policy to systemic risk, while not significant in the very short term, robustly represents 75 to 100% of the total dependence between the two variables in the long run. Reverse causality is rejected: systemic risk did not influence the policy of the European Central Bank before the global financial crisis. However, central banks must be aware that a too loose monetary policy stance may be conducive to a build-up of systemic risk. 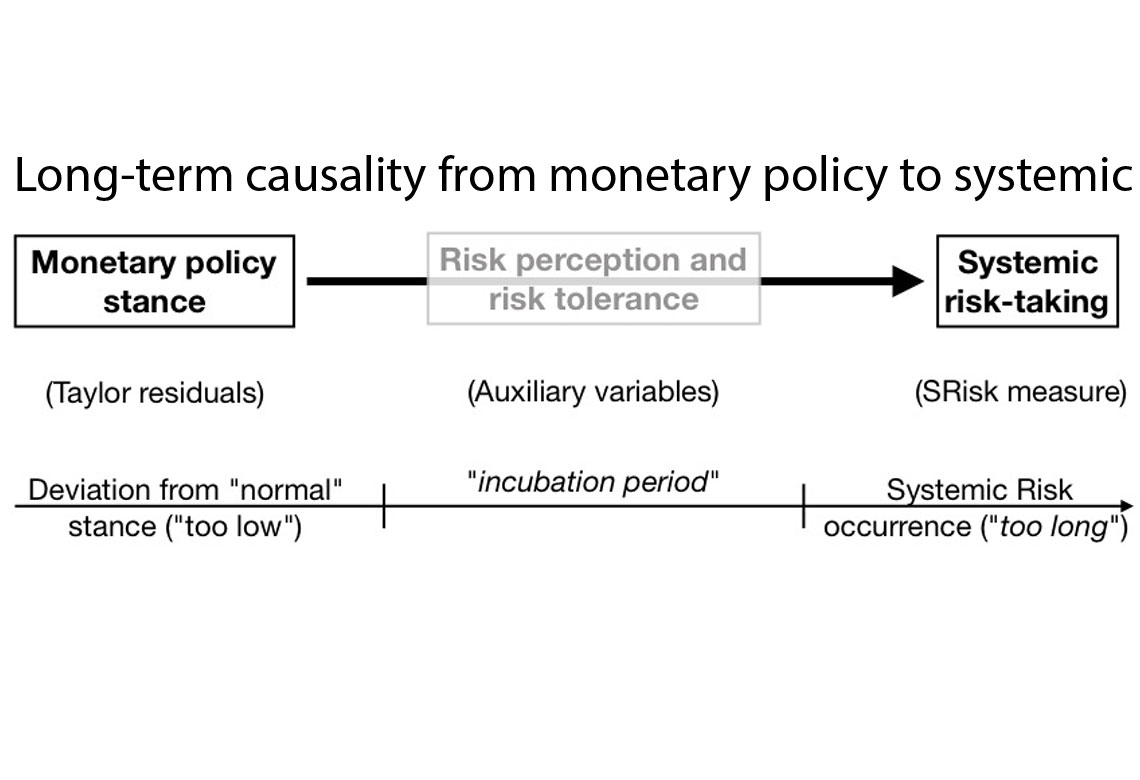 According to the “Risk-Taking Channel” (RTC) proned by many economists, keeping key interest rates “too low, too long” would increase risk perception and risk tolerance. Therefore, the global financial crisis could be at least partly explained by the risky behaviour of financial companies during the pre-crisis period, fuelled by the context of low interest rates, for a protracted period of time.

As an extension to this literature, the objective of this paper is to study the existence of a systemic risk-taking channel (SRTC) in the Eurozone. Our contribution is original in four aspects.

First, while the traditional literature on the RTC mainly refers to “risk” as a liquidity or default risk , we focus on systemic risk, considering that risky activities and positions may spread from banks to the entire financial system.  This echoes a new generation of theoretical models that demonstrate how low interest rates environment are conducive to endogenous build-up of systemic risk.
Second, we adopt a macroeconomic perspective, while the majority of the empirical studies are performed on bank-level data. Third, we search for evidence supporting the SRTC in terms of causality from monetary policy to systemic risk.
Last, as the SRTC assumes that key interest rates have been too low for “too long”, we explicitly consider a long-term perspective. Indeed, the impact of monetary policy on systemic risk, if any, may not be immediate but effective after an “incubation period”.
Basically, a protracted period of easy monetary policy is likely to impact risk tolerance and risk perception, which in turn will have a negative impact on the systemic risk-taking, through an insidious degradation of financial companies’ balance sheets.
Our empirical analysis thus relies on a long-term causality approach. Following the graphical representation above, this consists of testing the causality of the monetary stance to the systemic risk-taking through various auxiliary variables aimed at capturing risk tolerance and risk perception.

We use monthly data over the period 2000M1 − 2008M4. Our baseline measure of the monetary policy stance is based on the deviation of actual interest rates from a benchmark defined by a Taylor-type rule (“Taylor residuals”). The systemic risk is captured by the aggregate SRisk measure. Basically, this measure represents the total amount of capital that would be needed to bail out the financial system if a financial crisis were to occur. This measure of systemic risk has proven to be relevant and provides fair early warning signals of on-going financial distress. Finally, auxiliary variables are made of alternative proxies accounting for the global risk perception, the perception of firms’ riskiness and the perception of banks’ riskiness.

In most cases, we find causality from monetary policy to systemic risk to represent 75 to 100% of the total dependence between the two variables in the long run, even though it does not appear significant in the very short term. This validates the existence of a SRTC in the Eurozone on the eve of the global financial crisis.
Causality from systemic risk to the monetary policy stance is also estimated.
Our results show no such causal relationship in this direction. This is not surprising as financial stability was not an objective per se for most of the central banks before 2008. Until recently, policymakers could not even rely on reliable indicators of risk, such as the Srisk measure. Finally, central banks must be aware that a too loose monetary policy stance, for a protracted period of time, may be conducive to negative externalities such as the progressive build-up up of systemic risk.