This paper investigates the ability of monetary policy rules to coordinate private agents' expectations when the enforcement of rules is limited. We show that limited enforcement precludes diverging inflation paths ensuring that nominal variables remain bounded in equilibrium. When applied to Taylor rules this makes the Taylor principle necessary and sufficient for price determinacy. However, limited enforcement also allows agents to rationally anticipate multiple policies and we show that, in general, there is no policy rule able to recoordinate any private agents' belief on that rule. We finally provide conditions under which such recoordination may take place. 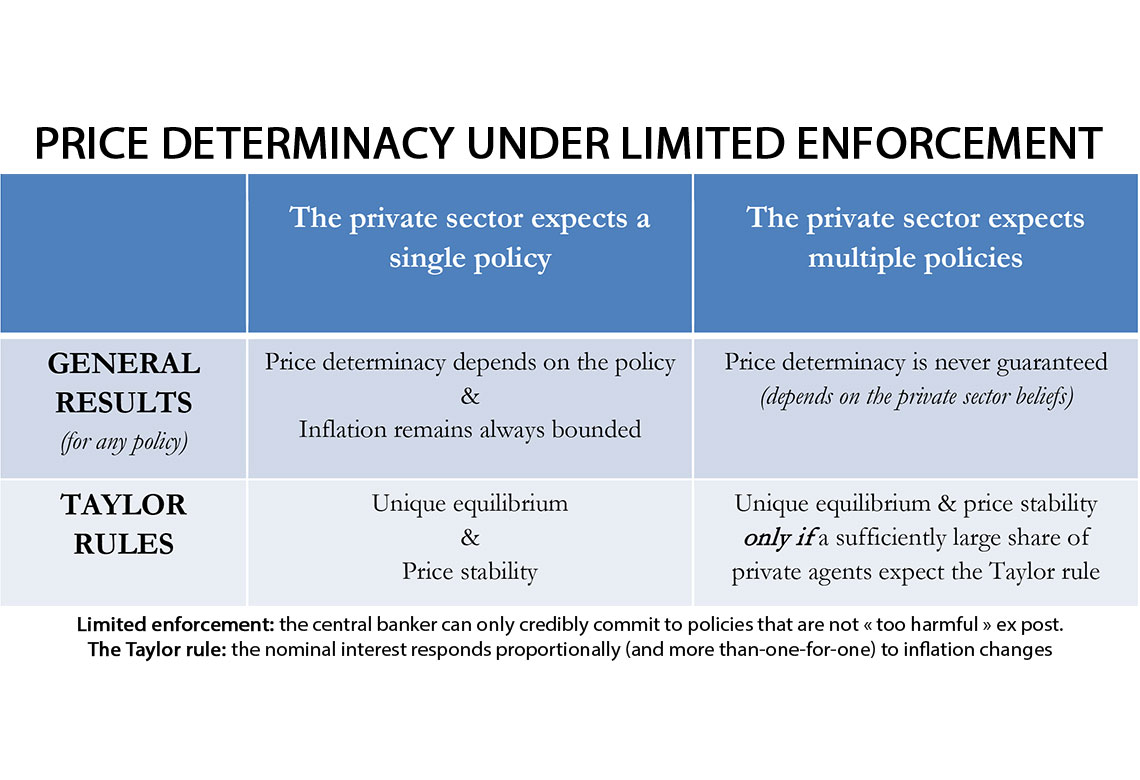 However, policymakers sometimes prefer to breach the rule, e.g., when the cost of adhering to the rule becomes larger than the cost of breaching the rule. Indeed, the enforcement of a policy rule is unlikely to be unlimited. But if rules can be breached, what can we really expect from a policymaker following a policy rule? Does the possibility to breach the rule completely delete the usefulness of rules and especially the ability of rules to guide private agents’ expectations on a unique desired equilibrium – so called price determinacy?

In this paper, we investigate the ability of policy rules to coordinate private agents when the incentives to follow through on rules are limited. We characterize the set of equilibria produced by policy rules under limited enforcement and we provide conditions under which the expectation of a policy rule ensures price determinacy and, more generally, conditions under which the central bank can coordinate private agents on its desired outcome.

Our first key but intuitive result is that, when enforcement is limited, the equilibrium rate of inflation is bounded across all equilibria. Diverging inflation paths ultimately lead to

This simple result has three main implications in the context of monetary policy. First, it is necessary and sufficient to look for nominally-bounded equilibria to check determinacy. In the case of linear policies, this amounts to check Blanchard and Kahn (1980)'s conditions. Second, if enforcement is believed to be limited, there is no point trying to design rules aiming at ruling out unbounded nominal paths, as only bounded allocations matters for determinacy. Third, we show that, under limited enforcement, the Taylor principle -- the nominal interest rate has to respond by more than one-for-one to changes in inflation -- is both necessary and sufficient to ensure determinacy.

But limited enforcement may also allow agents to anticipate other policies thus leading to alternative equilibria. In the end, the central bank may potentially fail to coordinate agents not on the outcome given a policy - as for determinacy - but simply on the policy. Using central banker's words, there is a risk of disanchoring: agents expecting other policies -- as potentially observed in survey expectations -- start having views on future outcomes inconsistent with the central bank's policy.

In this extended framework, we first show that there does not exist a policy that, whatever prior private agents' policy beliefs, would allow the central bank to solve the coordination failure and lead private agents' to change their beliefs accordingly. Prior policy beliefs determine the equilibrium that arises and the policymaker cannot always curb these policy beliefs to coordinate expectations on the desired policy.

Despite this negative result, we show that some rules may still have the power to curb some inconsistent policy beliefs. This happens under three conditions: i) private agents must hesitate only between policies that can be distinguished, ii) there is a sufficiently large number of agents expecting the central bank's desired policy and iii) the central bank's policy leads to sufficiently large long-term gains compared with the other policies expected by the private sector. Under these conditions, the central bank finds optimal to follow its intended rule, which ultimately leads all agents to update their policy beliefs. We provide examples of such recoordination of policy beliefs when prior beliefs are not too far from the intended rule in the context of the Taylor rule.

In the end, our paper suggests that standard determinacy problems are not as important as usually argued because limited enforcement reduces the set of equilibria. However, our results emphasize that coordinating private agents’ beliefs on a particular policy is not always possible because agents' beliefs alter the central banker's incentives to follow through a given policy. We find situations in which there exists a threshold on policy beliefs below which the policymaker has no incentives to follow his desired policy: This echoes the regular emphasis put by central bankers on the risk of inflation disanchoring and on the monitoring of private agents' expectations as if they fear that nominal disanchoring were a non-linear mechanism alike a threshold switching.