At the end of 2017, non-residents held EUR 569 billion worth of shares in French CAC 40 companies out of a total market capitalisation of EUR 1,332 billion, representing an ownership rate of 42.7% – down for the fourth consecutive year. 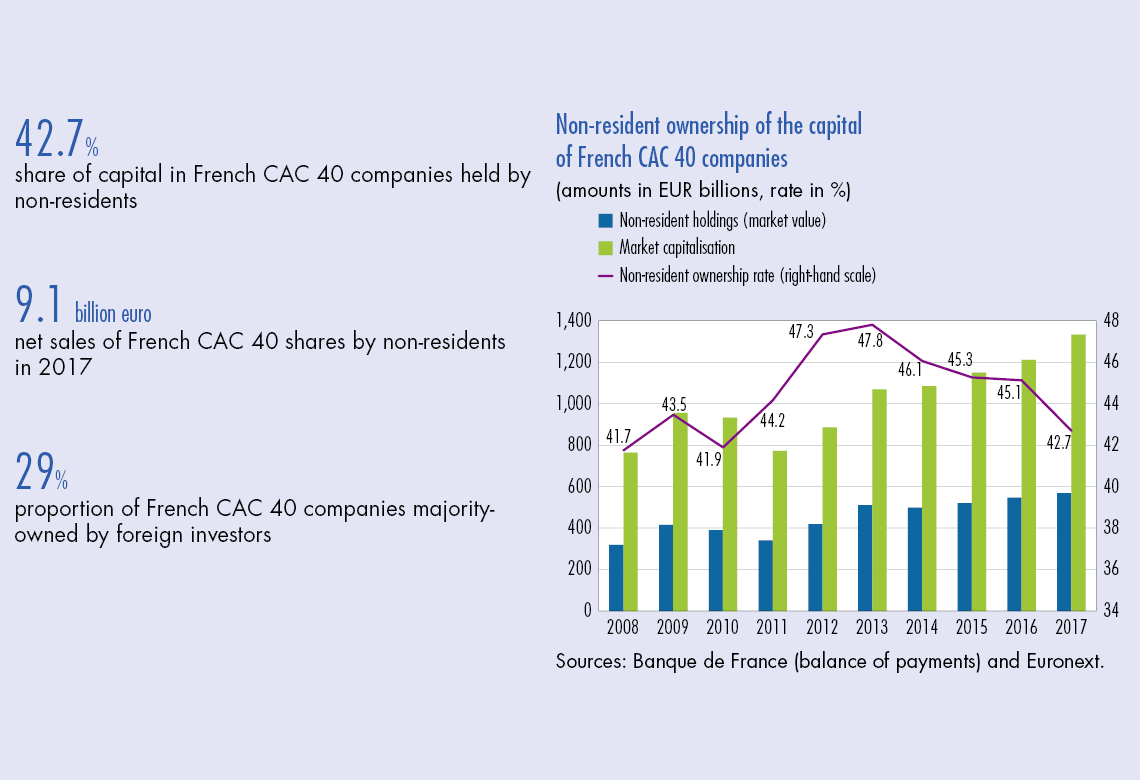 As at 31 December 2017, non-resident investors held 42.7% of the total value of shares in the 34 French companies listed in the CAC 40.1 The figure was down 2.4 percentage points compared with the previous year (see Chart 1), continuing the decline observed since 2014.

As at 31 December 2017, of the 34 French companies included in the CAC 40 index, only ten were majority owned by non-resident investors, down from 11 in 2016 and from 19 in 2013 (see Table 1).4 In general, those companies with the highest rates of non-resident ownership in 2016 were also those that registered the biggest falls in this rate in 2017.

Conversely, the biggest rises were seen mainly at companies with the lowest rates of non-resident ownership in 2016 (see Chart 4).

On average, the more volatile a company’s share price, the smaller the proportion of its capital that will be held by non-residents.5 This cross-sectional correlation holds true for nearly every year since 2008, suggesting that investors have a preference for stable stocks – as confirmed by an econometric analysis (see Appendix 2).

Non-resident ownership has declined in the majority of sectors

Only the technology and telecommunications sector saw a rise in the proportion of shares owned by non-residents in 2017. Financial corporations, meanwhile, registered the biggest fall (see Chart 5).

Article 1 : Non-resident holdings of French CAC 40 shares at end-2017
Article 2 : Commercial real estate: is there a risk of a financial bubble?