This paper combines different sources and methods (income tax data, inheritance registers, national accounts, wealth surveys) in order to deliver consistent, unified wealth distribution series for France over the 1800-2014 period. We find a large decline of the top 10% wealth share from the 1910s to the 1980s, mostly to the benefit of the middle 40% of the distribution. Since the 1980s-90s, we observe a moderate rise of wealth concentration, with large fluctuations due to asset price movements. In effect, rising inequality in saving rates and rates of return pushes toward rising wealth concentration, in spite of the contradictory effect of housing prices. We develop a simple simulation model highlighting how the combination of unequal saving rates, rates of return and labor earnings leads to large multiplicative effects and high steady-state wealth concentration. Small changes in the key parameters appear to matter a lot for long-run inequality. We discuss the conditions under which rising concentration is likely to continue in the coming decades. 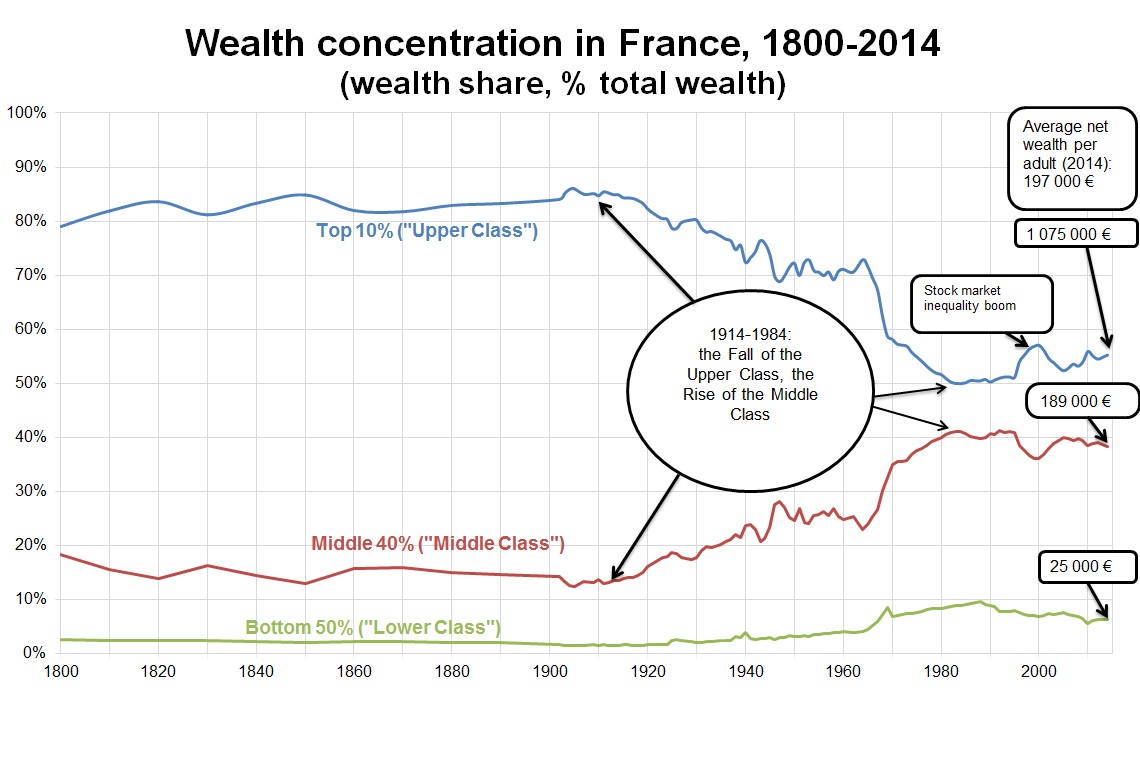 In France, the strong decrease in wealth inequality starts at the beginning of the 20th century. The share of total wealth held by the richest 10% decreases from more than 80% at the beginning of WW1 to 50% in the mid-80s. Meanwhile, we observe the “middle class” (middle 40%) rises and its wealth share ranges from 15% in 1914 to 40%. First, the rise of the middle 40% share during the 1914-1945 period is not due to the fact that the middle class accumulated a lot during this period. It simply corresponds to the fact the richest 10% were relatively more stricken by wealth shocks during this period (in proportion of their initial wealth). In contrast, during the post-war decade, the rise of the middle class corresponds to a significant rise of their absolute wealth level.  A slight and continuous increase in inequality and with large fluctuations around 2000 due to financial asset price movements, since the portfolios of the top wealth shares are mainly composed them. The rise of housing prices observed in the 2000s has an ambiguous effect. It leads to a decrease in inequality between the middle class (whose portfolios are mainly composed of home owner housing) and an increase in inequality between the middle class and the poorest individuals (bottom 50%), and makes it more difficult the access to homeownership. Inequality in labor earnings, rates of return and synthetic saving rates are key-determinants to understand wealth concentration. We use the strong differences in these parameters observed between 1970-1984 and the 1984-2014 periods to show how small changes in these determinants are associated with strong differences in wealth concentration dynamics.