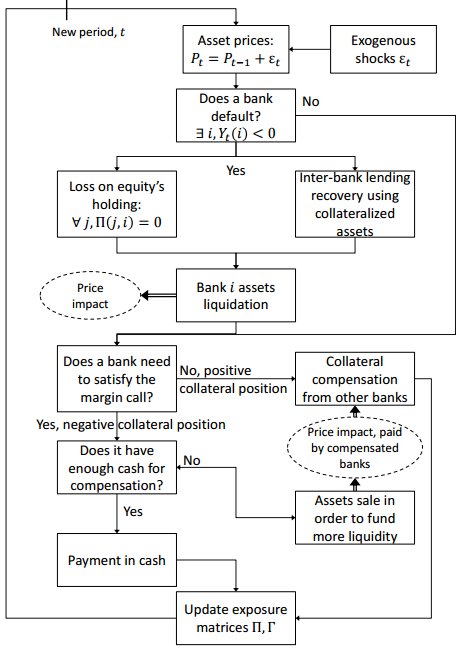 From a Macroprudential policy perspective, the ambition to add a macroprudential layer in stress- testing strategies is coherent with the ambition  not to safeguard  and  supervise only individual entities, namely banks, but to understand the rising vulnerabilities of the entire financial system. The principle that a micro-regulation of banks and markets was enough to prevent the financial sphere from systemic crises has been wrong since 2008. Many banks could be solvent and liquid in a static approach, but completely insolvent or illiquid in a dynamic approach. Domino effects, partial defaults, asset market devaluation or interbank freeze can strongly impair the whole financial system when all risks are highly correlated. So far, stress-testing approaches have the main limitation to adopt a static approach which has obvious limitations in this regard by ignoring financial contagion.

Financial contagion, in the literature, has recently been considered through market dynamics and/or correlations of asset prices especially in times of crisis. Several papers have developed such systemic risk measures, relying on market data as the SRISK measure of Acharya, Pedersen, Philippon, and Richardson (2010) enriched by Acharya, Engle, and Richardson (2012), the Composite Indicator of Systemic Stress [CISS] from Hollo, Kremer, and Lo Duca (2012), the Granger causality based approach of Billio, Getmansky, Lo, and Pelizzon (2012) or the Marginal Expected Shortfall of Brownlees and Engle (2012).

These models derived indicators of systemic risk in reduced form i.e. they do not structurally explain why  distress  could  propagate  in  the  financial  system  and  are  merely  market  approximation/ perception of contagion risks.

Another  strand  of  literature  underlined  the  importance  of  networks  to  understand  financial contagion. This was especially highlighted in Allen and Gale (2000), Eisenberg and Noe (2001) or Gouriéroux, Héam and Monfort (2012). These models incorporate some structural features in contagion analysis but are often insulated from other parts of the financial systems as asset markets. Greenwood, Landier, and Thesmar (2015) have made such an attempt by building a framework in which regulatory constraint may force banks to liquidate a part of their portfolio, taking into account the interaction between the balance sheet composition of banks and asset markets. However there is no direct links between banks through the interbank market.

Our paper builds on these different approaches.  Our starting point is the bank network inspired by Gouriéroux, Héam, and Monfort (2012). In their framework, the model aims to "distinguish the exogenous and endogenous dependence" drawing on the Merton (1974) balance sheet model to determine the impact of an exogenous shock on a bank network. Bank assets are split into three parts as bank equities, bank debt and other assets named exogenous assets. A credit institution defaults when its liabilities are superior to its assets meaning the defaulted institution has no more equity. The network converges to the equilibrium once no more default is observed.

Our  first  input  is  to  add  to  this  framework  an  interbank  market  where  banks  have  access  to collateralized loans: in addition to cross holding equity, banks are thus exposed to each other on the liability side regarding cross holding of interbank repo contracts. The main issue is that these loans are collateralized and thus, subject to margin calls if the value of the collateral is negatively impacted. It creates additional market contagion, such that all assets that banks have on their trading book could be impacted if they are correlated with assets used as collateral. Moreover, while Greenwood, Landier, and Thesmar (2015) use a diagonal price impact matrix, we introduce asset price correlations such that there is a cross market impact of bank deleveraging dynamics. To sum up, our model takes into account several aspects of contagion: (i) Bank solvency contagion (via cross holding of equity); (ii) Bank liquidity contagion (through collateralized interbank loans and margin calls); (iii) Fire-sales dynamics leading to market contagion (when banks suffer liquidity shortage).

The advantage of such a framework is to give policy-makers an analysis of sensitivity of the banking system to shocks, that may not have a direct impact on bank balance sheets (for example the impact of shocks in a market on a bank with no market activity) but have second round effects when the shock propagates through some specific banks, particularly contagious ones, giving rise to financial pandemic. Finally, this framework allows us to test for the optimal design of some policy action aimed at neutralizing some channels of transmission in times of distress: we shown that it could be optimal, in order to limit bank distress, to lower margin calls or to take action in such a way that financial assets used for collateral should be characterized by very high market liquidity.