Working Paper Series no. 848: Paying Banks to Lend? Evidence from the Eurosystem's TLTRO and the Euro Area Credit Registry

Since March 2020 the Eurosystem has provided subsidies to Euro-Area banks, via its Targeted Longer-Term Refinancing Operations (TLTRO). Under this program, banks can borrow from the Eurosystem at a rate as low as -1%, conditional on their lending to the real economy. This paper uses a simple theoretical model to disentangle between so-called “targeted” and “profitability" channels. We test those channels on the new Euro-Area credit registry data (AnaCredit). To overcome reverse causality, we employ novel identification strategies based on TLTRO parameters set before the pandemic and unexpected changes afterward. We find support for both channels and conclude the targeted channel is stronger. 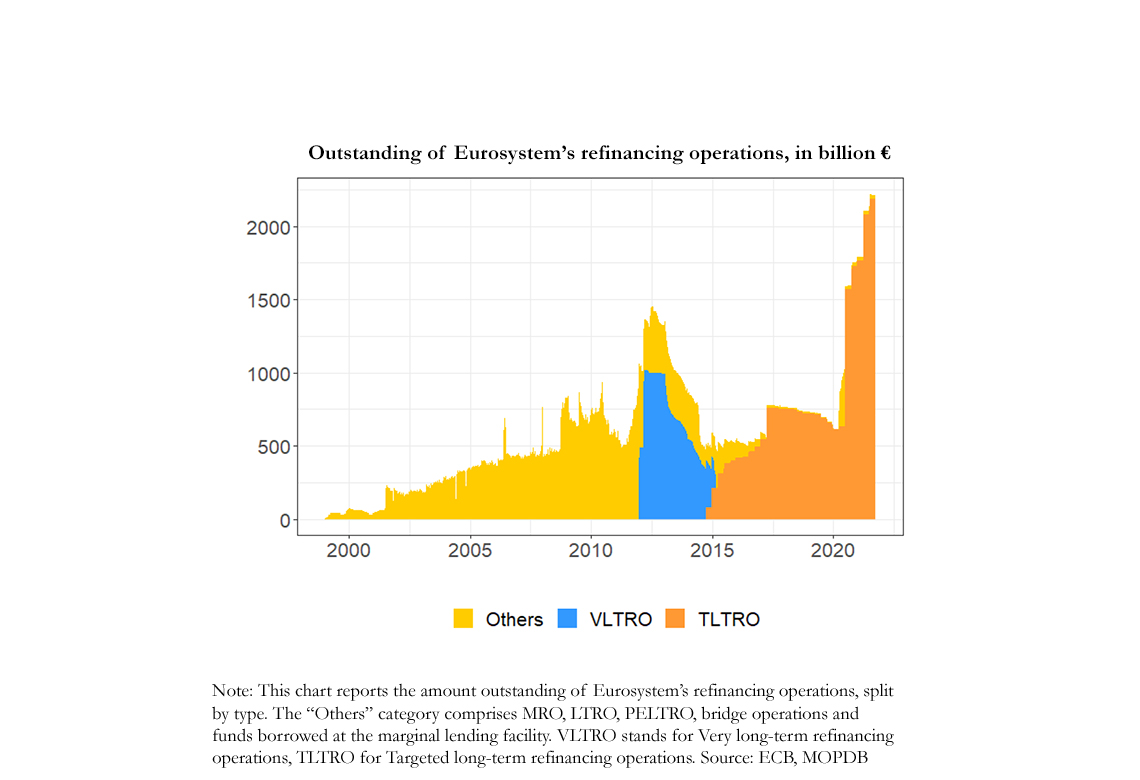 On 12 March 2020, the Eurosystem changed the pricing of «Targeted Longer Term Refinancing Operations» (TLTRO) and made the program fundamentally different from any other central bank schemes we know of. With this change, banks could borrow for at least two years at a rate as low as -1%, if they exceed the lending target set by the Eurosystem. For the first time in its history, the Eurosystem lends at a rate lower than the remuneration of banks' reserves (currently -0.5%). Thus, banks can borrow at the TLTRO and (on aggregate) immediately redeposit these reserves with the Eurosystem at a higher interest rate. TLTRO therefore allow banks to make a 50 basis points margin, an extremely profitable trade by the standards of the money market.  While many monetary policy measures can have incidental redistributive effects between different groups (e.g. debtors vs. creditors), TLTRO III are unique as they imply a direct transfer from the central bank to the commercial banks.
At the time of writing, there were EUR 2,190 bn of TLTRO III borrowings outstanding, meaning that the Eurosystem could pay a subsidy up to EUR 11 bn per year (2,190 times 50 bps).
The main theoretical insight of our paper is that TLTRO stimulate the supply of so-called “eligible” (i.e. loans that mature after 31 March 2021) loans as long as banks have not reached the lending target set by the central bank to get the most generous interest rate. We call this channel the “targeted channel". Once banks have fulfilled the lending target set by the central bank TLTRO may still stimulate credit by increasing bank’s profits, a channel we call the “profitability" channel. This second channel may affect all loans (“eligible” and “ineligible” loans).
Evaluating empirically the effects of this program on bank lending is challenging mainly due to reverse causality. Banks decide whether to participate or not to TLTRO operations. Reverse causality arises if banks participating to the TLTRO were doing so because they expected their lending performance to exceed the target set by the Eurosystem (and that they would pay the most favorable interest rate, at -1%).
To overcome these two issues, we use a simple feature of the program. By construction, lending performance of banks is measured over some time period, called the “reference period”. This strategy allows to estimate the effect of TLTRO through its “targeted” channel by looking at the systematic difference between eligible and ineligible loans.
We find large, significant and robust effects of the “targeted” channel. Our most saturated regression shows that for banks that participated to TLTRO, the origination of “eligible loans” increased by 32% in the quarter immediately after the announcement of the subsidy, and by 19% in the following quarter. Conditional on participating to TLTRO, borrowing 1% more from the central bank stimulates credit to non-financial corporations by 0.15% in the following two quarters, via the targeted channel.
As for the profitability channel, results from an instrumental variable approach point to an effect on all types of loans (eligible and ineligible). We find a stronger effect for eligible loans than for ineligible loans (elasticity of TLTRO to loan supply of 0.16% vs. 0.05%) in line with what we expect: eligible loans are affected by both the targeted and the profitability channel, while ineligible loans are only affected by the second channel. Similarly, we find that banks already fulfilling their lending target are less responsive than other banks. These results suggest that the profitability channel while also effective, is weaker than the targeted channel.